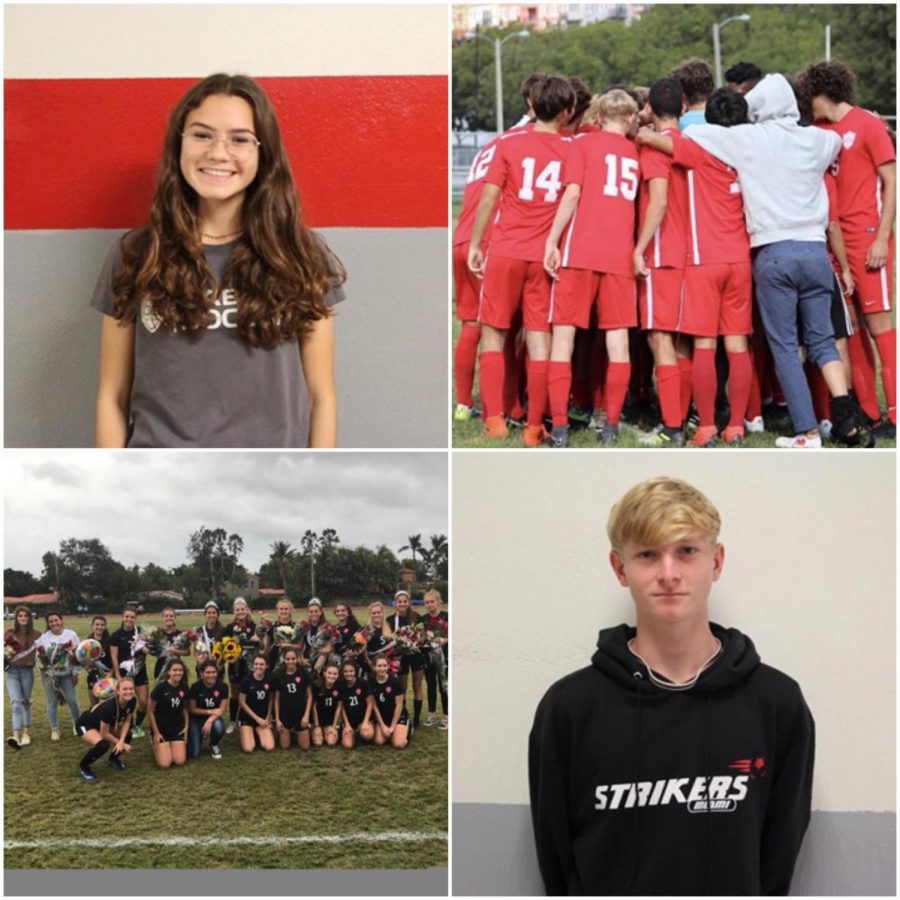 Every two weeks, CavsConnect will be selecting two exemplary athletes and recognize them for their athletic prowess and ability in their sport. Below are the athletes spotlighted for their performances between Nov.19 and Dec.1.

In an effort to find a fun sport to participate in, sophomore Nina Montero began searching at an early age until she found one she truly loved. Since the first time she played soccer, she has felt an ever-growing passion for the sport, prompting her to join a variety of club soccer leagues and the Lady Cavalier Soccer team. To many, it can become difficult to maintain a balance between playing a sport and juggling academics. However, Montero views her love for soccer not as a burden on her shoulders, but as an escape from the stresses that her difficult academic schedule creates. Montero hopes that, over the years, she can further grow with her teammates on and off the field.

Montero’s passion for soccer has instilled qualities of leadership and commitment within her and they have become evident when she is not on the field. She is currently part of the International Baccalaureate Program and is a member of the  National Honor Society and International Baccalaureate Honor Society.  Although she has a devoted passion for soccer, Montero believes that her teammates are the ones who make soccer so fun for her and are a major reason for her continued dedication to the sport. Whether they win or lose a game, her team always brings out the best in her.

On an average week, she practices with her club team twice a week and practices with the Gables soccer team from Monday through Friday. After high school, Montero hopes to attend the University of Florida in hopes of studying forensic psychology and marine studies.

Were you on the soccer team previously and, if you were, for how long?

I’ve been on the school team since my freshman year.

What inspired you to start playing?

When I was younger, I tried out for a lot of different sports, trying to find the one that most interested me. So when I started playing soccer in first grade, I expected it to be fun, but not something I would make a decade-long commitment to. Instead, I came to love the sport and have played for a variety of club and school teams going into high school.

To train, I attend practice every day and have games between two and three times a week.  In addition, I practice with my club team twice a week.

What’s your favorite thing about being part of the team?

I would say that my favorite aspect of being a part of the team is being with people that share my same interests.  In addition to the friendships and improving my skill, playing with girls that I can hang out with is really important to me.

For me, soccer has always been a way for me to escape from my studies and just do what I love.  While I play soccer, it allows me to take a break and relax from my studies so I’ve never had to try to balance one or the other.

What are your goals for the season?

Other than just improving my skill, I would say that a goal I want to achieve this season is to become even closer to all my teammates.  I’ve always felt like the best teams are the teams that are closely bonded because they’ll be a team on and off the field.

The best memories I have from playing with the team are the bus rides to and from games.  Whether we’ve just had a great game or a tough one, we’ll all play games on the bus and tell stories and that’s always great.

How would you describe yourself as a student when you’re not out in the field?

When I’m off the field, I’m usually doing my homework or studying.  Because of this, I would say that my academics are one of the most important aspects of my life and they always have been.

Since Jason Wood was a toddler, he has aspired to be part of a professional soccer team and has worked endlessly to improve himself as an athlete and individual. A junior in the International Baccalaureate Program, Wood spends most of his days either focusing on his academics or practicing for an upcoming soccer game with his team. In order to strengthen his soccer skills and grow as an athlete, Wood plans to spend even more hours on the field and push himself harder than ever before to reach his goals for the season and to make his team stronger.

In their previous season, the Cavalier Boys Soccer team placed second in Districts and they are now working incredibly hard to surpass last year’s performance. As the season progresses, Wood plans to continue working diligently alongside his team to achieve his goal of winning GMAC, Districts and States. However, soccer has become more than just a sport for Wood; it has become a family in which he can continue to grow with his friends and further cement their bonds with each other. Wood’s team greatly motivates him to further improve his skills as a soccer player and person. He has been part of the Gables soccer team since his sophomore year and he definitely does not plan on leaving. With only a year and a half of high school left for Wood, he looks forward to continuing his passion for soccer at a collegiate level.

Were you on the soccer team previously and, if you were, for how long?

Yes, I was on the soccer team last year and this is my second year.

What inspired you to start playing?

What inspired me was that I wanted to become a professional soccer player since I was very young.

My training starts off with a warm-up, so I’ll jog around for 10 minutes and then I will stretch to keep myself warm. After, I will do multiple drills that utilize different skill sets in soccer.

What’s your favorite thing about being part of the team?

My favorite thing about being on the team is that I get to be with people that help me get better in everything I do.

I balance my athletics and academics by first going to practice and when I get home, I’ll start my homework right away.

What are your goals for the season?

My goals consist of being a better soccer player and winning Districts, GMAC and States.

The best experience I have had with the team is scoring a goal against South Ridge earlier this season.

What have you achieved in previous seasons?

We were able to be the second best team in our district and be finalists in District Championships.

How would you describe yourself as a student when you’re not out in the field?

I am a pretty hardworking student off the field. I always prioritize doing my homework when I get home or go to my next practice and I try to pay attention in class as best I can.