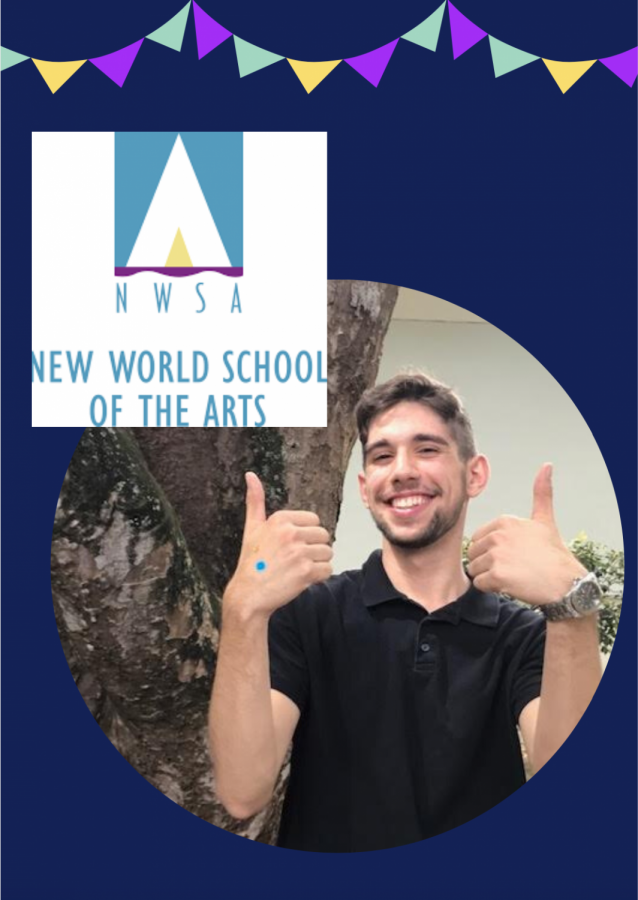 Senior Jorge has led an interesting school year. At the start of the year, he was invited by the SCHOLAS Organization to fly to Mexico and work with the Pope and others in hopes of working to bridge together different cultures and communities. Their main points of discussion were better the community children’s education and humanitarian work. After several very successful meetings, Valero was invited to perform the closing speech for the program. Astonished by his perspective and words, the program invited him to attend another conference in Los Angeles, California. Aside from the work Valero has done for his community, he is the current president of Troupe 0476 and has had a true passion for acting while in high school, and on stage, he feels his most confident self. This love has led Valero to accept the offer of admission granted to him by the New World School of the Arts (NWSA), where he will continue pursuing his passion for theater throughout college.

Q: Before you committed to New World, were there any other schools you were considering attending?

A: I was considering attending Florida International University. I considered majoring in Biology for an undergraduate degree. After those four years had passed, I would take my Biology degree and apply to medical school. This was the plan but after being offered admission into NSWA, I decided against that plan.

Q: What made you commit to New World instead of the other schools you had already heard from, if there were any?

A: Getting into NWSA allowed me to study something I love, so I would much rather take it over something I enjoy. While I have loved studying Biology and could see myself pursuing this other passion of mine, I do not want to give up the opportunity that is already here.

A: Personally for me, the college application process was not as daunting as I felt the CARS program, or really everyone, else made it out to be. If anything, it just takes someone to take you step-by-step through it. I sat with a good friend and he helped me with a lot of the questions I had when I could not meet with my counselors. A lot of the applications and forms were simple to follow, and the deadlines were fair. I just think it is imperative to stress that students need to start preparing at the beginning of their junior year and be ready to submit their essays and other required documents by the start of their senior year. It is a quick change between the end of junior year to the beginning of senior year. To not become overwhelmed with assignments, applying for college and meeting deadlines should be at the top of your priorities. By creating a schedule that works best for you, you can ensure that every deadline is met and there are no later regrets.

Q: What is your intended major in New World?

A: My intended major at New World is to study Musical Theatre.

Q: What career path do you wish to pursue in the future?

A: I intend to find a career in Musical Theatre at Broadway and then perform for as long as I can. I am also interested in film acting, but that would be a little more ahead in the game and later on in my life.

Q: Have you always been passionate about this career path?

A: I was not always passionate about this, but I have been for a while. For as long as I can remember, I have always wanted to be a scientist; I love ecology and the marine and botanical sciences, but for the amount of studying and training it takes to get, what I would describe is an okay-paying job, I would rather do something that I truly love. I did theatre in middle school and then again in high school. In my sophomore year, I was introduced to Musical Theatre, and I just fell in love with it. Being a musician, I loved the rhythm and singing, and I have wanted to do it ever since. As a result, I became president of our School’s Troupe, and have worked with the rest of the board to diligently work on the best possible acts for competitions and performances. With as much passion as I carry for Musical Theatre, I think I have got a pretty good chance of excelling with this career path in the future. I just have to stay focus, just like any other professional.

Q: Do you have any advice you would like to give to others readying themselves for the college application process?

A: Advice I want to give to the underclassmen is to most definitely learn how to manage your time wisely. The college application process itself is not overwhelmingly long, but it will accumulate if you forget to do things on time. Anything you can do over the summer, you should do. I feel this includes works like essays, your resumes, perhaps researching and engaging in work, research, or volunteer opportunities. Then, all you will have to do is prepare, prepare, prepare! Something I do want to note though, just because your backstory may not seem as exciting as the next person’s, it does not mean it does not deserve to be told! Be the ‘you-est’ you that you can be. At the end of the day, that is who colleges want to see.

As Valero prepares the next years of his life, he will continue to live as true to himself and his passions as he can. Now with the opportunity to continue his studies at New World, he will surely grow into the best possible version of himself, one that keeps his passions constantly fueling his desire to impact the world.