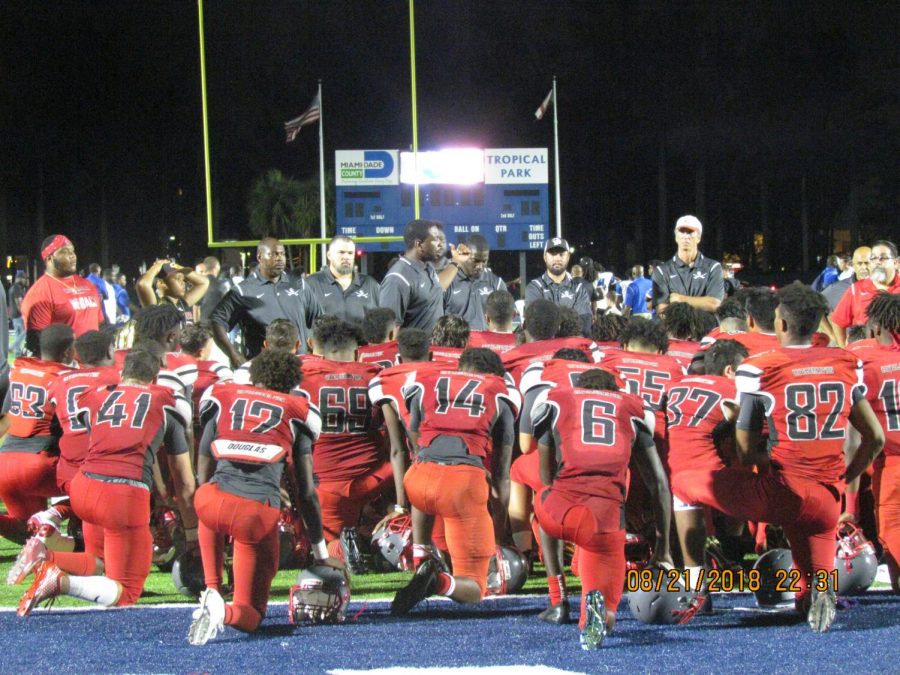 After a disappointing first game, the Cavaliers hope to bounce back and reclaim their former glory.

On a humid night, with a glowing full moon in the sky, the Cavaliers varsity football team were set to confront their opponents: the South-Dade Buccaneers. For teams throughout high school football, winning the first game of the season can be a true stepping stone for the future. Beating your opponent in the first game starts the season off right, boosting confidence and team morale.

After a disappointing season last year in which the Cavaliers ended up with a 4-5 record, the  State Champions were more than ever hungry for victory.

Following a two-month summer break, the Cavaliers were eager to start the season off with a two week camp period. Warming up, the Cavs looked set to conquer the world, with every player focused, analyzing the game and preparing themselves to face an aggressive South-Dade team.

”Right now, I am just looking for effort, alignment, assignment and attitude. It’s not about results. It’s about what’s going on and what’s taking place,”head football coach Roger Pollard said before the game. “They are going to be big, strong, physical, they are every year. They have great football players, and it’s going to be a tough match up.”

While the players were warmed up, and the coaches prepared their game tactics, the Cheerleaders and Gablettes, took to supporting their team like never before, sparking excitement in the players as well as the crowd, setting up the Cavaliers for a great performance.

The Cavaliers kicked off the first game of the season, with a sense of intensity and excitement. The Buccaneers, however, started the game in incredible fashion, gaining 35 yards on a long pass from quarterback Demetrius Randolph, starting off a threatening first drive down the field. Two plays later, South-Dade opened the scoring with a short touchdown run. The Cavs, on the other hand, could not capitalize on their plays and failed to put points on the board, heading into the second quarter down 7-0.

The second quarter began much like the first, with the Cavs struggling to find their offensive groove and South-Dade making headway through the passing game. However, with five minutes and thirty-eight seconds left in the half, the Cavs finally broke through the Buccaneers defense, scoring a touchdown on a short pass from quarterback Gerald Williams. They were not able to convert the extra point and headed to the locker room with an eight-point deficit, 6-14, at the half.

The rest of the game went on with several penalties on both sides, with neither team taking the ball to the end zone. Unlike the first half, both teams were unable to find any offensive rhythm, leading to a more cagey defensive affair. After a last-ditch drive was thwarted by a last-second interception, the Cavaliers were unable to tie the game, which finishing 6-14 in favor of South-Dade. The football team will face Edison on Aug. 30, looking to bounce back from a closely contested loss and continue their resurgence this season.