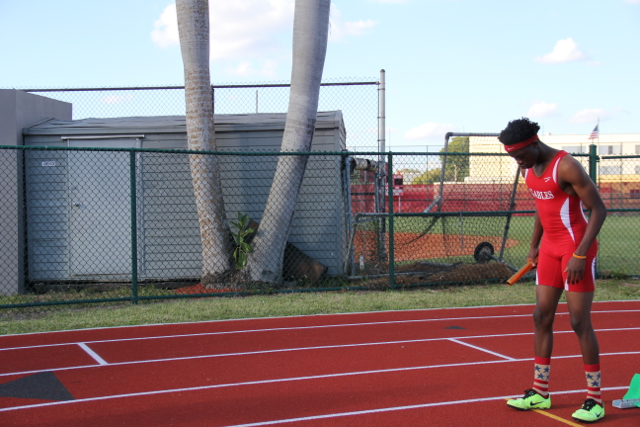 The track and field team had a great first meet and is ready to take on the rest of the season.

The track and field team got a taste of what this year is going to be like in their preseason quad meet this past Thursday, Feb. 11. Although it did not count towards their record for the regular season, Gables made sure to give it all they had as it was their first meet of the year.

“Our expectations for the team are to become better as a team, and for out athletes to break their own personal records. We want reach our goals to win a district title and work out way to States,” Coach McNatte said.

Other schools that were at the quad included Ransom Everglades, Pine Crest and Calvary Christian. Since it was a practice meet, the players and runners got to try out new events that theyn’t usually c doompete in. Another thing that changed this year was the coaching staff. New to the team is Coach McNatte, who has already started practicing with the team and is helping them excel in their events.

“It was different having to go out of my comfort zone and trying a new event, but since I tried the new event I realized that I’m not really meant for longer distances since I am a sprinter. It was cool to try something new,” junior Gabriela Vega said.

Make sure to keep up with the track team as they develop throughout the year. The next meet that the track and field team will be competing at is at the Booker T. Quad on Thursday, Feb. 25 at Booker T. Washington High School.