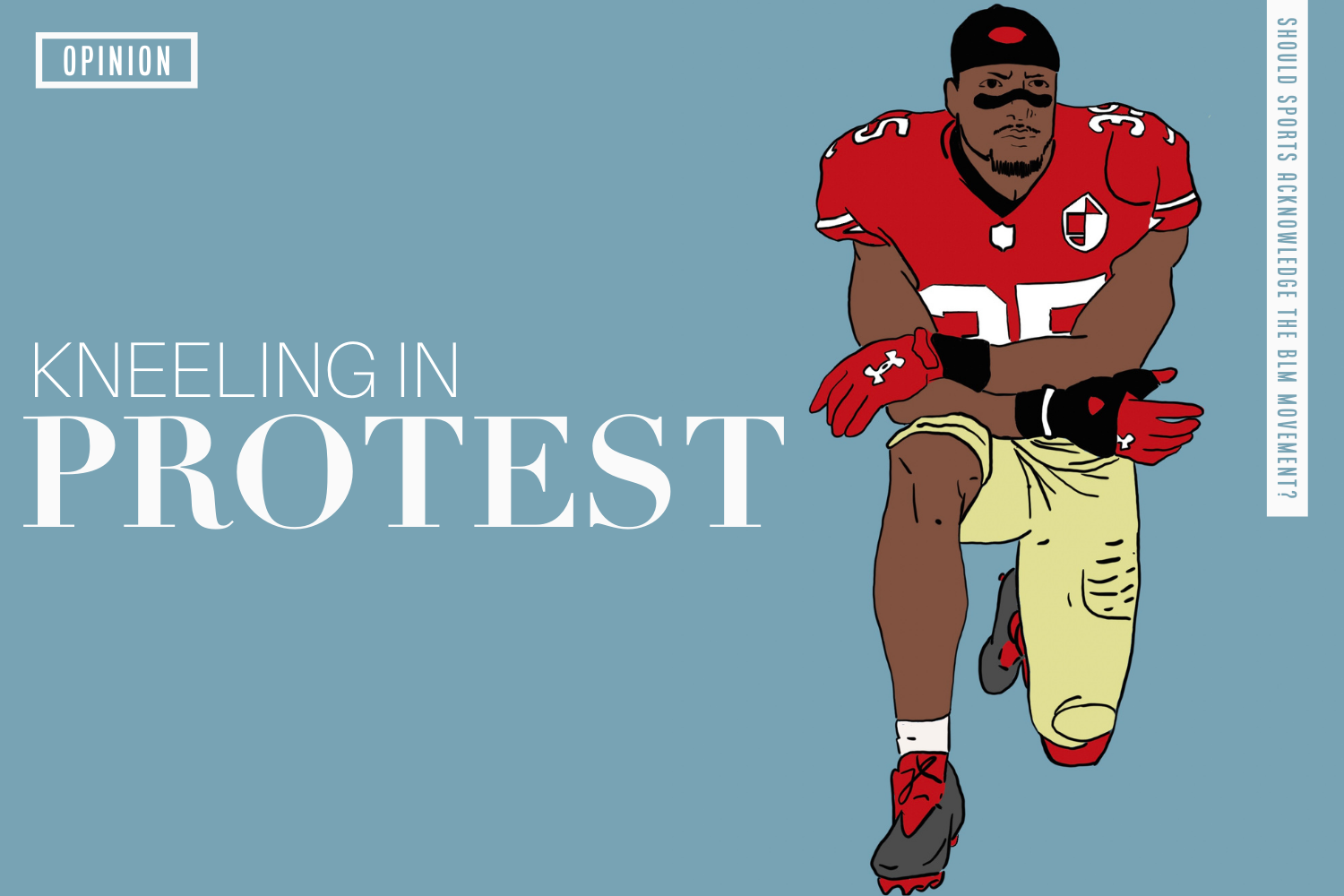 Since Colin Kaepernick first knelt during the national anthem six years ago, protests against systemic racism have sparked many debates. However, they are important to establish dialogue surrounding important issues. (Natalie Abrahantes)

Since Colin Kaepernick first knelt during the national anthem six years ago, protests against systemic racism have sparked many debates. However, they are important to establish dialogue surrounding important issues.

Should Sports Players and Teams Acknowledge the BLM Movement?

With the latest upbringing of the Black Lives Matter movement, many sports teams and individuals in athletics have spoken out or protested regarding police brutality and systemic racism that the Black community currently faces. Below is a side-by-side piece representing both the positives and the negatives of this outcry. As a reminder, these are opinions of members of the staff, and are not affiliated with CavsConnect’s views as a site.

The Power of Sports Showing Solidarity to the BLM Movement

Since the creation of the Black Lives Matter movement in 2013, it has made its way into major forms of media, especially widely televised sports networks. Famous players such as Colin Kaepernick, the former quarterback for the San Francisco 49ers, have protested in various ways to shed light on this subject, such as kneeling for the national anthem. These peaceful actions faced serious backlash, as Kaepernick and those who followed his example were widely criticized by the mainstream media and were heavily shunned by the National Football League. Nevertheless, it is important to note the positive contributions that sports players have brought through these performances as they have used their large platform to raise awareness about systemic racism in the United States, inspired others to use their voice, all while having not violated any official laws in regards to rules on respect.

What truly empowers these protests is the fact that they include the use of power and influence that sports professionals often have to promote necessary change. Many celebrities and known individuals choose to ignore pressing issues like police brutality, therefore choosing to remain complicit. Players such as Colin Kaepernick, on the other hand, have risked their careers to fight for the rights of black people and other minority groups. Kaepernick himself stated that he was inspired to first kneel in response to a case where a San Francisco policeman shot a black man 20 times and killed him during a confrontation. His motivations were selfless, and his form of protest was entirely peaceful, making his non-violent demonstration garner respect. In the end, Kaepernick lost his position with the San Francisco team and no longer plays football. An NFL executive later admitted that he was outed because his controversial actions made him undesirable to teams that solely sought profits. This illustrates how he faced repercussions and the end of his career not because he wanted to, but because he felt compelled to spread his message. In fact, the National Football League player has been compared to civil rights activist Dr. Martin Luther King Junior, who was also criticized for his peaceful protests back in the 1960s.

Although some Americans argue that racism no longer exists, it is undeniable that discrimination is still rampant in the United States today. Kaepernick led the phenomenon of kneeling in 2016, yet it is 2020 and not much has changed. Black people are still three times more likely to be killed by the police despite being 1.3 times more likely to be unarmed and only making up thirteen percent of the U.S. population. This proves that it is still necessary to educate citizens on racial bias, which is exactly why protests such as kneeling are so vital to help bring about change. They spread awareness by getting media to report their stories and therefore allow those with influence such as athletes to share their message of promoting equality in a peaceful manner. In recent months, the deaths of black people at the hands of police such as George Floyd and Breonna Taylor prove that public shows of support for the black community are necessary as police brutality is still an issue.

“I believe these protests are very helpful in helping people realize how deeply the Black Lives Matter movement affects everyone. It is a great way to silently protest and show support,” sophomore Cristel Cantarero said.

Different instances like that of Kaepernick’s kneeling did also have lasting effects as this small act encourage many others to take a stand. On Thursday, Aug. 28, the New York Mets and Miami Marlins baseball teams walked off the field after holding a 42 second moment of silence and placing a BLM t-shirt on the home plate in as a show of solitude in response to the story of Jacob Blake, a black man who was recently shot seven times by police in Kenosha, Wisconsin. The following day, one hundred employees of the National Basketball Association also held a walkout to protest Blake’s shooting and calling for social reform along with demanding for the officers responsible to be held accountable. Additionally, all NBA players have placed phrases from the Black Lives Matter movement on their jerseys rather than their last name, highlighting their solidarity while playing. This illustrates how normalizing protests among those with wide audiences leads to even more people joining a cause. Without Kaepernick taking the first steps by kneeling, many others may not have had the courage to stand up for what is right as well.

There are those who were upset by Kaepernick’s decision to kneel during the national anthem, claiming that it is disrespectful to the United States flag. However, according to Section Eight of the U.S. Flag Code, kneeling is not disrespectful to the flag as it does not mention what should not be done. On the other hand, this same code does state that “no part of the flag should ever be used as a costume or athletic uniform” like bedding or clothing. Yet somehow these restrictions are hardly ever mentioned when merchandise that breaks these rules is constantly being produced and purchased. There are hardly ever objections to everyday disrespect to the flag because critics of these movements tend to pick and choose when to follow rules, which is not blatantly unfair. Furthermore, the players that chose to kneel solely did it to protest police brutality, and never had any intentions of disrespecting the flag or anything that it stands for. Therefore, invalidating such an argument which attempts to undermine the true meaning of these protests.

Although America is an impressive nation that inspires patriotism and pride among many of its citizens, this does not mean the country is perfect. As a result, peaceful protests that simply attempt to call out its flaws should be welcomed in order to make the U.S. even greater. Kneeling is a prime example of one of these peaceful protests and should be respected for the fact that it is highlighting the flaws in this nation, spreading awareness, and inspiring others to make some good trouble. Hopefully, movements such as these will soon bring true equality to all American citizens.

Sofia Cruz is a sophomore in the International Baccalaureate program and is a second year staff member, returning to CavsConnect this year as News Editor....

Taking A Knee: An Attempt to Unify that Only Divides

In recent months, the Black Lives Matter movement has grown tremendously and the massive movement is the current center of media outlets around the world. Some in support of the message have shown their respect by kneeling to the flag and the national anthem of the United States, like ex San-Francisco 49ers quarterback Colin Kaepernick. Many other sports players have followed his lead and kneeled during their respective games. The point of the kneeling is to fight the systemic racism found within the laws and government of the US, along with any other type of mainstream prejudice that would allow them to understand the flag and the nation does not stand for all. Kneeling for the flag breeds segregation, not unity–it’s disrespectful to the brave men and women of all races who fight for this country and its freedoms and most importantly, it’s an ineffective and counterintuitive way to protest their message.

“The right to choose whether or not you as an athlete should kneel or stand is completely up to the player, although we all have our own opinions, they should be entitled to their own,” sophomore Ryan Mcfadden said.

Standing up for what you believe in is always a respectable measure, especially when putting things on the line to convey the message. The question is, however, should players stand or kneel for our national anthem? The reality is kneeling for the flag does not create unity, but rather divide. Colin Kaepernick, the person who popularized the protest, for example, kneeled to protest police brutality while simultaneously wearing socks with pigs dressed in police uniform. His message reasons we should all be equal but treats and categorizes people into groups. This is evident in his wearing of the ill-messaged socks which almost led to the boycott of the Santa Clara Police Union. This created a rift between those all of those who want equality.

Kneeling also leads to the disrespecting of all who are in or have served in the armed forces. These honorable men and women have fought for the rights of all in this country and have died such a pursuit. Drew Brees, New Orleans Saints quarterback, supported the message but not the delivery, saying “It’s an oxymoron that you’re sitting down, disrespecting the flag that has given you the freedom to speak out.” The actuality is that disrespecting the flag by kneeling is a undermining move to our military, our history and even people like Martin Luther King Junior who fought for civil rights in this nation and succeeded the beginning of taking down racist policies and mainstream prejudice in society.

“I feel that players have very right to represent however they feel, whether or not it is the popular opinion because at the end of the day, they are all human and they have their own reasons for their actions,” junior Alejandro Delgado said.

Lastly, the movement of sports players kneeling to the flag is mainly performative and does not enact the justice they preach. Johnathan Isaac, a basketball player for the Orland0 Magic, explains how he views the movement saying “I do believe that Black lives matter, I just felt like it was a decision I had to make, and I didn’t feel like putting that shirt on and kneeling went hand in hand with supporting Black lives.” The United States is not a perfect union or nation, but its laws and government create a representation of society that demonstrates a lack of racism and bias against minorities in comparison to other nations. Laws are constantly being passed regarding Black lives, but the kneeling itself is mainly performative and does not prove any benefit but disrespect to the flag. The truth is, the political message of the protest does not do anything to actually benefit the Black community.

Some people believe that kneeling to the flag bring justice and awareness to the systemic racism found in this nation and that it addresses police brutality and other oppression of minorities. However, this does not do much for the black community or bring any type of real benefit. It’s only ability is to create divide in a time when we should all stand together.

All in all, the kneeling to the flag by sports players and teams is an ineffective and counterproductive way to promote any cause or change in this country. It’s disrespectful to many and causes divide among our population in an unnecessary way. People need to find better ways like the NBA did to support and rise up the minority communities in the US that would actually be beneficial. The leaders need to realize this and elevate these types of promotions in order to bring about real positive change. We should all ‘stand’ for change.