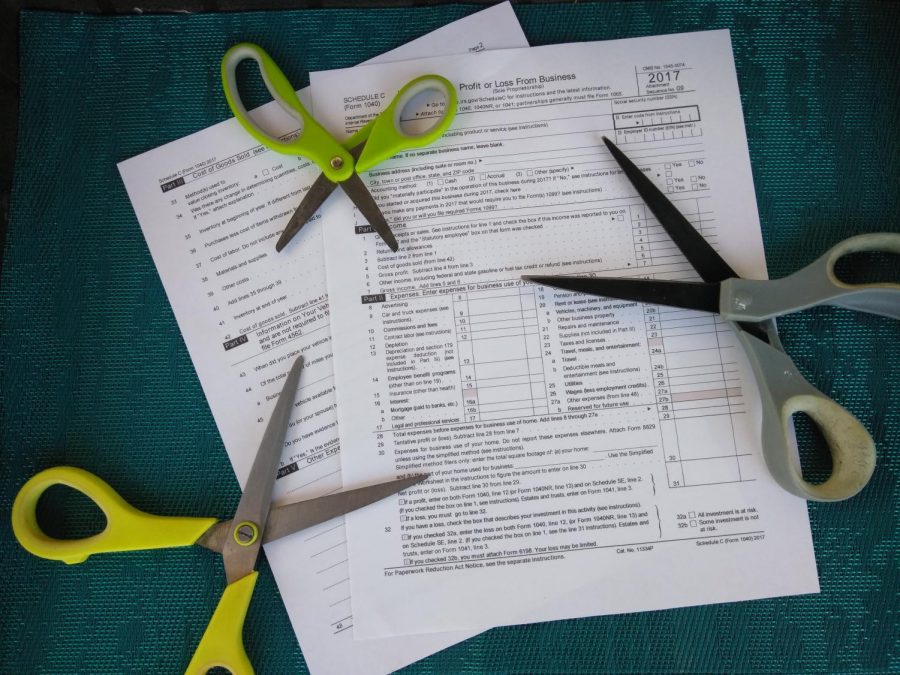 The Cut Cut Cut Act is a new tax reform that Congress wants to pass to promote corporations and small businessmen.

Does it Make the Cut, Cut, Cut?

With many of the Republicans in this country being wealthy, there is no doubt that our new president, Donald J. Trump, would want to accommodate his fellow party members. Not only is the majority of Congress made up of Republicans, but it will probably remain the same way since barely any changes have occurred over the years. To further represent the Republican party, Congress wants to pass a new tax reform where the Republican party plans on delivering permanent tax cuts for corporations. This is meant to promote their deal of a more corporate and business-centered America. However, people are not only protesting the absurd name of the reform, The Cut Cut Cut Act, but also how it will be implicated in our economy. What our government is not talking about is how it is unfair to the everyday-citizen that does not own a multi-million corporation, or how the tax cuts will increase our deficits and national debt by about 1.4 trillion dollars. Not only that, but a new tax reform would add to the unsustainable long-term fiscal situation.

While the targeted market for this tax reform may be branded as large, it can not be further from the truth. In fact, many lobbyists are rejecting to support the act, alongside with many Republican congressmen that are also not cheering for it. Although the tax reform is branded as large, it only benefits the wealthy business owners. An example would be the owners of Walmart, a multi-billion dollar company, or Mark Zuckerberg, the creator of Facebook. According to the National Federation of Independent Business (NFIB), the bill excludes small business owners from any real benefit of tax cuts. If business owners are not receiving any gain from the reform, then let alone will regular citizens, who work everyday jobs, benefit from the act; therefore, the bill is limited to only help extremely wealthy entrepreneurs.

Additionally, instead of helping out, the bill will increase our national debt, add to a more unsustainable long-term fiscal situation and public debt. As of 2017, America’s national deficit tops the nineteen trillion dollars and the fiscal debt reaches to 440 billion dollars; moreover, our government adds to the debt whenever it spends more than it collects in tax revenue. Trump states, “we want tax reform that is pro-growth, pro-jobs, pro-worker, pro-family and, yes, tax reform that is pro-American.” However, the tax reform will not improve the lower classes since neither small businessmen nor normal taxpayers earn anything from it. To conclude, the bill will increase our national deficit by 1.4 trillion dollars in the next decade; in fact, experts say that the economy will not change from the proposed cuts in the reform.

“Well, the name is too silly for something as important as a tax cut. As for the tax cut itself, it benefits the rich people more than it does us immigrants with very low-income households. The cut helps the wealthy who already have money, while the people with low and average incomes may not be as lucky. I honestly think that the Trump administration is doing this just for rich people and billionaires like him,” freshman Alina Pajón said.

However, the bill does support the rich business owners of this country, which are the true foundation of Corporate America. The bill is also meant to help the middle class by lowering tax rates, increasing standard deductions and giving a $300 tax credit for each adult in a household. There is also the reduction and eventual repeal of the estate tax, which yet again benefits the rich meaning that these all depend on deductibles, exemptions and credits. Thus, everyone should receive a fair outcome according to their own household income. Additionally, press secretary, Sarah Huckabee Sanders, states that the bill “includes massive tax cuts like the president is proposing.”

Nonetheless, the share of the bill’s tax cuts that rich citizens receive is much larger than their share of income and the share of federal taxes paid by them by almost two-thirds more; in other words, the middle class is cheated again by the wealthy. Other than that, there is the 300 dollar tax credit for every adult. This amount will sharply decrease over the years if the reform is approved by the majority of Congress, meaning that the act is not beneficial at all.

“I think people have lost all morals for political favors. The rich stick together to benefit from these associations. These people don’t need that money, whereas a mother/father up north is terrified about winter coming because they can’t afford heat or buying proper attire. Not to mention that, under Trump, the lower income families are disregarded more as time passes by. This bill demonstrates how the world is slowly and continuously losing its humanity little by little,” senior Isabella Martinez said.

Apart from the very ostracized name, the criticism does not stop there. The bill states that “a typical middle-income family of four, earning $59,000 [the median household income], will receive a $1,182 tax cut.” However, that is only 1,182 dollars. On the contrary, a three million dollar firm in accounting would receive 240,000 dollars. Considering all the numbers and big values in our unfortunately sinking economy, comparing those two values would be ridiculous. While it does benefit by a much needed but minuscule amount of 1,182 dollars, what is that next to the thousands that big businesses would win exponentially? In fact, the price of an iPhone X is $1,182 with store tax. We are in an economy where it is growing increasingly difficult to become wealthy; this can be due to our social consumerism, economic changes, discrimination and pure luck. For those who were not born into wealthy families, it becomes more difficult to get good economic leverage. The new tax reform does not help individuals with a small amount of money to invest in the first place, which is the opposite of what the new bill promises.

“I think it will be a change that will work well for everybody and not just the rich. It will hopefully help the poor and not drain the rich and make taxes fair,” freshman Micaela Torres said.

Overall, a lot of politicians are saying that this new tax reform is not a good idea. As stated before, the only people that will benefit from it is the wealthy of our country, not the everyday Joe. While we all know that Congress is filled with rich businessmen, that does not mean they get to delude the public and mislead us with the Cut Cut Cut Act’s purpose. The thought of this reform actually improving our everyday lives is nothing but a delusion. We can all criticize the name of the reform for being childish, as many others have. Nonetheless, calling the name of the act simplistic will not overshadow the fact that the act will not apply to the small business owners or the everyday working citizen. Instead, all it will do is further expand the gap between the rich and the poor and increase our national debt, which is already the highest in the world.