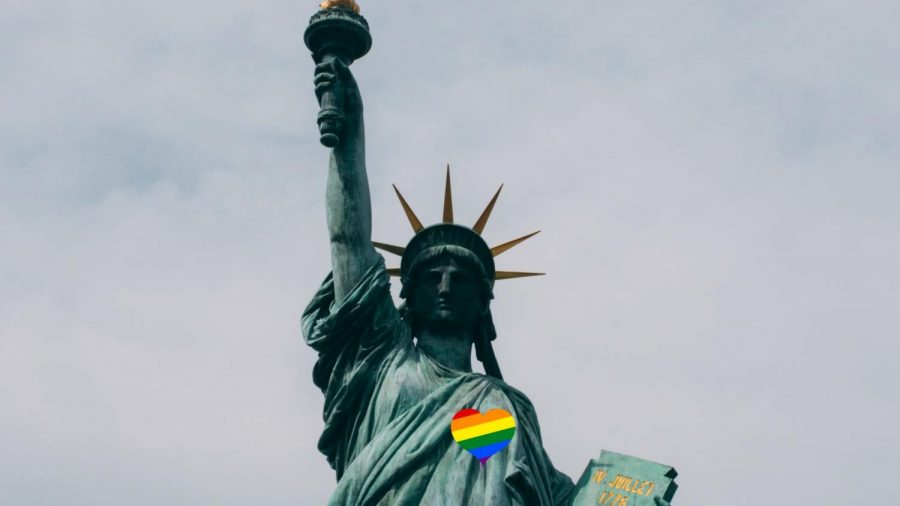 The LGTBQ+ community continues to strive for equality as the United States makes a decision that sets the progress they have made back.

Till Death Do Us Part

On Oct. 3, 2017, the world was in shock when the United States voted against the United Nations on a topic that had human rights activists enraged.  The U.S had voted against the condemning of the death penalty towards the LGBTQ+ community. This led the United States to join 13 other countries, who allow this violation of human rights. A vote against the banning of a death penalty towards LGBTQ+ community is not uncommon for countries, e.g., Iraq, the United Arab Emirates, Qatar and Saudi Arabia, where same-sex relations are frowned upon. America made the wrong decision because it depicts this country as hypocritical when the rights of their people, especially their right to love, are being denied.

The United States voting “no” sets America back from all the progress that has been made to present the minority group with their basic rights.  On June 26, 2015, same-sex marriage became legal in all 50 states making America a place where LGBT members feel safe and no longer feel the need to hide themselves or their love within the shadows. However, before such progress was made, members of the community were sent to conversion camps where they will get “fixed” because their sexual orientation was considered a sickness and not a part of who they are. This community has faced enough oppression throughout the years, and this vote can only make matters worse. The actions America took may result in history repeating itself, which is hinted by Adolf Hitler’s actions to diminish LGBTQ+ rights and remove gays and lesbians from existence. America is a country that focuses on “liberty for all,” yet the vote against the ban depicts how human rights are slowly taken away from the citizens of this country. Freedom to the people has become an expression that is spoken, but not executed in America. Many are clearly furious about what this country has come to, and this vote only fuels their anger. It appears that the United States has progressively dug its own grave, as more rights are being denied to those that make America culturally diverse. The country’s previous decision to ban transgender troops from the military and no longer protect gay workers from discrimination reveals that America is intolerant of its diverse population. The fate of minorities is uncertain, which is why dialogue needs to be encouraged in order to protect their rights.

“I think it’s just a reflection of the fact that even in 2017 we are not at a place where we can say the LGBT+ community is at a standstill. It’s a constant fight because there are people who still condemn the existence of people because of their sexual orientation or gender identity. The idea of the death penalty being a ‘consequence’ for LGBT+ people is so ridiculously outdated, not that it ever should have been in place, but unfortunately, this is the world we live in. And in a country as self-righteous as America it is becoming more clear everyday what position this country takes against the LGBT+ community,” junior Natalie Brenes said.

Although the vote was humanely wrong, some seem to think otherwise. Due to the controversy surrounding this vote, a United States representative tried to clear up the confusion and false reporting since the vote was cast.  It was said in the conference that the only reason the United States voted against is because they never go against the death penalty since it’s a cruel punishment that is enforced in America. Furthermore, there are countries that shun those who do not conform to their culture’s set ideals, in this case it’s being in a relationship with a person of the same sex. Such countries believe that same-sex relationships are a sin, making their case for using the death penalty as a form of punishment stronger.

Fortunately enough, the votes were 27 out of 47 members in favor of banning the punishment, meaning that despite America’s opinion, the death penalty against the LGBTQ+ community would be prohibited. America’s love for the death penalty is wrong and inhumane, especially in a case where being with someone of the same sex could get you killed. The U.S voting “no” to the banning of the death penalty towards LGBTQ+ members is terrible and a violation of basic rights that are protected under the Bill of Rights. When the United States voted for the legalization of same-sex marriage in all 50 states, the country came together and celebrated. Now that the United States voted to continue the death penalty against LGBTQ+ people, it has destroyed and contradicted what many people fought for. If the church and state are supposed to be separated, then why is the American government mixing in their beliefs when creating new laws?  Countries should not be involved in a person’s personal matters or intervene with a person’s beliefs and way of life. Sexuality is not a joke or phase, and it’s definitely something that is not up for discussion. Such countries that are against same-sex marriages are not forced to agree with people’s sexual-orientation because they are entitled to their own opinions and beliefs. However, that doesn’t give them the authority to treat a group of humans like animals and deny them their rights. People should not be penalized, especially in a heinous way like this, for loving who they want to love. In fact, the LGBTQ+ community does not do any harm, instead it enforces acceptance for those who struggle to find it.

“I think the United States should not involve themselves in any individual’s personal and private matters. Just like they should not get involved in a woman’s choices over her own body. The U.S separates the church and beliefs from the state, meaning that citizens should not have to abide by or suffer because of the personal beliefs of another person,” senior Isabella Hernandez said.

The United States’ vote against the condemning of the death penalty towards people of the LGBTQ+ community depicts the lack of basic humanity this country has. The people from these countries that employ the death penalty are being denied their right to love, be loved, and be themselves; why should America do the same cruel thing? This is a country that prides itself in its people and boasts of the ‘liberty’ they give, yet America does not follow through with their word. We must build forward a better future, learn from the mistakes that have been made in the past and move towards a greater nation where acceptance is abundant and love conquers all.