On Sept. 28, the Coral Gables community was shocked to hear that the former first lady, Michelle Obama, would be speaking in our very own backyard. Students and adults alike scrambled to pick up free tickets at several distributions sites in order to take part in the event held at the University of Miami Watsco Center and sponsored by the We All Vote team comprised of individuals who want to emphasize the importance of registering for voting.

“I am turning eighteen this year and being a citizen of this society I am affected by the decisions made by my representatives. I cannot believe that it is now my turn to choose a candidate that I fully believe in, it is now a thing of the past that I sit by quietly because I am not of age to make a difference,” senior Julianna Delgado said.

Michelle Obama spoke with no set political party at heart. She was not encouraging those in the audience to vote for what she believes is the best party but to get involved in their local communities as all levels of government impact citizens’ everyday lives. 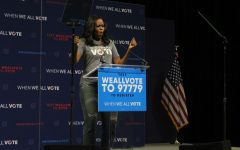 I am not here to tell anyone who to vote for; I am not stomping on any one candidate, I am here because it feels like we are locked in a dangerous cycle when it comes to voting in this country. ”

Mrs. Obama, along with the ‘We All Vote’ team has been traveling all over the country reaching out to citizens at rallies, meetings and signing them up to vote as many people do not know how to register. Thanks to the team customizing a simple way to do it, now anyone can be registered by texting ‘WEALLVOTE’ to the number (97779). Through this text message, a responder will contact and help you through the process of registration.

“I could not believe she was really there, speaking to us, for a second my ears rang from all the applause and yelling but all I could focus on was the fact that she was standing right there smiling widely when she came out of the backdrop,” junior Alexa Riedmiller said.

During Mrs. Obama’s speech, she made sure to reach the audience in a personal way that really makes you want to get up and register because that is the most important step of all. After you register, it is your duty to go to the polls and make your voice count. On a more personal note, she recalled a time where her father, a man of age, would get up every voting term and would do his part and voted according to his beliefs. She also recounted a time when she went with him for the first time and how awe-inspiring it all was.

Many were surprised and delighted in her efforts to reach the American people and preserve our democracy via television channels,  social media outlets, and live events through which she aimed to emphasize the sacred value of ones vote. 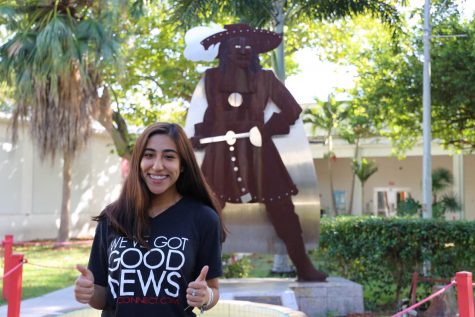 Jesse Zambrano is a senior in the International Baccalaureate (IB) program. When she arrived to the US, it was clear to Zambrano how important it was to...