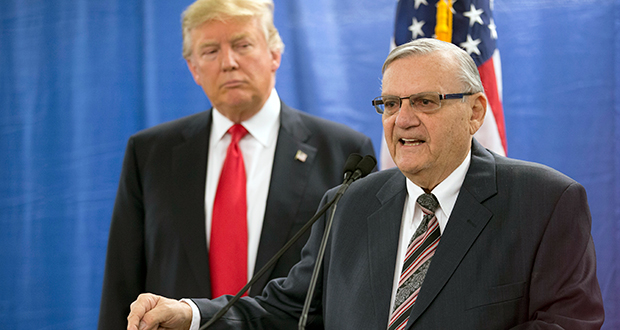 On Friday, Aug. 25, Donald Trump issued his first pardon as president on behalf of Sheriff Joseph Arpaio. Sheriff Arpaio, a law enforcer in the state of Arizona, was pardoned for defying a federal court order. He is known for his stances on illegal immigration and his primary role in an investigation on the validity of Barack Obama’s birth certificate. He has been accused of abuse of power, misuse of funding, failure to research sexual crimes, unlawful enforcement of illegal immigration, election law violations and racial profiling (especially targeting Hispanics). Apart from having been accused of several different types of police misconduct, he has been the subject of many civil rights lawsuits, including one brought by the U.S. Department of Justice, costing his office over 140 million dollars.

The criminal case for which he is being pardoned involves a lawsuit filed by a Mexican man in Maricopa County. After pulling the man over for a traffic stop, Sheriff Arpaio wrongfully held him for nine hours, despite him having a valid tourists’ visa. The man then sued him, claiming he experienced racial profiling from the deputies. Many others got involved, making the case into a class action lawsuit which now involves all Latino motorists in the county. Four years after the original lawsuit was filed, a judge in Phoenix ordered the sheriff to stop detaining individuals not suspected of a state or federal crime, declaring that “… states do not have the inherent authority to enforce the civil provisions of federal immigration law”.

“I feel like Donald Trump is abusing his power, giving Joe Arpaio a pardon when this man has clearly discriminated against multiple communities of minorities and also abuses power as a sheriff. I feel this is a great injustice,” said freshman Joshua Silva.

Since then, two federal judges have found Sheriff Arpaio guilty of not abiding by the injunction and still participating in police misconduct. Arpaio has even openly stated that he does not plan on abiding by the federal court order. U.S. District Judge G. Murray Snow stated that the sheriff and his chief deputy “have a history of obfuscation and subversion of this Court’s orders that is as old as this case and did not stop after they themselves became the subjects of civil contempt”.

“I support Donald Trump one-hundred percent. Joe Arpaio has been serving our country for a long time – over fifty years. As an American, I support Donald Trump’s decision, and as a dedicated Republican, I stand behind his choice. As the majority of the media is run by the Democratic Party, there is a lot of tainted information about both these men, often untruthful,” said sophomore Dennis Perez.

In 2015, Snow found Arpaio in civil contempt of court, but after realizing the sheriff had no intention of complying with the order, he referred the case to U.S. District Judge Susan R. Bolton in order to find him in criminal contempt of court, a charge that carries a possible six months of jail time. Judge Bolton found Arpaio guilty and set his sentencing for Oct. 5, 2017, but President Trump pardoned the sheriff before he could be sentenced. In the White House’s official statement, they claimed that Arpaio “continued his life’s work of protecting the public from scourges of crime and illegal immigration”. This statement was considered to be very controversial, with many commentators analyzing the situations and giving their opinions on the issue. Despite the backlash, President Trump stands by his decision, as seen in his tweet: “I am pleased to inform you that I have just granted a full pardon to 85-year-old American patriot Joe Arpaio. He kept Arizona safe!”.

Click here to see MSNBC’s news report on the subject.