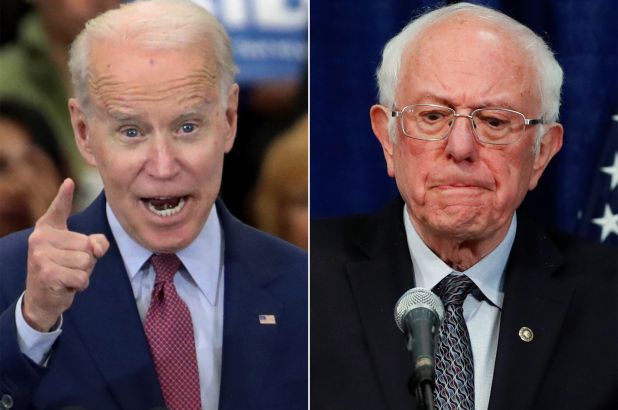 The Democratic race prompts divide in the Democratic party as both candidates share a different agenda for 2020.

Recently, several Democratic candidates have dropped out of the race, leaving Joe Biden and Bernie Sanders as the only contenders for their parties’ nomination. The Super Tuesday primaries proved that Biden has more support than Bernie and is likely to stay the same.

Each state has its own set number of delegates and every four years, these delegates vote in elections called primaries where the general purpose is to choose a candidate to represent a specific party. The primaries are held from February to June, leading up to the presidential elections through caucuses, or meetings at which local members of a political party register their preference among candidates. Heading into the March 17th primary, Sanders and Biden are the only Democratic candidates left to vote for as top competitors Elizabeth Warren, Mike Bloomberg, Amy Klobuchar and Pete Buttigeig have withdrawn from the race. Primaries calculated a total of 1,991 of the 3,979 delegates are needed to secure the nomination on the first ballot at the Democratic National Convention. Currently, President Donald Trump leads the Republican party in the primaries with 1,104 pledged delegates with the likelihood of a landslide vote being improbable. Biden has surpassed Sanders in the race with 867 delegates, 156 more than Sanders.

I) Where do the candidates stand?

Sanders promises modifications to the U.S. government, like free healthcare, replacing private insurance with a government plan, and completely wiping out income inequality. He is rather open with his beliefs, being a president of change that entices voters who want to see new policies, something which may turn off other more conservative voters who believe the stable economy right now can be undone by Sanders’s changes. These voters turn to Biden who cares to continue policies brought upon the “Barack Obama” era and is committed to less change which is a reason older voters care for his calmer campaign.

“Joe Biden will win the democratic nomination because the primaries are showing that…plus I support him as I’m personally more moderate. Joe is obviously more qualified as he’s previously served in the administration for eight years under Obama, also I don’t think Bernie could ever win over Trump; he would divide the party way too much as moderates and the elderly vote would not support him. I think so far, as evidence from Super Tuesday, that we need a strong unifying face of the party, rather than someone who will disunite it,” said sophomore Benjamin Pla.

The Washington Post states that Sanders has won a majority vote for ages below 30 while Biden reels in older voters, 50 and above, who believe he is the best chance to beat Trump. FiveThirtyEight, an informational site that focuses on opinion poll analysis, politics and economics, created a poll on the subject. Respondents of the poll estimated that Biden has a 67% chance of defeating Trump in the general election, compared to Sanders’s 54% chance. Sanders has a legion of loyal followers whose motto is “Bernie or Bust”. This group is made up of his younger voters and it is unlikely this would make much of a difference to him in the polls because youths are also historically known to vote less. This was tested by Duke University who found only half of 18 to 29-year-olds cast ballots, with 43% of that age group voting in the 2016 presidential elections.

Super Tuesday is the largest primary election day in March when the greatest number of U.S. states holds primary elections and caucuses, usually 14 states in total. The results on Super Tuesday are a strong indicator of the eventual nominee of each political party. It is unclear where the votes for people like Warren and Bloomberg will go to, but it is known whoever they endorse would gain more support. Warren has yet to endorse anyone but Bloomberg and Buttigieg side with Biden, both being highly ranked officials that are sure to give Biden more press. Lesser-known candidates like Bill de Blasio and Marianne Williamson endorsed Sanders. Sanders’s lack of popularity will likely cost him votes in the government. Latino’s backed up his win in Nevada and California, although he did lose Texas. Sanders also lost Maine, Oklahoma, and Minnesota because he abandoned his previous immigration-restrictionist tendencies and dropped his skepticism of gun control. Many of Florida’s Hispanic Democrats are noted to dislike Bernie’s views and are suspected to support Biden in the race which gives him a big advantage in the polls as Florida is considered a voting giant.

“Even though I support Bernie Sanders through and through, I think Joe Biden will win the Democratic nomination because of the sudden swarm of endorsements and changes in the dynamics of the race. His pure name recognition and ability to unite different figures of the party establishment have given him an advantage on the question of electability and momentum. I see Joe Biden as a massive improvement over Donald Trump so I would still vote for him despite possibly struggling to find the energy to publicly share his cause with others” said senior Robin Garrido.

In future terms, Sanders is likely to win Idaho, North Dakota and Washington based on his publicity and high status in those states but will likely be blown out in Missouri, Mississippi and Arizona due to his more radical policies, these facts also fall in line with how voters aligned themselves in previous years. This would dramatically decrease his delegate lead, not being able to catch up to Biden’s votes in Florida and Georgia. Mathematically, Sanders will not beat Biden in the polls based on his lack of support in most U.S. voting giants Florida, California, New York, Virginia and Texas. This may devastate his supporters, but one thing both parties share as an ultimate goal is to defeat President Donald Trump for the November presidential election. Biden himself states both sides need to work together and unite despite differences. He welcomed supporters of his former rivals, addressing a small crowd of supporters in Philadelphia after a planned rally in Cleveland, Ohio was canceled over coronavirus, he was quoted saying “…if you’re willing, join us. We need you, we want you, there is a place in our campaign for each of you…And I want to thank Bernie Sanders and his supporters for their tireless energy and passion…We share a common goal, and together, we’ll defeat Donald Trump. We’ll defeat him together.”

The division between Bernie and Biden supporters may be a factor as to the fear behind the Democratic Party. Sanders supporters will have to side with Biden in order to defeat Trump and the intense desire may be enough to jump-start democratic voter turnout during the polls. This would be difficult as voters are most likely to vote for the same president twice when the economy is high, this was seen in the 1920’s when Ronald Reagan was re-elected despite more people developing a negative opinion on him. Democrats need to come up with a way to improve the economy (to gain the favor of the working class), something of which Trump has already been able to do. Under his presidency the U.S. has seen gross domestic product growth go from 2% to above 3% with more than seven million new jobs being created and unemployment rates falling from 4.8 percent to 3.5 percent, with African-American and Hispanic unemployment at historic lows.

David Catron, a healthcare consultant and frequent contributor to The American Spectator, explains certain factors that guarantee the loss of the Democratic Party in this year’s election. He capitalizes on the fact that the Democratic Party wasted it’s time trying to oust Trump for getting into presidency by Russian intervention in a two-year investigation by Robert Mueller where no conclusive evidence was found. This situation stained the reputation of the party who should have focused on gaining more votes in the states. Catron also says that the party being unable to choose a leader would be their downfall, as Trump and his party are more powerful than a separated group stuck between two people, and by stating “…this ideological conflict within the opposition party will result in the nomination of a weak compromise candidate to face a vindicated and politically stronger incumbent president awash in cash and supported by highly motivated voters.”

The future of the presidential elections is reflected by these primary elections and until democrats can overcome the factors that are keeping them from defeating Trump, which are picking between Biden and Sanders, supporting and gaining more democratic followers in the states and having a stable economic plan to raise the American economy, they are predicted to lose in 2020. Most likely the Democrats are choosing Biden, as per results from Super Tuesday and the other primary elections. Biden would have to work to unite Sanders supporters with him in order to be able to stand a chance in the elections. There would also have to be an increase in youth voting, as the younger generations tend to side with the liberal/moderate democratic party. There are a lot of factors that need to be perfect in order for the Democratic Party to win the election. The opportunity will only arise if the party joins together, despite the differences between Sanders and Biden. If not the United States will seemingly witness Trump winning re-election.