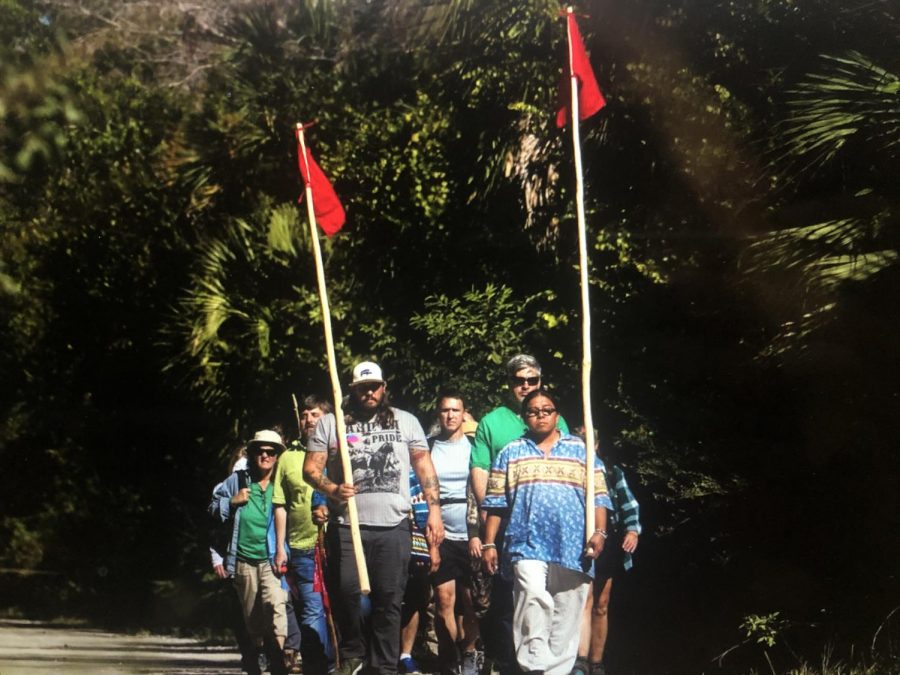 Activists grouped together, in a prayer walk, as a from of protest to alleged confistaction of land which is home to Micosuke tribe.

Following the Florida government's decision to go forth with a Everglades restoration project, landowners in the area, including the Micosukee Tribe, protest in fear of losing their quality of life.

On December 7, the Miccosukee Tribe of Indians of Florida initiated a prayer walk in Ochopee to shine a light on the possible complications faced by owners of private land in Big Cypress National Preserve as a result of restoration plans put into action by the Western Everglade Restoration Project (WESP). In recent years, restoring the Everglades has become increasingly significant due to the lack of fresh water flowing into the area, jeopardizing drinking water for a third of Florida’s population. The Florida government has made continual efforts to resolve this situation, however, WESP is planned to send 18 to 24 inches of water into land owned by the Miccosukee Tribe and other private landowners in the area. This fueled the protest earlier this month led by Betty Osceola, an Everglades conservationist, member of the Miccosukee Tribe and clean water advocate, alongside other members of the tribe, residents of the Everglades and environmental campaigners.

Earlier this year, the U.S. Interior Department, a federal executive department of the U.S. government that handles the country’s natural resources and tribal communities, allowed the Army Corps of Engineers, a federal agency under the Department of Defense dealing with dams, canals and flood protection in the United States, to seize private land in the Big Cypress National Preserve to allow for Everglades restoration plans to continue. The Miccosukee Tribe, whose land is within the Big Cypress Indian Reservation and others who own property within the Everglades were not allowed a say in the potential loss of their land.

“In this situation, the positives outweigh the negatives. Everglades restoration is an urgent matter that calls for drastic measures,” sophomore Emilio Quaranta said. “WESP will finally improve water distribution, which is the most important thing to focus on.”

According to the South Florida Water Management District, WESP was created as an effort aiming to improve the quantity, quality, timing and distribution of water that is essential to restore and reconnect the Everglades ecosystem. WESP is part of the Comprehensive Everglades Restoration Plan (CERP), a proposition to protect and preserve the water resources of central and southern Florida, including the Everglades. At the beginning of November, Governor Ron DeSantis announced that for the first time in history, water would be pumped into C-44 Stormwater Treatment Area in Jacksonville, as a jump-start into CERP.

Although seemingly harmless, the government’s plan to restore the Everglades could be problematic for 248 privately-owned properties, including those owned by the Miccosukee Tribe. The amount and condition of the water that flows through the Everglades is crucial to sustain the quality of life of those living and conducting business within these properties, but those who own properties in the Everglades detect that this is being disregarded to implement WERP.

“I think it is important to consider all aspects of this restoration plan and understand that many people are going to be harmed in the process, including sacred Native American tribes,” sophomore Mya Sepulveda said. “There should be a new plan implemented that does not involve destroying the lives of hundreds.”

The Miccosukee tribe and other members of the community are advocating for a more humane approach to Everglade restoration projects as opposed to the methods used by the Corps and other government groups that use technology to conclude what is needed to restore the Everglades. Because of their heritage and first-hand experience, the tribe asserts that they should be allowed to contribute to the conversation. Those who took part in the prayer walk urged for an approach that does not disregard people’s lives or threaten private landowners.