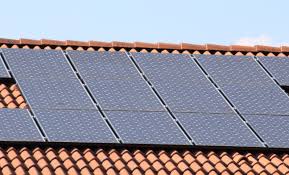 Coral Gables dissaproves of street facing solar panels because it hurts the image of the city.

Coral Gables dissaproves of street facing solar panels because it hurts the image of the city.

Coral Gables is surprisingly turning away from solar energy

Coral Gables, coined the City Beautiful, is known for its actions taken to make the city green and environmentally friendly as possible. However, leaders have decided that some of the most effective solar panels clash too much with the aesthetic of the city when they refused permits to a resident for street facing solar panels in late 2018. Acquiring these permits is still difficult and discourages citizens from greener alternatives.

In recent years, the city has started a multitude of projects to benefit the environment, such as banning plastic bags in May of 2017 and instead making grocery shoppers bring their own bags, buy cloth bags or use paper bags. Plastic straws have also been banned as of this year and there is a push for plastic cups to be added to the prohibition. Coral Gables has stocked up on electric scooters to lessen its carbon footprint and has free electric car charging stations scattered around the city to encourage their use. The city has even invested in finding more sustainable building materials for its buildings.

With all the steps being taken to ensure a healthier planet, it is shocking that the city would turn its back to certain variations of solar panels that people would have installed in their homes. A city so dedicated to going green should be glad the community is showing an interest in more environmentally friendly ways to get their energy rather than protecting their pristine look. If the planet is reaching a crisis, people must yield to environmentally sound building projects.

According to the Solar Energy Industries Association, installation fees of solar energy has dropped by almost 70% in the last decade, making solar more accessible to middle class homes. However, without the proper solar permits those who wish to install solar panels face heavy fines and the possibility of the panels being taken down by the city.

By making solar panel permits difficult to attain, the city is going against the Florida Solar Rights Act which forbids any person or group to prohibit the installation of solar panels on any Florida building. Making permits more restrictive just dissuades people from searching for renewable energy devices, which almost goes against many things the city has worked so hard to reach.

“Coral Gables is making it more problematic for those who want to do good for the planet, they should be proud of an ecologically concerned community interested in lending a hand in environmental well being,” sophomore Gloria Reyes said.

Because Coral Gables has been an environmental pioneer in recent years, their decision to make it more difficult to install solar panels is surrounded by hypocrisy. One house using solar panels is bettering the state of the Earth, however small it may seem to the city. It would be expected that they would be applauding the consciousness of their residents being interested in another way to benefit a greener Gables.