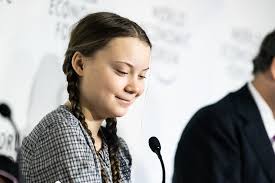 The face of modern activism

Swedish Environmental activist Greta Thunberg took the main stage at the UN with her impassioned speech, but are her words truly making any impact?

At the New York Climate Action Summit, 16 year old Greta Thunberg delivered a powerful message to world leaders, saying “how dare you” to those who expect young people to be the hope for the future of the climate, rather than lifting a finger to do anything themselves. She demanded change and immediate action by the world’s leaders, or else there would be little chance of being able to stop the irreversible effects of climate change that could  negatively impact the earth forever.

In the wake of Thunberg’s speech, climate strikes have been taking place during school hours, with some students skipping classes as a show of the need for immediate action while other schools showed support by sponsoring or allowing these activities. Support for Green parties in several different countries has also significantly increased, as well as new political movements to end greenhouse gas emissions within the next several years. Thunberg, in an interview with Canada’s prime minister Justin Trudeau, stated that Trudeau was not doing enough to fight climate change, actually causing a decrease in support for him. Thunberg’s widespread influence has even been dubbed, “The Greta effect”.

However, there are many who believe that Thunberg is mistaken in her cause and that she cannot make any real difference in saving the environment. A portion of these detractors think that Thunberg is a figurehead controlled by adults who want to push a certain political agenda. They say that she is simply too young to understand the full scope of what climate change and political change actually mean and cost. There are of course the large numbers of people who either dismiss climate change and global warming as a myth, or those who disregard it because of more interest and concern in the global economy, which certain aspects of the climate change movement could heavily affect.

“She has good intentions, but as with many things, these problems can’t be solved on their own. I do think both sides are right, since we still don’t know if we are truly a large figure in the cause of climate change, since, after heat increase, ice ages have historically happened. Still politicians are not always honest and should solve problems, not put them on others, especially this next generation who has no part in this,” freshman Andrew Lee said.

Despite her extreme influence and empowered voice, Thunberg was often held back by multiple serious health issues. She was diagnosed with Asperger’s syndrome, selective mutism and obsessive compulsive disorder (OCD) while at a young age. Combined, those conditions essentially mean that she only speaks during certain moments, making interactions and communication limited and difficult. However, Thunberg claims that her selective mutism means that, “I only speak when I think it’s necessary. Now is one of those moments.” Overall, she has overcome and used her illness to speak strongly about climate change and political reform.

When she was eight years old, Thunberg learned for the first time of climate change, and from the start could not believe why so little was being done to stop it. Because of her immensely powerful message and drive, she has seemingly been able to begin actual change and reform that could potentially lead to real protection of the earth’s environment. Overcoming health problems and fierce opposition and criticism, Thunberg has become one of the most influential and memorable voices of this generation.