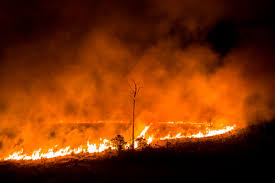 Man-made fires are damaging the Amazon Rainforest, but also affecting the enviornemnt on a global scale

Amazon Rainforest: Why is it burning?

The world’s largest, most diverse rainforest is being destroyed through a process called “queimada,” which can eventually intensify climate change

Home to thousands of species and indigenous tribes, the Amazon Rainforest is burning at a record rate. The rainforest covers many South American countries, including the northwest region of Brazil, Ecuador, Venezuela, Colombia, Peru and Bolivia. Brazil’s largest city, São Paulo, felt the effect of the burning on the afternoon of Monday, August 19. Large black clouds obscured the city due to the smoke and ash that came from the fire. According to Brazil’s space research center, Brazil had experienced around 73,000 fires this year, the majority of them taking place in the rainforest. These fires are purposely caused by people who work in agriculture. Cattle ranchers and farmers burn the land each year in order to prepare for cattle ranching, crops and other forms of animal agriculture. This time of year is called “Season of the Queimada” which in Portuguese means “Season of the Burned.”

The Amazon Rainforest is often referred to as the earth’s “lungs,” since the forests and the plants release oxygen into the atmosphere and store carbon dioxide. Serving as Brazil’s 38th president, Jair Bolsonaro has been in office since January 1st, 2019. Under Bolsonaro’s presidency, the Brazilian Institute of Environment and Renewable Natural Resources (IBAMA) has faced severe budget cuts which, some say did not allow for this government ministry to continue its job. The majority of carbon dioxide emission is caused by humans as a result of the burning of fossil fuels. Due to this phenomenon, without the presence of these rainforests, the greenhouse gas effect would likely worsen in the upcoming years. Trees and plants play a vital role in removing carbon dioxide from the Earth’s atmosphere and use it to photosynthesize.

According to WLRN, Nicholas Vazquez, the Miami coordinator for Extinction Rebellion states that since the Amazon Rainforest sequesters a quarter of global carbon emissions,  a threat to the future of  South Florida is possible, due to the rising of sea levels. Based in Miami, the CLEO Institute is a non-profit, non-partisan organization focusing on developing climate literacy, knowledge and spreading advocacy among communities. “The Amazon rainforest fires have amplified the already urgent climate crisis, and massive, immediate global response is needed,” Caroline Lewis, founder of the CLEO Institute said.

Some ways people can help, even from afar, is to support renewable energy sources, reducing beef consumption and supporting grassroot organization that work closely to inform the public about certain environmental issues and advocate on related topics. These occurrences have recently sparked controversy and debate among users on social media sites like Twitter and Instagram, as well as spread awareness of this Brazil-native, species-diverse rainforest and the deforestation it experiences each year.