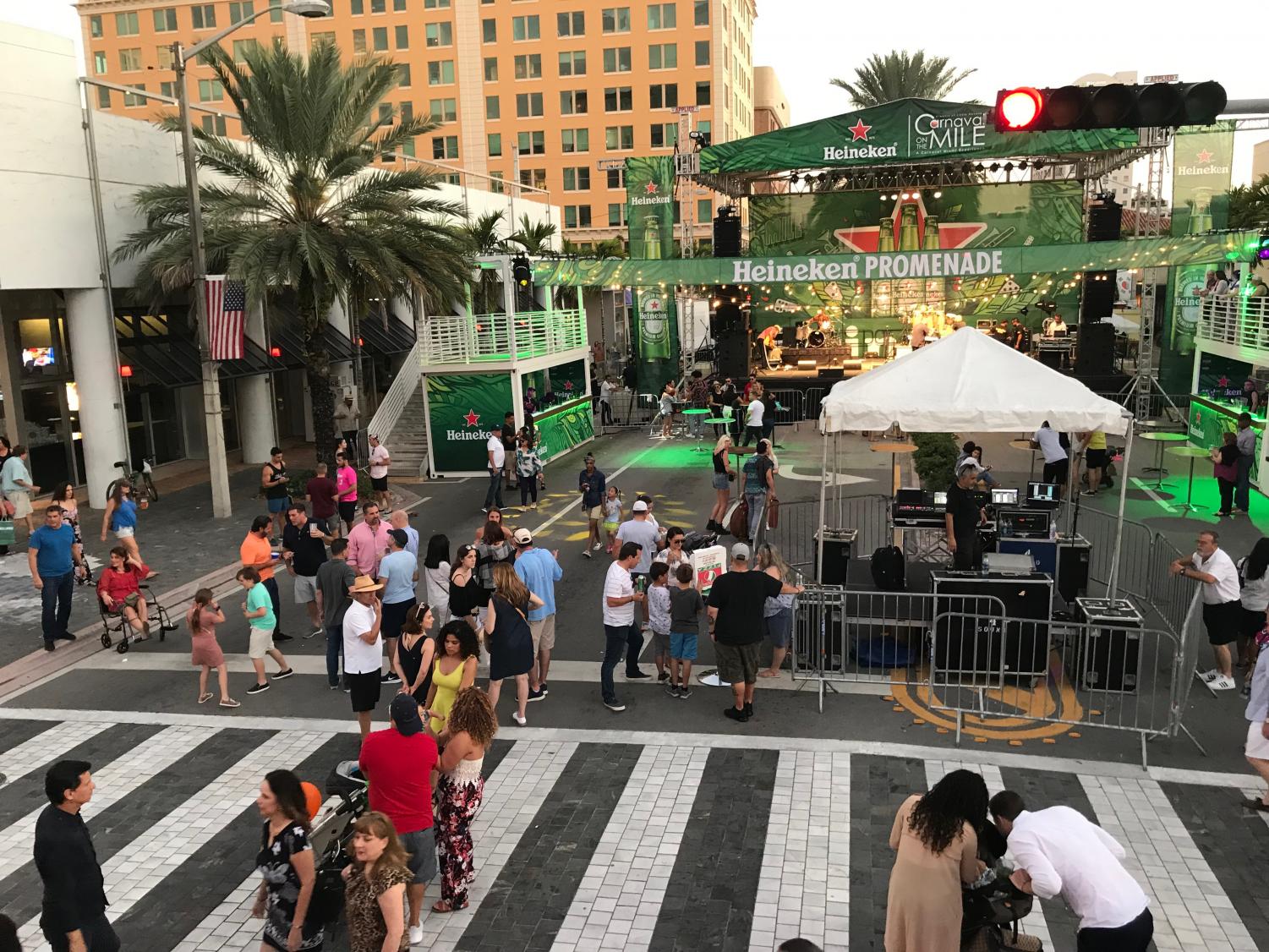 Carnaval Miami spread an air of excitement across the whole of Miracle Mile this weekend, lining the entire street with food stands, art exhibits and live music performances in an impressive display of the community’s culture.

The scent of arepas and overpriced bacon burgers blended with thundering jazz, funk and rock music from atop the Heineken stage on Ponce Boulevard, as thousands of patrons from all over Florida admired pieces of modern art and jewelry and dined at a blocks-long chain of local vendors’ booths this weekend. Carnaval on the Mile, which took place this Saturday, March 2 and Sunday, March 3 for its 21st consecutive year, was hosted by the Kiwanis club of Little Havana in order to drum up anticipation for next weekend’s Calle Ocho Music Festival, one of the largest music festivals in the world. The event, which was free to attend, celebrated Miami’s culture and brought dozens of world-renowned musicians and nearly 200 artists to the frequently packed streets of Miracle Mile.

Bands including Electric Piquette, Locos por Juana, Palo! and Monsieur Perine as well as singers Edan Archer and Alex Di Leo provided continuous entertainment as they each took the stage, with performances beginning around noon and ending just before midnight on both the Heineken stage on Ponce de Leon Boulevard and the Telemundo stage on Douglas road. As patrons enjoyed the music, they were able to purchase giant milkshakes at the Boca’s House stand, participate in the Publix-hosted “Cork & Fork” cooking class and take selfies under the modern art “Sunlit Sky” installation at the nearby Giralda plaza.

Carnaval on the Mile flourished even despite its recent rebranding. Formerly known as Sunday on the Mile, the day-long event was unrelated to the much bigger Calle Ocho Music Festival. Several years ago, the event extended itself to the entire weekend and was scheduled purposely a week before the larger event on Calle Ocho, and the results have been well-received by patrons of both events. The event attracted 30 sponsors, including local institutions like the Miami Marlins and Florida International University as well as nationwide businesses like Publix, Cafe Bustelo and Heineken.

Coral Gables Senior High had a presence at the event, with dozens of students, alumni and teachers from the school in attendance. World history teacher Sandy Leal-Garcia attends the festival with her two children every year. She told highlights that the festival’s great food and artwork are what keeps bringing her and her family back year after year.

“There was a painting about a dog, and it looked just like our miniature schnauzer, so the kids loved it,” Leal-Garcia said.

Junior Isabel Quintanilla attended Carnaval on the Mile for her third consecutive year.

“I got to explore Miami’s culture,” Quintanilla said. “My favorite part was the live music… I got to dance and have fun.”

Gables students were also present at the event to volunteer. Daniel Toll, a junior at the school, was working the booth of the League Against Cancer, helping to raise a total of more than $1,000 over the course of the weekend to be allocated towards cancer treatment and research. Spanish teacher Lissette Keedy sponsors the League Against Cancer. As Toll and his friends sold hot dogs, tamales and chips, they observed the festivities occurring around them, and during their breaks were able to participate in the event on their own.

“I especially liked the concerts… There was Hispanic music playing, so it appealed to different cultures, and a lot of different people were represented,” Toll said. “We went around to the different food stations as we listened to the live music — it was a good time.”

The event concluded at around 7:15 Sunday evening, though many patrons stuck around for several hours afterward until cleanup had been completed. The $40 million raised by the event this year will benefit children’s sports leagues, summer camps, school supplies and scholarships. Ultimately, although to some patrons the beating Miami sun may have seemed uncomfortably warm and the refreshments’ prices unnecessarily steep, the overall verdict could not be clearer: Carnaval on the Mile was a resounding success. The world-class music, flavorful snacks and stunning art displays created a delightful weekend-long festival for all residents to enjoy, and are set to greet Miamians in an even bigger way next weekend at Calle Ocho’s annual Music Festival.