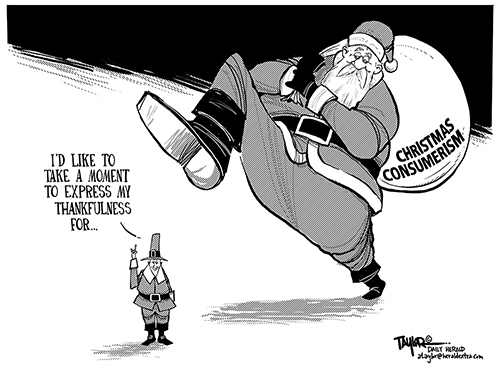 In recent years, with a spike in advertisement and marketing, the holidays have become centered on consumerism rather than spending time with family and friends.

As December and the holiday season is coming to a close, families have begun to put away their holiday decorations, choirs have stopped caroling and companies are restocking their stores. Culturally, we have accepted that as streets fill with Christmas, Kwanzaa and Hanukkah decorations, stores receive a heavy flow of customers due to their marketing of holiday promotions. Though the holiday season is meant to represent happiness, selflessness and togetherness, it has unfortunately become too costly to celebrate and is therefore more focused on the individuals who can afford to celebrate it all. People send money because they want to, but is it not mandatory.

Christmas trees for example, are exponentially rising in costliness. According to Bloomberg News, prices for Christmas trees have surged 17 percent in the past two years with the average cost of a live cut tree in the United States increasing from $64 to $73.

This issue is not new, and in fact, it began in the United States when companies began to profit off of the holiday season and to sponsor animated movies to promote themselves. Although the season technically begins in mid-December, stores begin festivities immediately after Black Friday ends, some even as early as Halloween. On top of that, some radio stations also do the same, by beginning to play Christmas music around Halloween. It has been calculated that a quarter of all personal spending takes place during the holiday shopping season, forming entire industries that are entirely dependent on the season, showing that the holidays are more focused on businesses making money than being together.

According to Historic UK, Christmas was not celebrated as a season of giving until the Industrial Revolution, because a lot of wealth was being generated, therefore making the holiday more focused on the materialism and consumerism. Books like “A Christmas Carol” written by Charles Dickens encouraged rich Victorians to redistribute their wealth by giving gifts to the poor. Children’s toys were normally handmade and expensive, limiting the celebration of the holiday to the upper class, but with mass production, toys were being sold at a price middle class families could afford. Eventually, poor children celebrated this holiday by receiving inexpensive gifts in a stocking, becoming a season of giving for all classes.

“Raised as an Irish Catholic, I was always taught that the holidays were always about giving, but being raised in a capitalist society focused on consumerism, I’ve realized that Christmas and other holidays are now just focused on big companies making money,” senior Way Samuel said.

The consumerist atmosphere that surrounds the holiday season is also resulting in the destruction of the environment. Last year, art collective Luzinterruptus created a work titled “Consumerist Christmas Tree.” This group is known for using scavenged materials to produce art, and built a giant Christmas tree consisting of 3,000 plastic bags from department stores to show how the consumerist aspect of this holiday is destroying the environment.

The holiday season has transitioned from solely focusing on the upper class and is now celebrated by all, regardless of economic status. While doing this has not only affected how festivities were traditionally celebrated, but also the environment. Instead of placing so much focus on buying, the holiday season should be about celebrating communion with family and friends and gifts should be more heartfelt, not just based on what is on sale in stores.