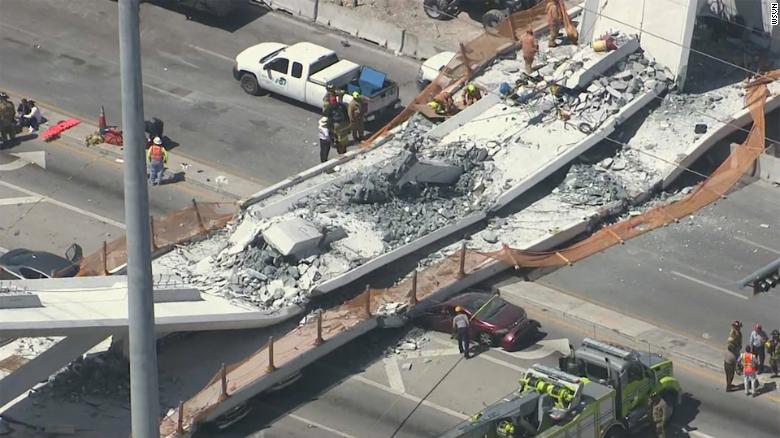 The collapse of Florida International University’s newly installed pedestrian bridge connecting the university campus to the nearby town of Sweetwater devastated all of Miami and proved fatal for six victims, including one FIU student.

The collapse of a pedestrian bridge over SW 8 Street near Florida International University’s (FIU) Sweetwater campus shocked and saddened the community as six people died and 10 were injured, according to the Associated Press. The long-awaited bridge had been eagerly anticipated by the surrounding community for years. The bridge was meant to beautify one of the entrances to the university as well as to connect the campus with the nearby city of Sweetwater, where an increasing number of students live. The bridge’s plans were drawn up in 2013, and construction began in March of 2016.

What should have been an exciting new addition to campus life has left students, faculty and staff mourning the victims. Many expressed disbelief in the wake of the tragedy.

“When I heard it, I couldn’t believe it, because they had just put [the bridge] up five days ago. It settled in once I saw it all over the news. Hearing those helicopters whirring over FIU all day, it’s really sad — this bridge was supposed to be a symbol of FIU’s desire to connect not only to Sweetwater, but, being the largest school in Miami, to connect the community. And it crumbled in the most tragic way possible,” David Drucker, an Honors College Student at FIU studying Broadcast Journalism, said.

Only five days prior, the bridge had been installed to much fanfare. It was built using Advanced Bridge Construction (ABC), a method that utilizes off-site construction and, often, prefabrication so that the final product can be set in place in a matter of hours or just a few days, instead of disrupting traffic for weeks or months.

The 950-ton concrete bridge had not yet been opened to pedestrian traffic. Construction had not yet been fully completed and was set to be finished by January 2019. The bridge fell during an adjustment by several workers; eight cars, several motorcycles, construction workers and nearby pedestrians were trapped beneath. A small number of victims managed to escape from underneath the collapsed bridge.

The university community, like the South Florida community in general, has been devastated.

The National Transportation Safety Board sent a team of 15 engineers to investigate the collapse. Local police and FIU are both conducting a crime scene investigation.

Many have been blamed for the collapse in the wake of this tragedy. Florida Gov. Rick Scott laid blame at the feet of FIU, which selected the designer and builder of the project. Accusations have additionally been levied against the Florida Department of Transportation, which was integrally involved in the project. The designer and builder are also under question. Cracks had been found in the concrete days before the collapse, and crews were performing post-tensioning force tests on the structure when it crashed onto the busy highway. Conclusive evidence about the causes of the crash is not expected from the investigations for several months.

The greatly awaited bridge was to boast multiple distinguishing and record-setting features once complete. After construction, the much-anticipated project would feature a 230-foot span and a 108-foot towering suspension. On either end, stairs and an elevator provided access to a 30-foot-wide walkway that was to include special lighting, a canopy to shield walkers from the sun, free WiFi and seating. The university received a $16 million grant from the federal government for the project.

Those that passed include 18-year-old FIU freshman Alexa Duran and 37-year-old construction worker Navaro Brown. The other deceased include Rolando Fraga, Alberto Arias, Osvaldo Gonzalez and Brandon Brownfield, according to the Miami Herald.

On Monday, March 19, a moment of silence was held at FIU to commemorate the victims of the fatal bridge collapse.

“We had a moment of silence on Monday at 1:47, which is about the time that the crash occurred,” FIU Student Government President Krista Schmidt said.

Additionally, a vigil for the victims is planned for Wednesday, March 21. “We want it to be an event where everyone can come together and commemorate the victims,” Schmidt said.

The ten blocks surrounding the bridge remain shut down, and could remain shut down for at least a week while debris is being removed and investigations continue. It is unknown whether the university will pursue a replacement bridge in the future. In August of 2017, a student was killed while crossing onto campus. It was just such an accident that the university hoped to avoid with the new structure.

With conclusions from the many active investigations still pending, and longer-term plans for the future still outstanding from FIU, more time will be necessary to determine the full implications of this momentous collapse. What can be gathered at the moment, however, is the impact this event has had on South Florida — such a tragedy will not quickly be forgotten.