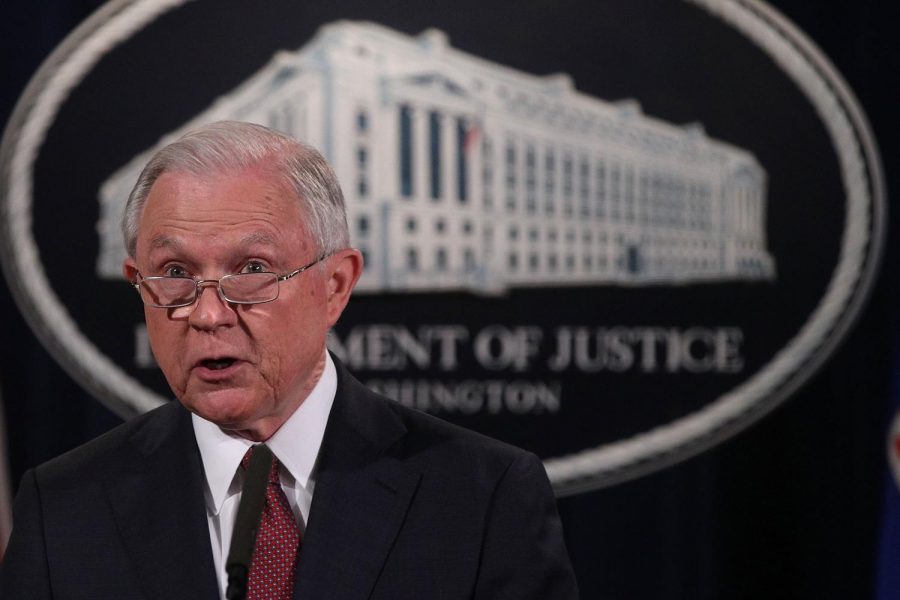 A few weeks ago President Trump had Attorney General Jeff Sessions reveal to the public that the Deferred Action for Childhood Arrivals, also known as DACA, would be repealed. This affects dreamers, adults and children who came to the United States as children illegally. Highlights got students’ opinions about the DACA repeal.

“I support his plans but I’m also half-half. His repeal helps American citizens and immigrants who came to the United States legally but it also makes the debt we have bigger since we’re losing workers. It’s a very controversial issue,” freshman Karla Sanchez said.

“I think what he [Trump] did was not a good idea because we have all these people who have sacrificed themselves and put their families in debt and studied. What he did, well, it’s not even valid, like the certificates they have might not be valid and I think that sucks,” freshman Kamila Hernandez said.

“I think he shouldn’t because it’s not their [the children’s] fault that their parents brought them here to America and not only to get away from their home country but to make their lives better I don’t think we should take them out. First of all the balance of the economy will go of because this is a huge part of Miami and all the immigrants that came here illegally because of their parents are now working really hard and I don’t think they should take them out. They might not even know the language from their own country, because they were brought here so long, they probably don’t remember anything about where they were born,” freshman Arianna Garcia said.

“I have mixed feelings about it because, yes they came here illegally but they are children just trying to get a better life in America and yes they’ve grown up now but America has been their view and focus for their entire life,” freshman Matthew Urra said.

“I think it’s wrong because many people are benefiting from that so he’s doing something bad for the people who are willing to stay on DACA,” freshman Joel Gallego said.

“Trump shouldn’t be doing what he’s doing. It is temporary so it was going to stop at some point. The whole point of DACA was too help the dreamers and I think he ended it a little too soon,” sophomore Isabella Piniera said.

“I think DACA is a good program. It helps undocumented immigrants get the education they have always wanted. Many immigrants who were raised here but weren’t born here benefit from the program. It gives them an opportunity to learn and grow here,” sophomore Antony Batista said.

“As Robert F. Kennedy once said, “Our attitude towards immigrants reflects our faith in the American ideal.” I feel this best represents these children who’s parents brought them here in, hoping that they would have a better life. It disturbs me too see that these kids that had no say in their future are being threatened to be sent back to a country they’ve never known, and who’s fates are determined by the results of the DACA repeal,” sophomore Lauren Urra said.

“I don’t agree with the decision Trump’s administration has made. His choice to repeal DACA would turn so many people’s lives upside down. Everything they worked for would be ruined and  I, personally, don’t think that’s ok,” sophomore Bowen Rodriguez said.

“I don’t really know about [it], but from what I’ve heard it isn’t really fair. He’s destroying the lives of these children and that isn’t good,” said sophomore Ellie Morris.

“It’s nothing more than a power move of senseless cruelty, taking away opportunity for a better life from millions of kids who do nothing but work hard and deserve to be here as much as we do,” junior Anna de la O said.

“The Dreamers are some of the most hardworking people I know, not necessarily because of who they are, but because of the position they are in. That’s something Trump and the White America he so passionately represents will never understand. To repeal the DACA act is reinforcing what dreamers have known and worked against all along: their other-ness cannot be shaken. Their identities are seen as one foot in America and one foot out the door. They’ve worked so hard to prove themselves when, in an ideal world, they shouldn’t have too. It’s heartbreaking, but with a president like that, is it a surprise,” junior Angie Lopez said.

“I think it’s disgusting, frankly, and a reflection of Donald Trump’s presidency as a whole. In only a few months since his inauguration, he’s continuously proved that he is cruel, ignorant, incompetent, and racist. Trump supporters wanted to end DACA without a basic understanding of what it is, they just believe that they don’t deserve to be treated as people. An argument to defend DACA is that recipients are integral to America’s economy, but it’s disgusting that they’re being viewed as money, rather than simply human beings. The DACA repeal lacks compassion, and i reflects racist, ignorant America that people refuse to believe exists,” junior Nat Brenes said.

“Donald Trump’s decision to repeal DACA has really shocked me. America was built on immigration. I think it’s crazy that the president is deporting thousands on nonviolent minors based on their status. Most of these immigrants come here because their countries aren’t safe and it’s really no fair that we are being forced to turn them away. No one deserves that,” junior Mia Galex said.

“He’s running the lives of a lot people and making it hard for the to live here. It’s not really fair. These people came all the way from another country, worked hard and are now being forced to go back to a place they don’t even remember. It isn’t right,” sophomore Ana Garcia said.

“I think DACA is pretty good because people come here looking for opportunities. This is the land of opportunity. You know we need to protect that and Donald Trump isn’t doing anything to protect our local community,” senior Ivan Batista said.

“What’s happening with DACA doesn’t personally affect me or my family but I do know people who are depending on DACA to live in America, people who are actually making an effort to get their residency for the very least and have to rely on DACA until they do, and I find that Trump wants to end DACA to be hateful and plain ignorant. There are people who come to America with hopes of a better life depending on DACA, so ending it also in a way is selfish of him,” senior Rene Guerra.

“It’s wrong to get rid of DACA since kids who were immigrants really didn’t have a choice when it came to their circumstances. So it’s really not fair that they’re being stripped of that (DACA). It’s not their fault. They’ve been living and studying here for most of their lives, it’d be unjust to just chase them out of the country like that when ll they’re trying to do is live free and get their education,” senior Kat Gonzalez said.

“I  don’t think it’s fair. All these kids who were brought to America as kids and don’t even remember their home country are now being told they can’t stay here. It’s really sad terrible and is just ruining entire livelihoods that people have worked all their life for,” senior Cameron Diaz said.

“I think the DACA repeal is a horrible choice. It has given undocumented kids a chance to study and be successful here in the US. Many people think it’s just a free pass but it really isn’t, they have to be perfect because any small infraction and they can get deported. For college they have to work extra hard because they are not entitled to any financial aid. therefore, they have to search for scholarships that they can even qualify for because they’re not considered permanent residents and that’s one main qualification for most scholarships,” senior Samantha Garcia said.