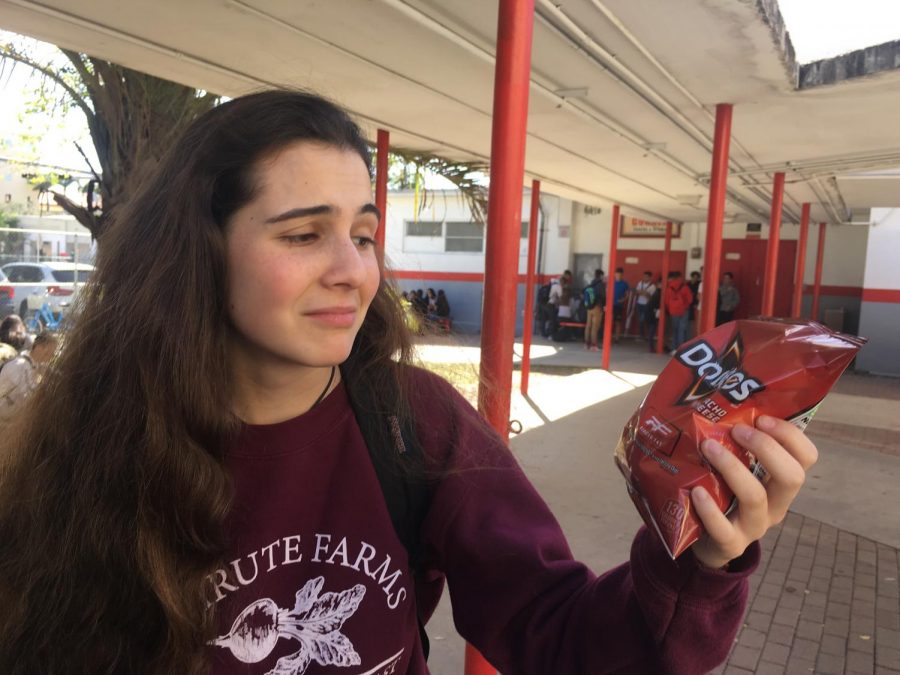 The new “Lady Doritos” have caused quite a crunch on the internet in recent days.

Soon after the Super Bowl, Pepsi-Co revealed intentions to roll out a new kind of Doritos marketed specifically for women: the “Lady Dorito.” This special chip would apparently be like any other Dorito, but would make less noise when chewed or crunched, which was supposed to be more appealing to women who, according to Pepsi, are uncomfortable making noise when chewing. Almost immediately after the announcement, many people voiced discontent with the new proposed changes, claiming they were bad changes for two general reasons: 1. It is a silly idea 2. It represents sexism present in today’s society. While it is a dull-witted and silly idea, it is not a an issue of sexism.

“The idea of having a new kind of Dorito just for women seems silly, and the more you think of it, it just keeps getting sillier,” sophomore Bridget Babani said.

Likely the most obvious downside to adding a new type of Dorito would be the unnecessary costs and hassles of a new product being produced, needing a completely new production line for the new product. This would cause more expenses for Pepsi, likely causing the new product to be more expensive than the original product, which some might say also ties into institutionalized sexism. Plus, there is the issue that Doritos are already an American favorite, being one of the most popular chips in the nation, appearing in almost every convenience store and vending machine throughout the nation.

Moving on, there is what many consider to be the more serious offense, claiming that the creation of a new product specifically for women is a byproduct of institutionalized sexism in America. It is generally considered to be a sexist move because it implies that all women desire to be less loud while eating. “Lady-friendly chips” are just another attempt to insult women and force typical stereotypes of what it takes to be lady-like. Companies producing products, such as Lady Doritos, only appear to be patronizing women. Moreover, snacks and everyday items should not be labeled accordingly to a specific gender. Women should be allowed to enjoy their typical, flavorful Doritos without the company trying to solve a problem that does not exist. Nonetheless, it should be taken into consideration that Pepsi was just trying to provide consumers with a new product. When a new product is created, it is made with a specific intent. Almost always, the intent is to make the company money. In some cases, the new product can be made to start the phasing out process of an inferior product, but no products are made to purposefully discriminate against others. The time of purposely discriminating products has passed; it is no longer the 1960’s and people are free from being randomly oppressed by consumer products. The new Doritos were an attempt, although a poor one, to put a new and fresh spin on a classic thing. The execution was done very poorly, walking the line between progressive and helpful and regressive and oppressive. While the new Doritos were clearly made to simply appeal to a small but significant minority of customers, they fell flat in their attempt, causing Pepsi-Co to appear sexist at a time when such an appearance can ruin careers and companies alike.

“In my opinion, I think it was highly offensive of Pepsi to come up with the idea of ‘Lady Doritos,’ as if women are incapable of enjoying some crunchy chips like men,” junior Nelsa Tejada said.

Despite Lady Doritos being a silly and somewhat sexist idea, those with social anxiety, who are highly uncomfortable with eating aloud or in front of others, can benefit from this new product. In fact, some may argue that Pepsi was actually trying to raise awareness about the struggles. Eating and drinking can trigger high levels of extreme anxiety, and the loud crunches of chips can only elevate the stress individuals can face. About 25% of people diagnosed with social anxiety disorder are significantly impaired by the disorder and can no longer live a normal life. In many cases, those who have social anxiety and the fear of eating or drinking in front of others must reach out for treatment. Therefore, why many argue that Pepsi-Co was trying to create a product for women who are self-conscious of themselves eating.

However, while there are likely to be some that argue that the new Doritos will help people that are self-conscious about eating loudly, this is simply not enough of a reason to create a new product. It will only be useful to and therefore bought by a tiny niche of people, which will cause an unnecessary loss of money for the company that is not beneficial for the consumers. Moreover, Pepsi-Co should have targeted the product for all of those who suffer from misophonia or the fear of eating in front of others instead of specifically targeting it for women.

“At first I thought the whole idea for Lady Doritos was a joke, and I still think it was a joke, because there is no way that could have actually been decided on in a conference room. Maybe in the company cafeteria, but not in a place of business,” sophomore Jonathan Mesa said.

In conclusion, while Lady Doritos were most likely an honest attempt to make a small portion of consumers happy, it was done very poorly, agitating everyone with their unintended sexist product targeting a little crunch. Nonetheless, women should continue to crunch on as they please.