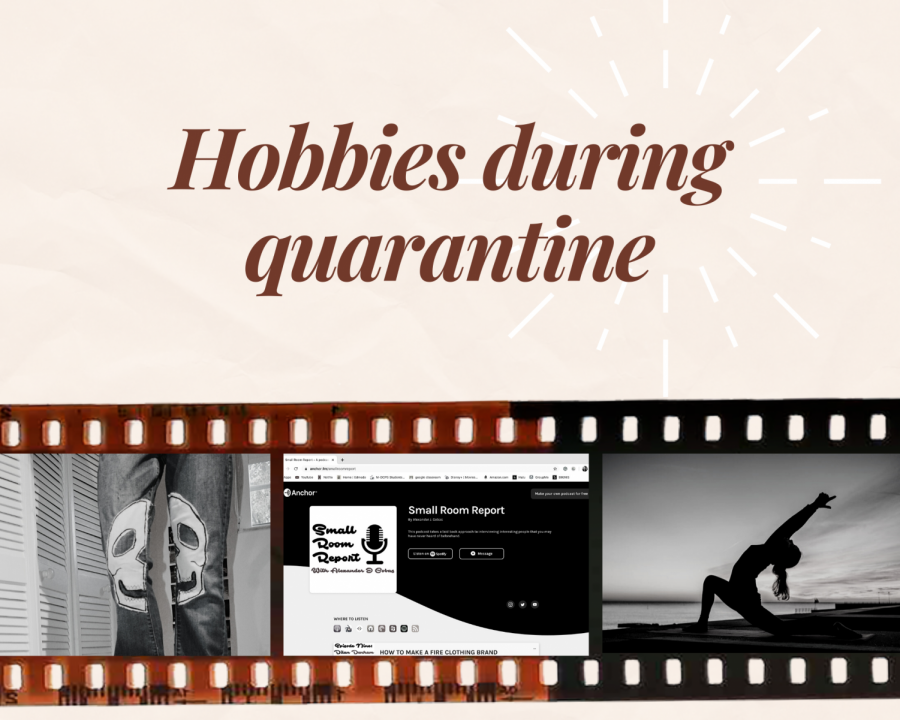 Our Cavaliers discovering new hobbies throughout this break. Ranging from youtube to stretching in your living room, everyone can try something new.

The entire world is going through an unsettling time right now because of the coronavirus–schools have been canceled, millions have been laid off, stores are empty and people are required to stay home. Evidently, we can not do most of the things that we would usually do here in Miami such as going to the beach, eating at a restaurant, or even going to your friend’s houses. However, our Cavaliers have found clever ways to keep themselves entertained inside of their houses and making the best out of this scary situation.

Senior Alex Cobas wanted to start a series of podcasts back in July of 2019, he even released his first episode. Unfortunately, he did not make any more since school had started and he had to focus on his academics first. Now that we have been in quarantine he has had the time to get back into it. Since then he has been able to do 1-3 interviews a day.

His podcasts are called Small Room Report which are interview-style podcasts where he asks questions related to what the person does but on top of that talk about events going on within our society and pop culture. The main platform of the Small Room Report is youtube and his goal is to hit 1,000 subscribers. He hopes that as time goes on, he can grow a larger audience and in turn get more well-known guests on air.

The most difficult thing for him at first was to figure out what questions to ask and how to ask them but since then, his presentation has improved. He wishes to sharpen his public speaking skills to allow him to give back to his community. Cobas loves to learn more about his guests and listening to their responses is his favorite part about his podcasts. The main platform of the Small Room Report is youtube and it is also available to stream on Spotify, Apple podcasts along with other platforms.

Cristina Abello, a sophomore in the International Baccalaureate program has kept herself busy during this quarantine. She was always very interested in fashion and growing up she expressed herself in her clothing. When she entered Coral Gables Senior High, she wanted to explore the fashion aspects the school had to offer. Abello decided to take a design class at school with Mrs. Monzon as her teacher and that is where she learned how to sew.

“Most of what I wear and make is personal to me, I sit down for hours with fabric and a sewing machine and just make something out of it. If I am not making clothes, I am redesigning it. Whether it is, making it a different style or painting on it, I express myself through it,” sophomore Cristina Abello said.

Abello’s favorite part about making her own clothes is that she gets to recreate something she took a liking to. Whether she saw it online or she had an idea herself, she has to tools to allow her to bring her vision to life. The hardest part for her was figuring out how to use the sewing machine but because of quarantine, she has been able to improve so as a result, she has sewn a lot more. When she first started it was making something new out of old clothes but now, she also started to make clothes from scratch.

Abello decided to make an Instagram @thevintagelocals where she sells her designs to anyone who reaches out. She hopes others like what she has to offer and wants to keep learning as well. She now spends her days making her own designs and looking for new ways to keep expanding her artistic skills in fashion.

Sophomore Noora Pharaon has watched her mother do yoga for the past three years and when quarantine began she wanted to figure out a way to maintain herself busy as well as entertained.  Her mother usually does yoga for around an hour on Saturdays in their living room. She has watched how yoga has relieved her mother from joint pains and back pains which is why she decided to start yoga too.

“Depending on the day and time, my mother instructs the lesson or we do a facetime call with her coach. I love trying new poses in every lesson and it really pushes me to do things I would not have done otherwise. I think everyone should try to find something productive and beneficial to do during this quarantine because it helps pass the time as well as help your physical health,” sophomore Noora Pharaon said.

Pharaon is on the water polo team at school and hurt her knee as a result of training. She had to undergo knee surgery in October 2019 and since then, she has been reconstructing her muscles around her knee. Evidently, it has taken a while to heal and she has been putting her all to try to improve her muscle strength. Being in quarantine has given Pharaon the time to focus on her physical therapy and yoga felt like the right thing to do. Yoga is not only helping her with the pains in her knees but with allowing her body to recuperate and go back to the way it used to be.

Pharaon loves to see the progress she has made, now her knee has gained the rehabilitee to move. She has grown slowly the muscles back and it is extremely self-rewarding. The pains have been decreasing as the days are passing by. Yoga was always something she saw as difficult but she has grown a connection with it she never would’ve expected. She has used muscles and activated parts of her body that she was not necessarily using before.

The first time she tried yoga, she had to take breaks and could not hold the positions for a long period of time. In spite of that, she is now able to have longer sessions and stay in positions longer than she could’ve ever expected. Her goal for doing yoga is to gain more flexibility in her knees as well as the muscles around it. Pharaon hopes yoga will be a good remedy for her pain and allow her to be as she once was.

These three Cavaliers have discovered different ways to keep themselves busy during these rather dark times. All of them have either picked up a brand new hobby or pursued and improved in a hobby they already had. Nonetheless, it is an example others should follow, allowing yourself to learn something new is a way to pass the extra time we have. It allows people to mentally, physically and emotionally feel better and it is always good to try to do something productive.