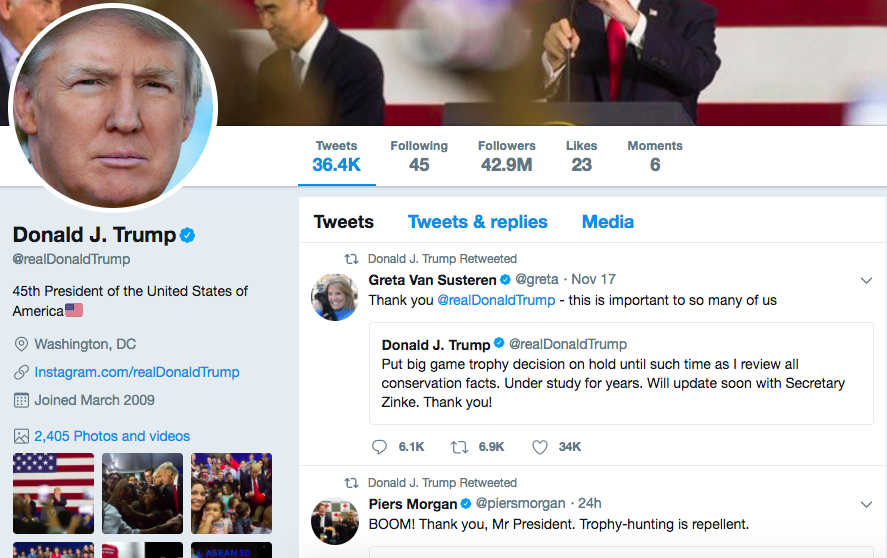 In honor of Twitter doubling their maximum character count to a grand 280 characters, it is best to reflect on the great tweets that have been blasted to the general public through this now infamous platform. Donald J. Trump, also known as the 45th president of the United States, has little hesitation in pausing Fox News to send a quick message with the hit of a blue button, and usually says whatever is on his mind with no regard to how his upwards of 27 million followers will react. Thankfully, his tweets (although often inflammatory and negative), are capable of having a silver lining in the form of the age-old coping method: humor.

This tweet represents the quintessential Big T in all of his orange glory. He goes in for the kill on his at-the-time opponent in the Republican primaries, Ted Cruz, by attacking Cruz’s reputability, temperament and ability to function under pressure – all in under 140 characters. As Donny would say, this is a bigly Big League tweet. As for context, there really is none. Trump was likely responding to Cruz’s frustration over one of Trump’s own tweets. This tweet is most likely directly addressing Teddy’s irritated response or – as someone (I wonder who) would put it – “completely wacko statement.” As for critics who argue that this tweet was far from being presidential, technically speaking, “presidential” is however the president acts, and the way Trump acted could not have been considered presidential at the time. However, it is clear that Trump’s actions are certainly very different from Cruz’s. As for being under pressure, it is not uncommon for people to not function as well when under rather strenuous conditions. Overall, this is a great tweet, both in delivering a detailed and accurate report on what happened that day and in sating people’s “funny tummies.”

Contextualizing this tweet is a difficult task considering Trump’s long and rich history with his Korean counterpart, Kim Jong-Un. Their feud dates back to the 1950s, when Kim Jong-Un stole Trump’s girlfriend in high school. Oh wait, contrary to what this tweet implies, that is not the case. The reality is that the events that resulted in this Internet blast are truly political in foundation, something of an outlier on our great president’s timeline. The ever growing tension between North Korean and American relations in nothing to joke about, leading to this tweet being rated a D in our book. When it comes to international relations between nations with nuclear weapons, responses should be all or nothing. In this tweet, Trump failed to either completely disarm every last North Korean nuclear missile or obliterate the North Korean dictator, both of which were expected within seconds of his taking office. Sad!

“Trump tweets way too frequently about unnecessary information only to stir the pot and makes millions of people uncomfortable,” junior Alain Perez said. 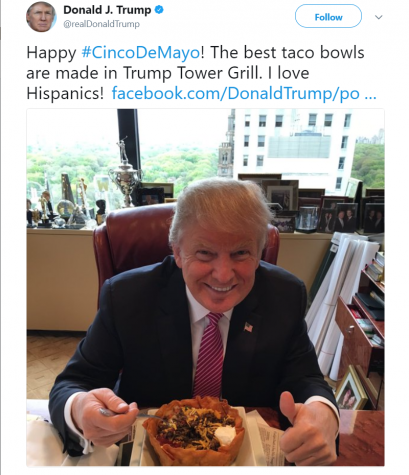 Although this tweet is one of the Big T’s most controversial ever, I see no reason why. It is clearly meant to show that Trump understands that “hispanic” isn’t just one ethnicity, but rather that there are over a dozen nationalities. However, Trump seemed to have made it clear that he has a rather rocky relationship with hispanics in previous speeches and tweets; he once referred to them as rapists and murderers – not very kind. So then, what kind of message could the Don be trying to send? To figure this out, we need to delve into the smaller details of the photo included in the tweet. If you look at the caption, it references Trump Tower making a taco bowl, an American spin on the traditional Mexican dish. Therefore, the only plausible conclusion is that Trump intends to tower over Mexico with his strict immigration policies, not the rest of the Hispanic countries which he clearly loves (he said so verbatim), and put an American spin on the country and their government, because what kind of country doesn’t have it’s own governing body that is rife with bribery, corruption and sexual misconduct?

“Trump’s tweets are very funny, and they let the American people laugh in this age where people don’t tend to laugh as much,” sophomore Ty Almeida said.

The Internet allows us to express our opinions and laugh at the opinions of others. Trump has a long history of typing before he thinks, which can become problematic when his responses to petty feuds affect the lives of those whose interests extend past the idea of a retweet. In analyzing Trump’s greatest hits, it can be concluded that however funny they may be, the future of this country is in large (definitely not “tiny” or “small”) orange hands that cannot fathom the seemingly obvious repercussions to certain actions. All in all, we must take Donny T’s tweets with a grain of salt, but be wary of their consequences.