The Zombie Frappuccino: Better Left for the Dead 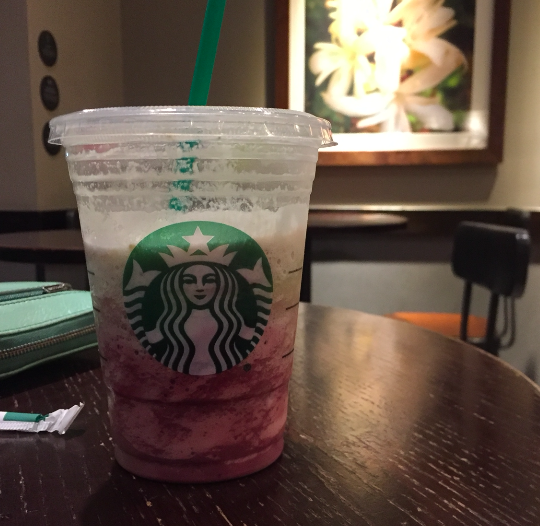 The store's shortage of pink whipped cream led to an even greater unappetizing appearance.

Anxious to spend my Starbucks gift card, I entered the franchise determined to try a new cult beverage: the Zombie Frappuccino. As I waited in line to order, I questioned whether I should really spend the free drink that I had earned on a fad that would probably underperform my expectations. Oh how I wish I had listened to myself.

“I love Starbucks coffee because it is a great pick me up after practice but I usually stick to traditional black espresso,” junior Dominique Babin said.

Making small talk with the cashier, I continued to weigh the ramifications of this decision. Was looking like a basic teenager truly worth the experience of this drink? (It wasn’t.) When it was finally my turn to order, I approached the counter and proudly stated my choice in drink. To my surprise, the barista didn’t respond by asking for my name as they usually do. Instead, he responded, “Are you sure?”

The barista had tried to warn me that my gift card was better spent on another cult classic like the Pumpkin Spice Latte, but I was adamant in my decision (what a fool I had been). He sighed and then apprehensively inputted my order, watching me carelessly throw away $5.

Waiting in anticipation, I couldn’t sit still. The barista walked the order over to my seat and waited for me to try the disgusting beverage he had replicated. He apologized that the drink that had been ordered as a tall was presented to me as a grande instead, a mistake that usually most would be grateful for. At first sip, I was instantly filled with regret. The mix of soft green apple with strong hints of mocha syrup made me sick to my stomach. I instantly reached for my water and prayed the taste would be washed away.

“At first I was excited to try it but it turned out to be a major fiscal mistake. Whoever came up with it should be fired immediately,” junior Dylan Carol said.

All my barista had to say was “I had tried to warn you,” and I wish I had accepted his advice and spared myself of this experience, and I strongly urge you to do the same.