The Dangers of the Sex Trafficking Business 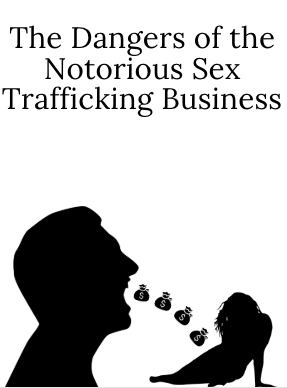 The threat of sex trafficking is one rarely talked about, but is one that is all too common.

The illegal selling of women and children for sexual exploitation is a worldwide phenomenon that occurs across the world. Also known as sex trafficking, one of the world’s largest unsettling issues occurring all around us has affected the world for decades. These women and children go through inhumane experiences in which they are forced to participate in sexual activities for money that is later given to their trafficker. These horrible experiences include torture, physical or emotional abuse and even death. It is a secretive and clandestine business that stands in second place as the largest crime industry behind drug cartels. The number of humans that are sex trafficked worldwide is shocking, according to the National Institute of Health more than 800,000 people are trafficked across international borders annually, 80% of them being females and 50% are minors.

As scary as this sounds, the people who control the business have a variety of ways to lure or trap their victims. According to the non-profit organization End Slavery Now, the average victim is usually a young woman or child. When placed in the trade, a victim can be raped more than 10 times a day which eventually leads to the contraction of sexually transmitted diseases. Most victims die prematurely or are forced into the trade as adults. The Sex Traffickers are known as pimps. These pimps have various ways to gather their victims. 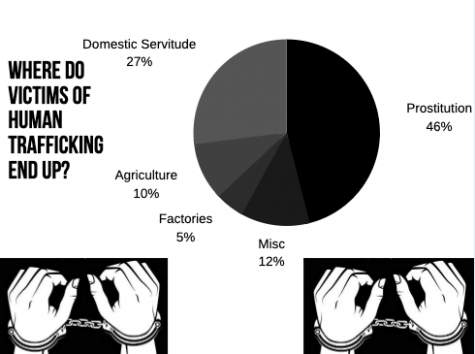 Maria PuyanaThis chart demonstrates that the majority of Human Trafficking victims end up in prostitution.

One of the many ways to lure the woman or children into sex trafficking is by appearing convincing and nurturing to their victims at their most vulnerable times or when they have no one to support them. They tend to help and demonstrate appreciation to gain trust when they see helpless victims who fit the normal age range or qualities required to be implemented in the trade. Signs that can identify these predators are not allowing contact with families, offering opportunities that seem too good to be true, asking you to do things out of your comfort zone, using violence to create fear and blocking access to your income. Once they gain trust, pimps manipulate their victims into the trade. However, once you are in, it is hard to get out. Pimps threaten their victims and their families with emotional and physical harm which prevents them from contacting or getting help from the authorities.

¨Sex trafficking is something common that we see nowadays, but we are not aware of most of it because most cases are kept private. It should be acknowledged. Not doing so allows people to be oblivious towards the dangers out in society,¨ junior Ariana Boffill said.

Another infamous way of gaining victims is kidnapping. In recent months, the increasing number of girls going missing throughout the United States has been linked to sex trafficking. According to Missing Kids Organization, in 2016 they received 8.2 million reports, most of which are related to apparent child sexual abuse and it also included cases of online enticement, child sex trafficking and molestation. It is important to always be aware of your surroundings and. in any case where you feel uncomfortable, do not hesitate on contacting the closest security or person near you.

Social media is also a huge factor that gives access to these predators and their victims. It is a platform that can give predators communication and access to their victims, especially to manipulate them and gain their trust. It is recommended to maintain your social media accounts private and to block any potential or unknown followers. Also, if you see any suspicious activity on social media, report it at once to your local authorities. These mysterious activities can be suspicious comments, inappropriate private messages or child pornography.

In addition, another factor that contributes to Sex trafficking is poverty. Sadly, many victims share one common factor and that is that they are economically poor and vulnerable. Women looking for economic security lead on offers of employment from people they trust hoping that they can send money back to their struggling families or close friends. Also, many parents often give sex traffickers their children for their well-being and education. In some cases, desperate parents might sell a child into enslavement for the economic opportunity given to their family.

It is important to share the awareness of this topic to current and future generations. This business is responsible for the deaths of these innocent victims. To prevent this from happening to you or any of your close friends or family, it is essential to inform them about being aware of their surroundings at all times and knowing how to identify signs that could save their life or someone else’s.

Anywhere you go, allow a trusted friend or family member to know of your whereabouts at all times. If you feel like a person might be in danger the smartest thing to do is to contact the authorities and gather as much information without putting yourself in danger first. If you know or suspect that any of your friends or acquaintances might be victims of sex trafficking the best thing to do is speak to them and anonymously report it to your school administrators or the authorities.

¨Sex trafficking is a cruel practice that has been around for centuries, especially in the United States. The mental and physical toll that it takes on thousands of young ladies and children are those that cannot be justified by any means. By notifying females and those susceptible to sex trafficking, it allows them to notice signs of a potential kidnapper, signs that an average person would not realize,¨ sophomore Isiah Middleton said.

Ways that you can collaborate on this issue include donating to non-profit organizations like ECPAT who empower the importance of this issue to youth, work on changing worldwide government legislations to reduce sex trafficking in most countries and train citizens and first responders on identifying victims. There is also End Slavery Now; this organization does not only battle sex trafficking but it also dives into the current slavery issues occurring across the world. Lastly, if you or anyone you know might be in danger of becoming a victim, contact the National Human Trafficking Hotline at 1 (888) 373-7888.