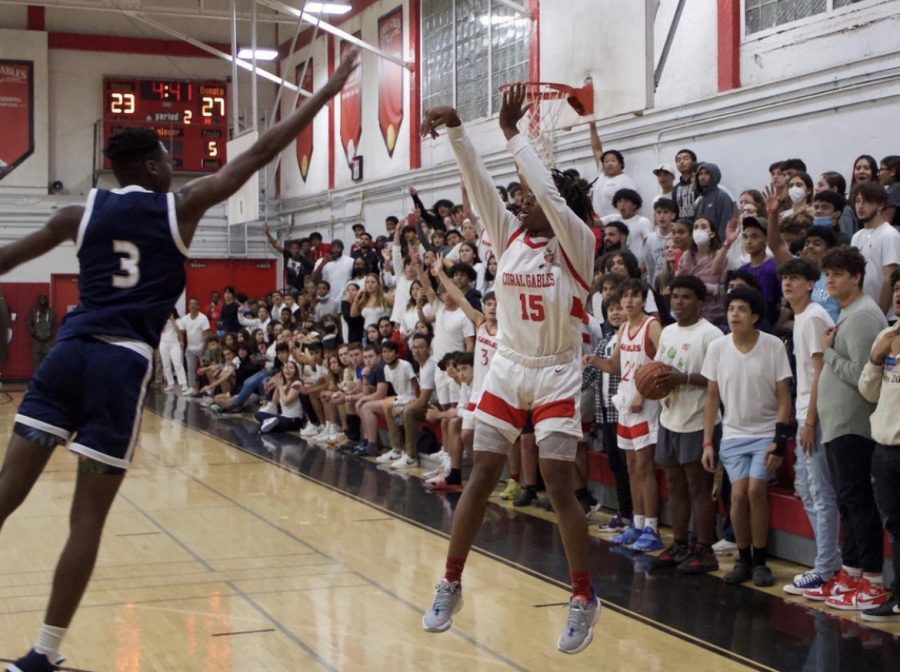 With the start of basketball season, the Coral Gables Senior High Cavaliers had their first home basketball game against long-time rivals, Miami Senior High School. On Thursday, Dec. 2, tickets sold out as Cavaliers and Stingarees alike were eager to watch the long-awaited showdown.

The match was a white-out game, meaning the Cavalier crowd was encouraged to show up in all-white to support their team.

The rivalry between Gables and Miami High is longstanding, and the passion of the crowd was evident as each fan section came up with their own creative cheers to shout at each other.

The Gables basketball team opened up strongly with a three-pointer by senior and captain, Romulo Delgado. However, Miami High did not give up points easily and took the lead shortly after.

The crowds behind both teams were going crazy, yelling and jumping out of their seats at any and all scores. The Gables basketball team took inspiration from their spirited fans in the stands and fought hard. Each free throw attempted by the Miami High team was met with chants of “Miss it!” from the Gables cheerleaders.

At half time, the Stingarees led with a score of thirty-one to forty-three, but Cavaliers still did not lose hope. The Gablettes performed a halftime show, donning white sweatsuits.

The performance was a mix of hip-hop dances and cool tricks, and the crowds sang along to a remix of popular songs. Players, cheerleaders and fans all cheered on their Nationals-winning dance team.

Both basketball teams returned from halftime ready to play hard, and tensions were high as the interactions between crowds became more passionate. Cheerleaders led the crowd in a chant of “Whose house?” to which zealous Cavaliers responded “Our House!”

“The game was so intense, I almost felt as if I was playing on the court myself. We were all screaming our loudest and I felt a collective school spirit that I haven’t felt in a long time,” senior Andrea Delgado said.

At the beginning of the second half, the Stingarees began to pull ahead and the Cavaliers began pulling out all the stops, boxing out the opposing team and blocking shots.

Senior Danny Gonzalez broke free from the Stingaree defense and scored two three-pointers in a row. After a hard-fought battle, the Cavaliers ultimately ended the game with a final score of 71-85.

“Of course none of us wanted to lose that game in front of our home crowd but we fought hard and there were many positives that came out of that game. It’s a process and our goal is a championship at the end of the year, not one single win,” senior Romulo Delgado said.

This leaves the basketball team with a record of one win and two losses at this point in the season. Despite the loss, this is not the end of the season, and the next home game is on Jan. 6 versus the Doral Academy Firebirds.