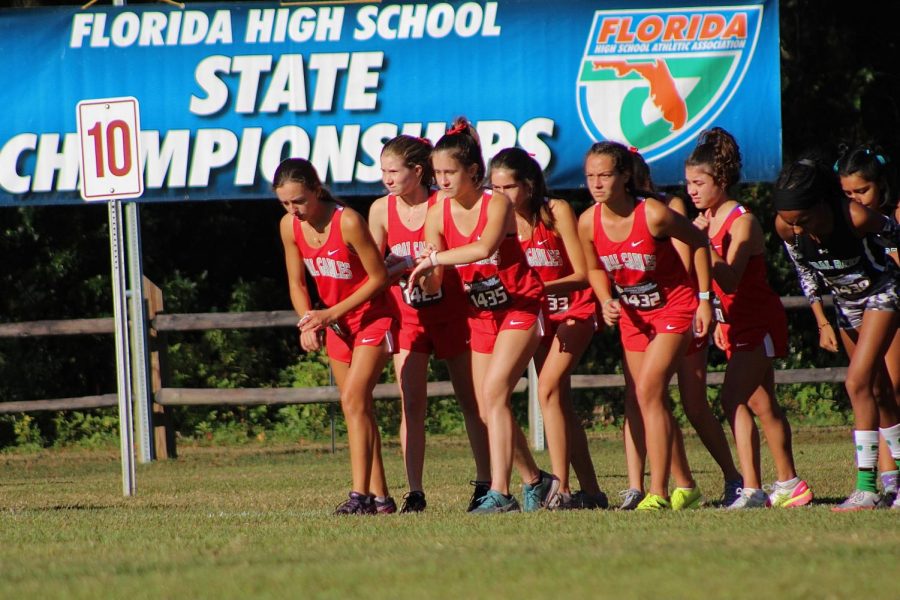 The Gables cross country girls lined up on the starting line about to begin the race.

After a long season of hard work and perseverance, the girls cross country season has finally come to an end with the top seven varsity girls competing at States this past week under the 4A category for girls.

Having placed in the top eight teams at Regionals, the Coral Gables Senior High girls cross country team made it to their final level: the state championship. States took place in Tallahassee on Nov. 12 at Apalachee State Park, where athletes Catalina Quinteros, Isabella Morales, Ariadna Torras, Prune Mathiot, Priscilla Scullin, Audrey Simon and Veronica Montalvo all competed alongside one another against 32 other teams from all around Florida.

In order to adjust to the new terrain and environment, the girls team left Miami at around 5:30 a.m. to run the course and go over the race before it got too dark. The next morning, the girls woke up early and ready to race, preparing with a light warmup while sporting their red and white Gables cross country tees.

“States is an experience that I’m never going to forget, because not only was I able to race on a nationally recognized course, but I was also able to do that alongside my teammates. Since we’ve been creating this bond throughout the entire season, you know, being able to experience that alongside them and Nelson and Fotso, it’s just something that really meant a lot to me because it just shows how much we’ve progressed throughout the season and has paved a path for where we want to be next season,” junior Isabella Morales said.

At around 6 a.m. on the day of the race, the girls headed out to the venue in which States was held, and started by warming up and participating in dynamic stretches to get the blood flowing before starting. The team competed in the first race of the day at 9:10 a.m. with the other 4A girls teams.

Gables placed 31st overall, and top runner sophomore Catalina Quinteros finished in an impressive time of 21:31. Not having been to states since 2016, Coach Nelson and Coach Fotso have expressed their pride in how far their athletes have come.

The primary goal of the cross country team this season was to make it to States, and, after finally reaching this point, the cross country season has officially ended. This opportunity has motivated the girls for next season and given them a sense of pride in themselves and in their teammates or, as they refer to each other, their second family.

“It felt amazing being able to compete in states alongside such wonderful people including my amazing teammates. It was amazing and very rewarding knowing we made it this far. States is a big deal and hard to get to, so just being able to be there with everyone made me overwhelmed with happiness,” sophomore Veronica Montalvo said.

Despite the fact that the season is ending, the cross country team plans to come back stronger than ever next year and make it to States again. By practicing in the off-season and increasing mileage, by next August the team will be ready to run even better than they did this year and place even better next time.