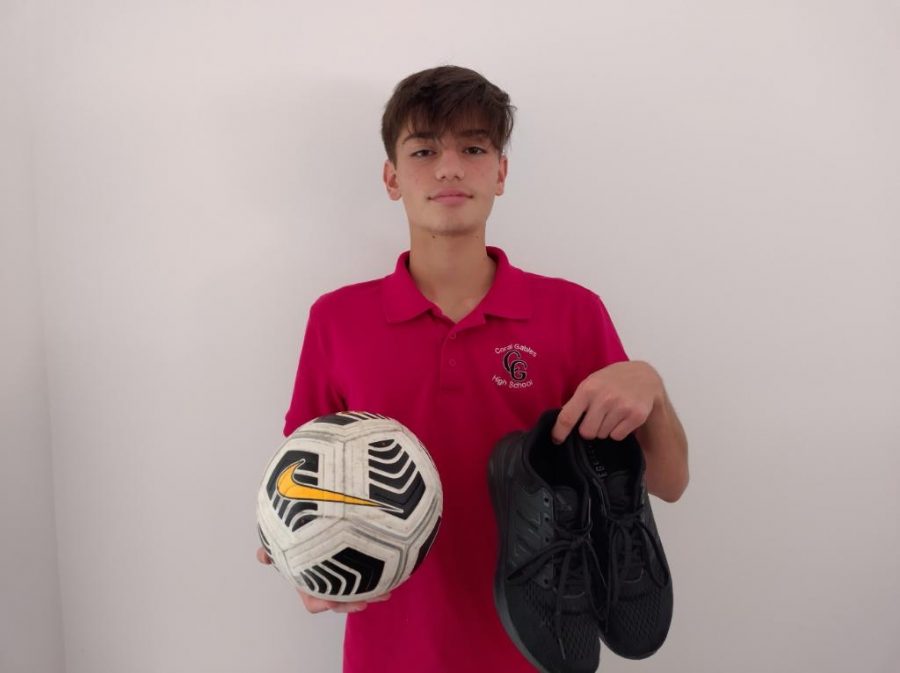 Freshman Santiago Gonzalez has set high expectations for himself this school year. Aside from competing with the Cross Country team, Gonzalez is hoping he can make it onto the Cavaliers Varsity soccer squad.

Juggling two sports while managing an extensive 8-class workload can be a demanding daily routine. For freshman Santiago Gonzalez though, this schedule is nothing new. Gonzalez has skillfully managed to meet expectations during practice and inside the classroom.

Gonzalez is currently participating in the Cross Country team and is hoping to earn a slot on the Boys Varsity Soccer team this upcoming winter season. Prior to tryouts, Gonzalez has been trying to perfect his defense by putting in the work every day.

The athlete explained that he has been training on his own and working out twice a day in order to achieve his goal. He often performs exercises that focus on the abdominal muscles, legs and upper body.

“I’m definitely looking forward to what this year has in store for me. Obviously, I want to compete to my best ability as a runner but I also want to improve as a soccer player and hopefully make the Cavaliers varsity team,” freshman Santiago Gonzalez said.

Gonzalez started playing soccer when he was just four years old in a soccer club for kids his age when he began to develop a passion for the sport. At eight years old, Gonzalez began playing for Juventus, a competitive soccer club that competes in tournaments against other teams in Miami. Currently, he is playing with the South Miami United Football Club and partaking in several tournaments across the state of Florida.

Leading up to this school year, Gonzalez has been training diligently and honing his soccer skills prior to tryouts. In addition to spending countless hours on the soccer field, Gonzalez has also been conditioning on his own, building up his stamina, endurance, strength and agility. A significant part of the process was running, which is what motivated him initially to join the Cross Country team.

“I really like to compete and challenge others. I like running so I thought joining a sport like Cross Country would be a good choice. Also, part of the reason I chose to run for Gables was to get ready for soccer both physically and mentally,” freshman Santiago Gonzalez said.

Gonzalez explained that he is content with his Cross Country coaches and impressed how committed his teammates are to competing with other schools. Everyday he runs different courses with the team and pushes himself to run a little faster every day. Eventually, Gonzalez wants to reach his goal of running a 5k race in under 19 minutes.

“I think Santiago has demonstrated the athletic ability to achieve great things. It will take hard work, but I do believe he will be successful,” head Cross Country coach Scott Nelson said.

Gonzalez has set the bar high for himself this freshman year. While striving to succeed academically, Gonzalez’s main focus for this school year is to compete with the Cross Country team and hopefully make the cut for the Cavaliers Boys Varsity soccer club. Gonzalez is prepared to make Coral Gables Senior High School proud and represent the Cavaliers in not one but (hopefully) two sports.