Girls’ Volleyball “Sets” Up for the New Season 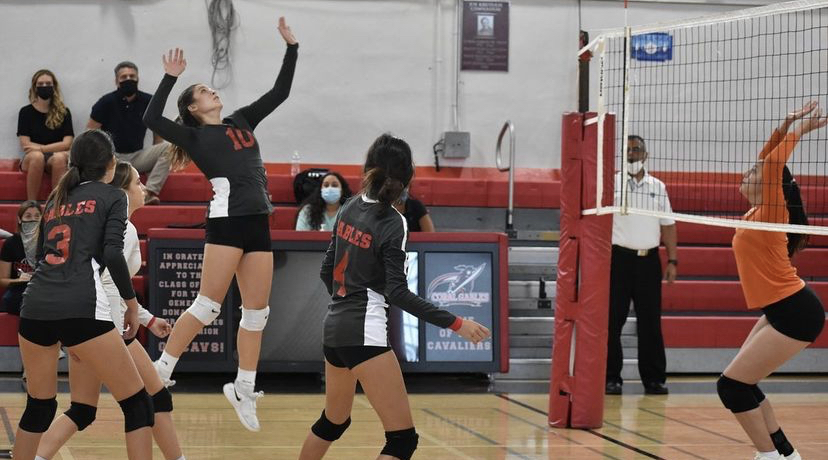 The Lady Cavaliers facing off against South Miami High School.

Following a year-long absence, the Coral Gables Senior High girls volleyball team is back and ready to jump into action. With the varsity and junior varsity player list narrowed down to 30 players total, the team has been preparing for the upcoming season since the start of July.

With the start of the school year, the Lady Cavaliers began training inside the Gables gym three times a week. Each practice varies depending on where the team may need improvement, but they usually begin with conditioning, which involves running laps inside the gym. Dynamic stretching follows, which improves a player’s agility, speed and acceleration.

Other than conditioning and dynamic stretching, practices may differ greatly as the team works on various aspects of their game. Training techniques include getting into groups to work on passing, serving, setting and spiking to one another, an exercise known as pepper. The players challenge themselves by performing these drills in small spaces to ensure that they can maintain full control of the ball. They also use games like Queen of the Court or Speedball to practice implementing these abilities into their games.

“We still need to practice, but I feel that we can do well in the upcoming games,” junior Sandra Hanuschik said.

Because of the team’s emphasis on positivity and teamwork, huddles are held before every game to mentally prepare the girls and keep their spirits high. Working as a team is beneficial as the girls have one another to rely on for support on and off the court. Before they start, they build one another up with encouraging words. Alongside them are their coaches to push them to be the best athletes they can be.

“We did a great job to overcome the adversity we faced with our injury, and we worked around it to decimate them,” junior Avery Felix said.

Their next game will be on Friday, Sept. 3 against Westland Hialeah Senior High. They are striving to do the best they can despite their main setter, Martina Ruiz, facing an ankle injury. In the middle of the second set of their last game, one of her teammates accidentally rolled into her while trying to hit the ball. Luckily, she is on the road to recovery and will continue to play with the team in a few weeks.

Since the team is without either setter, they plan to have some of their other positions train for setter while the setters recuperate their strength. The Lady Cavaliers have many more games to come to showcase their talent, hard work and dedication, and they will continue practicing daily to ensure they are leaving their all out on the court.