Kicking it to the Top: The Gablettes’ Journey to Becoming National Champions 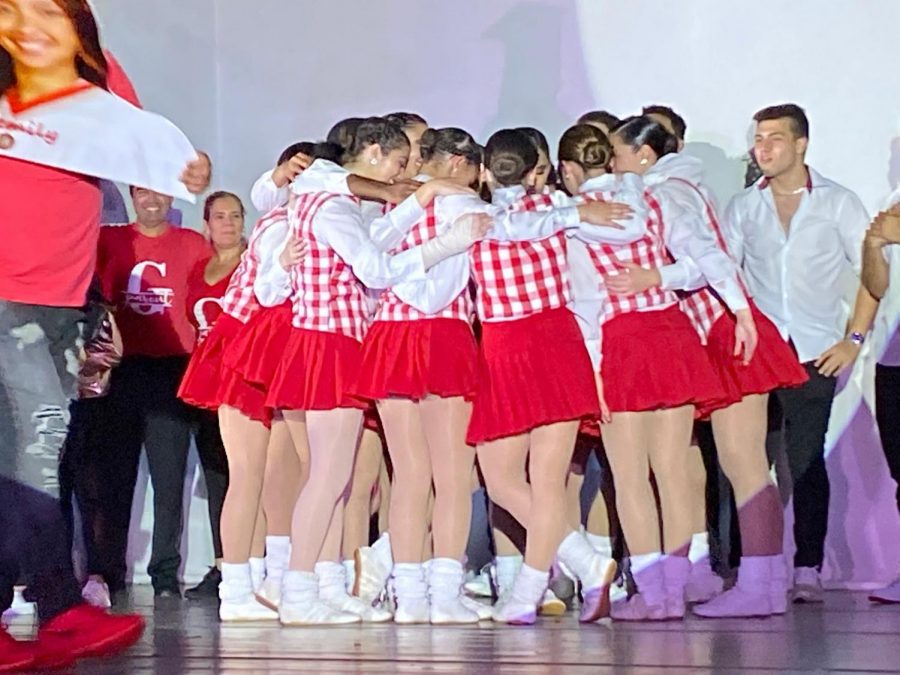 The Gablettes’ win brought them closer to each other than ever as the team became national champions.

One of the most renowned features of Coral Gables Senior High’s culture, the checkered vest uniform of the Gablettes dance team, is instantly recognizable. While they may have not been able to make much of an appearance on campus, the Gablettes did not stop working this year until they achieved their dreams of becoming national champions.

The Gablettes began the start of the school year by focusing on their techniques and rehearsing routines in preparation for performances. Next, they learned competition routines, which they spent the year perfecting for regional and national competitions. The team prepared a Varsity Kick routine to “Come Sail Away” by Styx, a Junior Varsity Kick routine to “Geronimo” by Sheppard and a Varsity Jazz routine to “Belong” by the Cary Brothers. With practices running until 6 p.m. every day, they spent all their time cleaning and running routines.

The Gablettes prepared for two regional competitions, the first hosted by the Universal Dance Association and the second by the National Dance Alliance. Concerns were shared about the latter, as NDA is more competitive in the kick realm. However, their doubts were quelled when the team placed first overall in Varsity and JV Kick and earned second place overall for Varsity Jazz.

Then came the preparation for nationals. At the time, the dancers had just been invited to perform at “Dancing Under the Stars,” an event held by Gablette alumni to celebrate 45 years of Gablette traditions. The team was asked to learn up to 10 new dances while still preparing for nationals. This included a new dance they were planning on using in competition — a Junior Varsity Jazz dance to “Toxic” by 2WEI. Practices ran until 8 p.m., and some were even held on Saturdays and Sundays.

To lift the spirit of the exhausted dancers, the dedicated coaches and officers made it their mission to continue to inspire the team. They shared reaction videos of past Gablettes winning nationals and to serve as an inspiration and a reminder of their shared goal.

Seniors also took it upon themselves to make practices a time for motivation, never once complaining about conditioning or rerunning dances. They set an example that gave the rest of the team something to look up to and work towards.

“This year was different than most given the circumstances due to COVID-19, but personally what kept me pushing through our long 8 hour practices was the energy that everyone had. This year’s team was definitely the most motivated team I have been a part of and I believe that the dedication that we had this year was what gave us the opportunity to be so successful,” junior Katrina Carpintero said.

However, just as they were growing confident in their work, the team faced a major setback. Two weeks before the date the Gablettes had to perform for preliminaries, the team was quarantined. With so much practice to get done in such little time, this obstacle made preparation much harder.

In addition to the quarantine, one member on the team who was in both Varsity dances had an accident and was deemed unable to dance for three to four months. This meant that some dancers on the team had to completely relearn the two-minute dance two days before recording since that was when they got back from quarantine. Furthermore, the member who had Coronavirus at the time was unable to participate in competitions, which required Junior Varsity Kick and Jazz to also be redone.

The Gablettes were stressed as they went into preliminaries, having just redone all their dances two days before recording time, but held their head up high the best they could. Nonetheless, the performances went smoothly; there was no telling that anything had changed recently.

Varsity Kick was awarded first place for preliminaries, JV Kick was second, Varsity Jazz was 10th and JV Jazz was second. Being so close to the top pushed the Gablettes through their soreness, fatigue and pain.

Next was the recording for nationals. More determined than ever, the Gablettes came into recording day hyped and excited. This was the day they were preparing for all year. They recorded every dance once each to not tire out the dancers. The waiting game for results was gruesome, taking over a week for final placements to be announced.

At a Sunday practice, they were caught by surprise with early results and were given the best news they had received all year: their Varsity Kick piece placed first overall, granting them the title of national champions. Watching the awards ceremony together virtually, the team was overjoyed and very emotional about winning this distinction again, the last time being in 2015.

“Seeing everyone’s reaction to our team winning a national championship title was the greatest reminder of why we spend the year doing what we do. The feeling of winning at such a high rank is unlike any other, and I am more than ready to work towards it again for next year. Now, I am excited for auditions to meet dancers who are willing to work just as hard,” Gablette Coach Erika Diaz said.

The Gablettes are now preparing for auditions and are very excited to meet next year’s team. They have big shoes to fill, as the team is set on keeping the title of national champions.