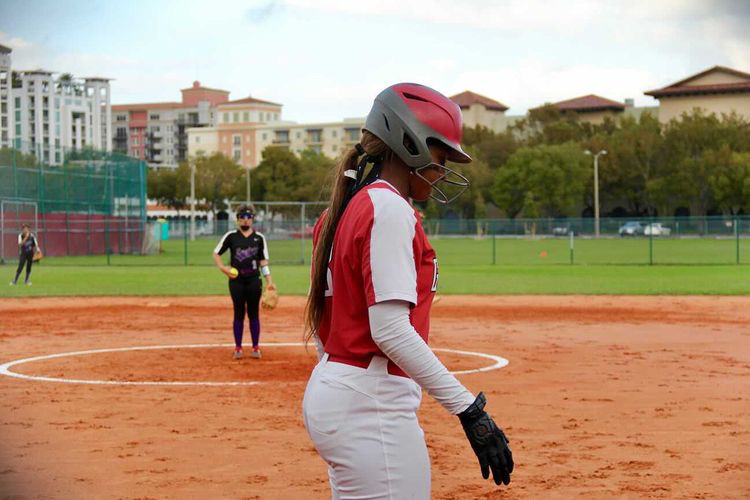 On Feb.23, the Lady Cavaliers had their first official game of the season against the Southwest Eagles at the gables' softball field.

After the season was cut short last year due to the Coronavirus for the Lady Cavaliers Softball team, they are all ready to have a fresh start moving forward. Heading into the 2020-2021 season, It is currently unknown just how many games the Lady Cavaliers will have due to COVID-19 uncertainties. But for the ones they are competing in, they plan to pick up right where they left off.

Last year, many veteran seniors graduated from the team, leaving them with a gap of players they needed to fill. Tryouts were on Jan. 11 afterschool on our school’s softball field, where they typically practiced. Unfortunately, not enough girls showed up to make an entire team at first which was a huge blow to the roster. Despite this, they held practices anyway just in case more girls were interested in the future. Luckily, over time they were able to accumulate enough players for an entire team, locking in a total of 15 players.

Practices consist of conditioning and practicing the fundamentals of softball, some of which focused on conditioning to whip the Lady Cavaliers back into game shape. The conditioning helps the girls play at the top of their game throughout the seven grueling innings. The rest focus on critical components to the sport such as catching, throwing, fielding and hitting. One example of how they practice the fundamentals is that Coach de la Vega will hit softballs to the girls in a variety of ways, such as highballs and grounders. The girls then have to catch the softball and throw it back to the coach. This helps the girls with their overall fielding skills such as their accuracy in catching and throwing.

After practicing for almost a month prior to the season, it was finally time for their first game. The Lady Cavaliers faced off against the Miami Beach Tides on Feb. 17. The team was very nervous at first since it would be their first ever game together. Luckily, it was a home game which gave them an edge. The Lady Cavaliers were triumphant with a total score of 19-9. Thanks to their pitcher Julia Kay, they were able to shut down the other team and gain a large lead. It was a great feeling to know that all of their hard work to that point had paid off and that they would all go home cheering and smiling.

“I was really proud of our win since it showed that all of our hard work paid off. I was especially proud of our pitcher, Julia Kay, who pitched a phenomenal game,“ sophomore Sofia Rodriguez said.

Their next game was the following day against the Ferguson Falcons at the Falcons field. They knew it would be a challenging game, but they kept their heads high after coming off an outstanding victory the day prior. However, after a rough seven innings, they lost with a total of 20-5. Although the outcome was not one they expected heading into the game, they plan to improve their skills in practice to ensure a loss like this never occurs again.

Having a slow but steady start, the Lady Cavaliers are ready to compete for the rest of the 2021 season. They will continue to practice every day after school from 2-5 p.m. to enhance their skills on the field. Their next game is Feb. 23 against the Southwest Eagles at the Coral Gables home field.