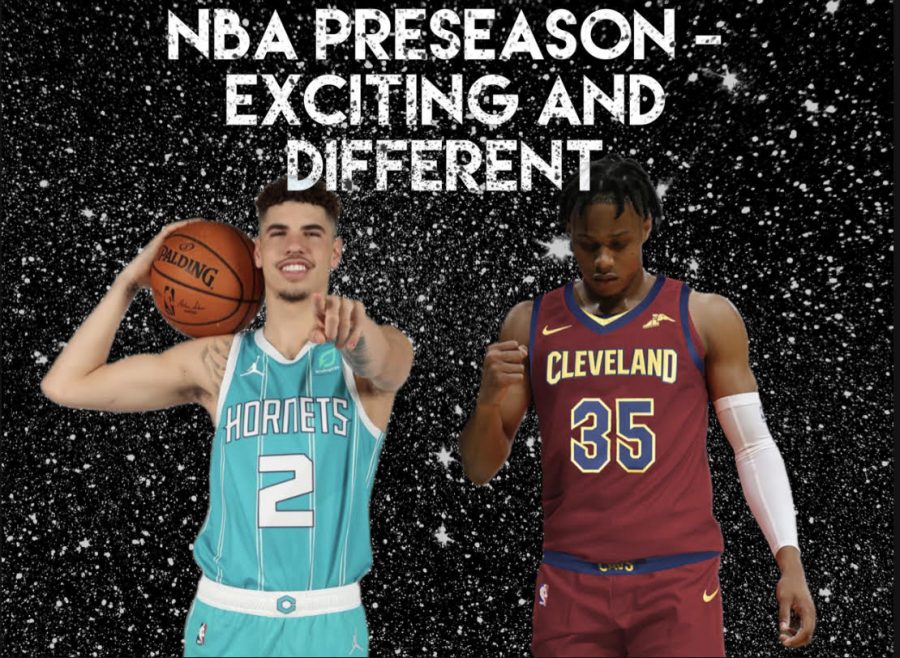 This preseason has started off in the midst of the pandemic, yet it has been exciting with notable rookies such as LoMelo Ball and Isaac Okoro

Since the end of the National Basketball Association 2019-2020 season, fans have wondered how the NBA will return to the regular session without the use of a “bubble”, which was used in the ladder-half of last year to limit COVID-19 contaminations. The NBA has decided to start the preseason following COVID-19 protocols, meaning there will be no fans, limited travel and teams will have the option of requesting three or four games. Each team will be enforced to host at least one home game and there will be a daily testing of players and staff league wide. The biggest change of this season is that it will be considered a lock-out year where there will be only seventy-two regular-season games opposed to the usual 82.

the NBA has also postponed the NBA All-Star festivities from Feb. 12, 2021, to Feb. 16, 2024. Also, the popular franchise known as the Toronto Raptors will also begin their games in Tampa Florida due to the banning of sporting events in Toronto Canada due to the Canadian Government taking precaution to Covid-19. it is currently unknown how the NBA will structure their playoff games this season but It is believed if the pandemic is not over by the end of the regular season, they will reinstate the bubble to prevent further contamination and spreading of the virus.

Moving on to the upcoming new faces of the league however, the 2020 rookie class draft has gone underway without a problem up to this point in the season as the rookies that have been drafted are currently playing their first few games relatively with ease as they make one of the toughest transitions in all of sports since they had no training-camp and missed the majority of their final season while in college.

LaMelo Ball, the third in the Ball NBA family, was No. 3 overall pick in the Nov. 2020 draft. He was signed to the Charlotte Hornets and debuted on Dec. 12. He missed all five of his field goal attempts, grabbed 10 rebounds and assisted 4 times in 16 minutes, creating for a memorable debut. He played with exhilarating pace, played physically with other players and kept his head up looking for perfect passing opportunities. He was also able to easily grab defensive rebounds and begin an effective fastbreak multiple times. However, his poor shooting was a cause for concern. Yet, Ball managed to have an expected solid debut given the circumstances.

“LaMelo looks like he will evolve into a well known NBA player. He is the third brother and has a ton of experience. I think he will become near the same level or even better than his brothers,” sophomore Luis Tobar said.

Another rookie who debuted this preseason was Isacc Okoro. As the No. 5 overall pick to the Cleveland Cavaliers, Okoro scored 18 points, going six for nine from the field, making two out of his four three pointers. Okoro managed three steals, one assist and one rebound. Okoro as well managed to score the game winning shot.

It was also recently revealed Giannis Antetokounmpo signed a five-year contract extension with the Milwaukee Bucks for $228.2 million, which is the largest deal in NBA history. In Giannis’s preseason debut game, he managed to put up 25 points in 24 minutes, which was an impressive feat. Stephen Curry also debuted that same day against the Detroit Pistons making it his first NBA game in nine months. Steph was not at his prime as he only scored 10 points, going 3 for 10 from the field and just went 2 to 7 from the three point line. It is understandable why Steph was having a rough-patch performance as he played only five games after breaking his left hand last season.

“It is quite insane to think about how Giannis managed to get the most expensive deal in NBA history and how he is becoming one of the best power forwards in the league,” sophomore Carlos Rocha said.

The 2020-2021 NBA season has just begun, but it is already full of exciting new rookies and regular players returning after the end of the playoffs to play some exciting basketball. Although there is no bubble, the NBA is handling the COVID-19 pandemic in a very serious manner that allows for the safe continuation of the season for both their staff and their players on and off the courts.