Who Truly is the Greatest Athlete in Sports? 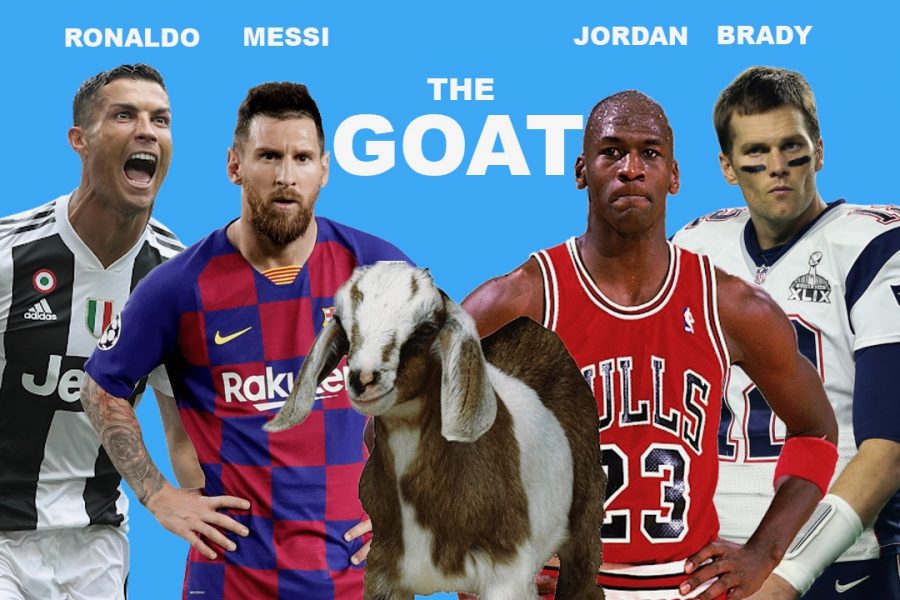 The question on who is the greatest of all time is one that runs through the mind of every sports fan. Whether it's Michael Jordan, Tom Brady or even Lionel Messi, there is no doubt that they all deserve a spot in this conversation

An often heated discussion in every sport is “who is the Greatest of All Time?” Each sport holds multiple potential candidates who are worthy to be in the discussion due to their impressive careers regarding statistics or team achievements. Regardless, there can only be one GOAT and it is not an argument that can be easily settled between avid fans.

Football: Tom Brady
Tom Brady is considered the GOAT of American Football, winning seven Super Bowls throughout his 21-year-long career. Brady has been completely dominant, proving that age is nothing more than a number. Brady signed with the Tampa Bay Buccaneers in an unexpected two-year contract on March 20, 2020. Brady then won his seventh ring in his first season with the Buccaneers, proving his greatness at the age of 43. Brady holds the most playoff wins for any player, recently knocking Kansas Chiefs out of the park in Super Bowl LV while also winning his fourth Super Bowl Most Valuable Player award through the process. The records that Brady holds and continues to break throughout his career are a testament to not just how great he is, but why he is the GOAT of American Football.

Soccer: Messi and Ronaldo Debate
The Messi and Ronaldo debate has been a constant back and forth for more than a decade as these two amazing players have gained a significant amount of goals, assists and trophies throughout their careers. Messi has the most Ballon D’or, six to date, while Ronaldo is slightly behind with five. This tally sets them head and shoulders above all other soccer players, who have only been able to individually obtain three Ballon D’or. Messi and Ronaldo have also been able to win multiple Champions League trophies, multiple league trophies and have competed to be top scorer in these competitions, with each player being top scorer multiple times.

Between the two amazing players, Messi edges the GOAT debate considering his statistics. He has averaged either a goal or assist per game over the entirety of his seventeen-year career. Not to discredit Ronaldo, he has also scored or assisted an impressive amount of goals, even being the current top scorer of the world. Messi has to be considered the GOAT as he is also far younger than Ronaldo, despite competing and often beating his all-time statistics. His better statistics in the game as well as in trophies show that Lionel Messi has to be the GOAT of soccer.

“I believe Messi is the true GOAT of soccer as he is simply an artist with the ball, creating chances left and right, while scoring amazing goals. Everything he does is simply amazing,” sophomore Nathaniel Leiva said.

Basketball: Michael Jordan
Micheal Jordan is the indisputable GOAT of basketball, winning six National Basketball Association Championships, six NBA Finals Most Valuable Player awards and he even started an extremely successful shoe brand, uniting fans from around the world. Jordan has become a global icon in the basketball media, carrying the Chicago Bulls to six championships and winning five MVP awards. Jordan is considered a great defensive player and the best offensive player, with his ability to dunk and block out opposing players with ease. Jordan won three championships in a row before retiring to play Baseball. After returning, he once again secured three championships in a row. Jordan, throughout his career, averaged 36 points, six rebounds and five assists per game as a Shooting Guard. Jordan’s extensive catalog of awards and championship wins simply proves he is the GOAT of basketball.

“Micheal Jordan is the obvious GOAT because he was able to secure two three-peats, which is already a difficult task to do. He also created the shoe brand and is and a hands-down GOAT,” sophomore Edghlys Lopez said.

Swimming: Michael Phelps
Prior to retiring in 2016, Michael Phelps became the most decorated Olympian to date, amassing 28 medals over the course of his 16-year career, which started when he qualified for the Olympics at just fifteen years of age. He holds multiple world records, including most Olympic gold medals for any individual and the men’s 400-meter individual medley. In the 2008 Olympics, Phelps won a record eight gold medals, a career total of 14 at the time, which smashed swimmer Mark Spitz’s 1972 record of seven gold medals. This cemented Phelp’s reputation in swimming, but doubling his medals means that no Olympian comes close to his record and makes sure no one can possibly debate his status as the GOAT of swimming.