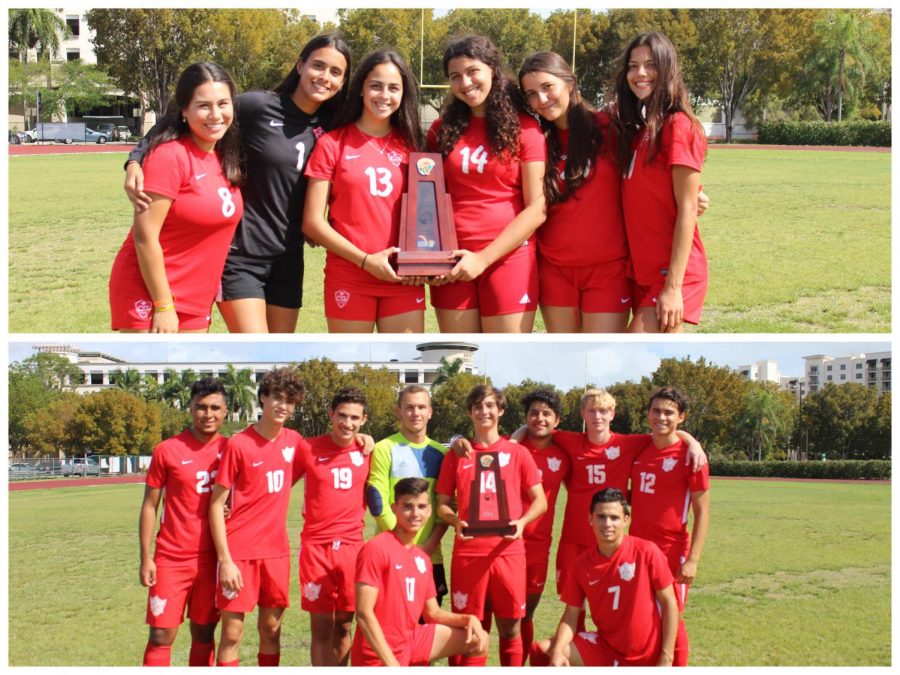 After tough losses in the 2019 district competition, the Cavalier and Lady Cavalier soccer teams bring Gables the district title together for the first time since 1981.

During the 2019 winter soccer season, both the girls’ and boys’ varsity soccer teams had outstanding campaigns where both the Cavaliers and Lady Cavaliers had a shot at the district champion title. Unfortunately, neither team was able to prevail and bring the title to Coral Gables Senior High, with the Lady Cav falling to Lourdes High School, and the boys falling to Columbus High. After the tough losses that year, both teams went into the 2020 district finals in a quest for vengeance.

When game day arrived, the Lady Cavaliers, behind Coach Justin Aguirre’s strategies and Captain Juliana Bonavita’s leadership, used all of their training, experience and determination to pull off a victory against Braddock, scoring seven goals to Braddock’s two, making this the first time the Lady Cavaliers have been crowned district champions since 2011.

The day after the Lady Cavaliers captured their title, the boys’ soccer team matched up against long-time rival, Columbus High School, for a chance to be district champions.

The boys ended up going all in, coming out on top with a score of 4-1, making it the first time since 1981 that both the girls and boys soccer teams have won district titles in the same year.

After just barely missing their shot at the 2019 district title, the Lady Cavaliers put in extra work during the offseason to make sure they would not come up short the next time they got their opportunity. Just as expected, their hard work paid off as they had themselves an undefeated record heading into the playoffs, where they would meet Braddock High in the district championship game.

The Lady Cavaliers started the game strong as they were able to break down Braddock’s defense and score a goal within the first five minutes of the intense contest. The Lady Cavaliers were successfully able to stop the Lady Bulldogs multiple times and capitalized on their weak defense by scoring two more goals on breakthroughs.

Braddock’s game plan was to play a huge back line in hopes of activating the off-side traps, which was easily exploited by the Lady Cavaliers, allowing them to score three more goals before the half closed, giving the Lady Cavaliers a commanding 6-0 lead.

Beginning the second half of the game, Braddock did manage to score a goal off of a miscommunication between the goalkeeper and the defensive line. To no avail, it was quickly met with another goal by the Lady Cavaliers, which brought the score to 7-1.

Soon after, Braddock scored another goal off of a free kick outside of the goal box. The Lady Cavaliers did manage to play amazing defense the rest of the way, which solidified their 7-2 victory and a district championship, much to the delight of the seniors in particular as they get to conclude their high school athletic careers with some hardware.

Coming into the game, the boys’ soccer team knew what was at stake; not only did they have a district championship on the line but, if they were to lose, it would have been the second time in a row that they surrender the trophy to the same opponent. They managed to dominate to the regular season, boasting an undefeated record, thanks to their incredible work ethic. However, they still had to go through the formidable Columbus Explorers one final time before celebrating their success. Once the game started, the Cavaliers came out extremely poised and focused. Sophomore Etienne Montigny led the charge early, driving the ball into the net for the Cavaliers’ first goal.

The Cavaliers’ early confidence boost ignited them to play one of their best defensive halves of the entire season, leaving the Explorers scoreless through the first half. Meanwhile, the Cavaliers continued to dominate on the offensive side of the ball as well, as their second goal came from Kevin Espinoza.

To end the half, Daniel Guzman netted another one, giving the Cavaliers their third goal of the half as they began to run away with the game.

“Our team was very focused and we were dying to win this game. Everyone was ready to battle against Columbus and be able to show them who we are. As soon as the game started, we gave them our 100% effort,” senior Kevin Espinoza said.

Entering the second half of the game, the Cavaliers continued to apply constant pressure on both sides of the field. Eventually, the monster within the Explorers awoke, as they were able to score a goal.

Unfortunately for Columbus, that moment was short lived. Etienne Montigny scored his second goal of the game, bringing the score to 4-1, extending the Cavalier lead by a definitive three goals.  With that, The Cavalier Soccer team’s dream season was complete, as they took down their greatest rival and brought the district championship soccer to title to Gables.

Overall, after suffering district finals losses in the previous season, both Cavalier soccer teams were motivated to get it done this time around. The drills were more intense and every Cavalier knew the expectations coming into the season, and they were not going to be settling for less.

Carrying that attitude this season with them is what allowed both soccer teams to make history and win their respective district titles together for the first time in nearly 40 years. The Cavaliers understand that their work is still not finished, as both teams move on to compete in the regional semi-finals to take on the best teams in the district.