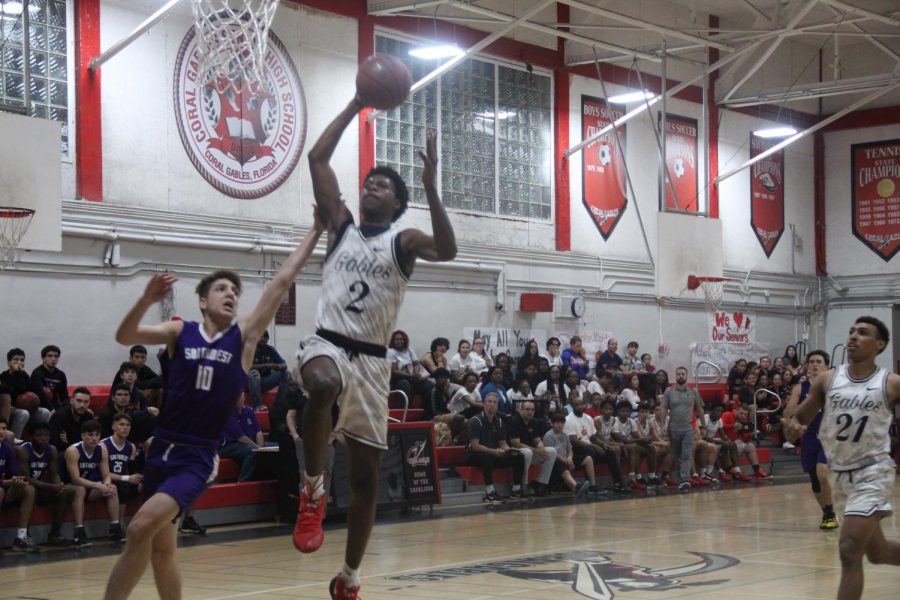 Cavalier Jimel Lane rises up for an emphatic dunk against the Southwest Eagles as the Coral Gables Cavaliers defeat the Eagles 83-63 during their last regular season home game on Jan. 29.

With the Cavalier basketball season coming to an end, the boys’ varsity basketball team played their final home game on Tuesday, Jan.29, against the Southwest Eagles at 7:30 P.M. Fans from both schools swarmed the Cavalier gym and, with the intensity rising, both teams could not wait to step foot on the floor.

Once the game began, the Cavaliers found themselves down 14-13 early. However, thanks to some great defensive stops, the Cavaliers were able to turn the Eagles’ turnovers into easy points down the other end, giving them an 18-14 advantage to end the quarter.

The Cavaliers kept their momentum going to start the second quarter by doing what they do best: getting out in transition and getting easy buckets on the Eagles’ lackluster defense. By this point, the crowd was going insane, which was only fueling the Cavaliers’ effort as they easily out-boarded their opponents by six in the second quarter alone, opening the door to multiple putback attempts and free throw opportunities. At the end of the half, the Cavaliers had a score of 40 to the Eagles’ 28.

“I think what won us the game was the fact that everybody was playing for each other and we felt comfortable and trusted one another to make plays when it mattered most,” sophomore Romulo Gonzalez said.

Starting the second half, the Eagles found trouble getting the ball up court as the Cavaliers ‘pressure on defense caused havoc and left the Eagles in disarray to gain momentum and make a comeback. By this point. the press was working wonders as the Cavaliers continued to force turnovers and were able to get out in transition and make some nice highlight dunks to really solidify the momentum for the Cavaliers and the home crowd, leaving the score at 60-41 to end the third.

The fourth quarter carried the same momentum that the Cavaliers built throughout the game. Forcing easy turnovers and making highlight plays down the other end really sums up the type of game it was for the Cavaliers, as they could do no wrong.

As the home crowd sensed that victory was imminent, they began chanting “Let’s go, Gables,” only spurring the Cavaliers during the final few minutes. With the score being 78-56 with less than three minutes to go, the game was already a lock and the Cavaliers prepared to celebrate. As the last seconds dwindled from the scoreboard, the Cavaliers had won the game with a final score of 83-63.

“Although this was the final regular season game, this was also senior night and I feel like with this win on our home floor, there was no better way to send off our seniors,” sophomore Chase Weiner said.

Despite the end of the regular season this is definitely not the end. With a record of 17-3, the Cavaliers are expecting to have a great playoff run and hopefully bring home some hardware in the form of a district championship in the near future.