Athlete of the Week: February Edition 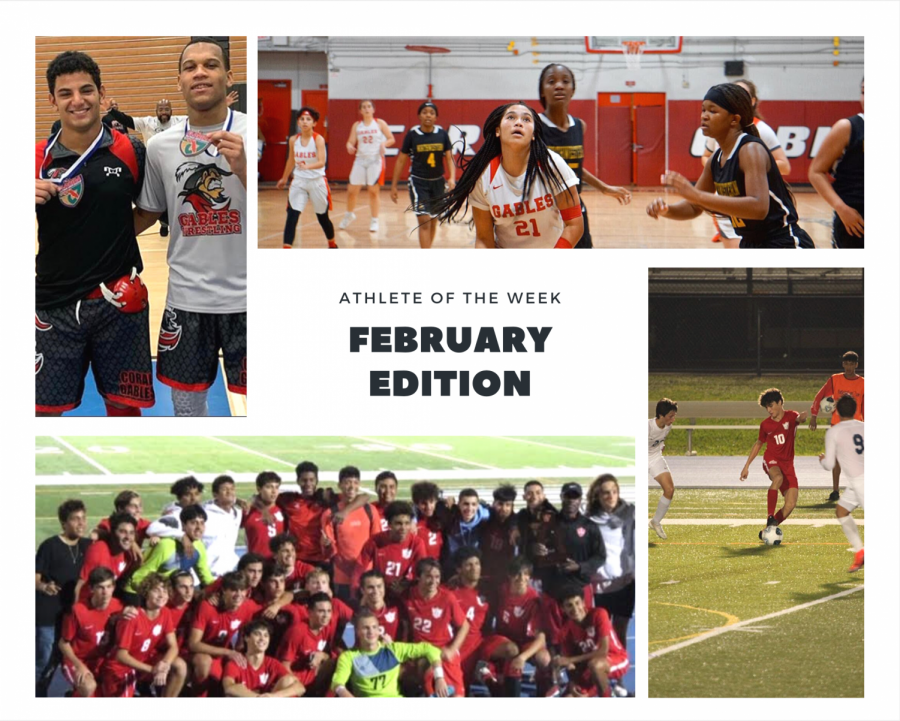 The February Athletes of the Month features a stacked amount of talent from athletes who wrestle, play soccer and basketball during the spring sports season.

With the temperatures heating up, the Cavalier athletes refuse to slow down.  Winter sports seasons are officially over, and it is not difficult to see the growth of various athletes across the sports of soccer, basketball and wrestling from early November to now

Both the boys’ and girls’ soccer teams won their respective district championship titles for the first time since 1981. Several wrestlers also qualified and advanced to the Regional Wrestling Tournament. The Lady Cavalier Basketball team led an extremely strong season. Overall, the Cavaliers came up big when they were down for the count. Below are the Athletes of the Week for the month of February, where records were made and goals accomplished.

Sophomore Thais Forbes has been playing basketball since she was in middle school, when she played for the Sun’s Amateur Athletic Union (AAU) team. She decided that she wanted to join the Lady Cavalier Basketball team at Coral Gables thinking that it was a great way to get better at the sport and make some new friends.

Over the course of two games during the week, Forbes averaged a team-high 18.5 points along with five boards, lifting her basketball team to a .500 record for the week.

Week of Feb. 9- Feb. 16: Cavalier Boys & Girls Soccer
Boys’ Soccer
The boys’ soccer team faced off against their long-time rival, Columbus High School, for a chance to become the 2019-2020 district champions. The Cavaliers have had a very successful season, winning all of their games leading up to the district championship match.

The boys ended up going all in, coming out on top with a score of 4-1. The Cavalier Soccer team has worked extremely hard all season and have shown nothing but resilience and a winning mentality. Nothing could have been more rewarding than accomplishing the massive feat of becoming the soccer district champions.

“Every year, we push each other to be the best athletes and teammates that we can be, and in the process we become better friends. The games were very intense and we all worked hard, never giving up during any game that we played,” senior Jason Wood said.
Girls’ Soccer

On Feb. 5, the Lady Cavalier soccer team took on Braddock High School in a suspenseful game that would decide who would be crowned the 2020 district champion.

Braddock scored a goal off of a free kick, just outside of the goal box, to start the contest off with an edge. However, the Lady Cavaliers managed to play brick-wall-defense the rest of the way, solidifying their 7-2 victory and securing the 2020 girls’ soccer district championship after a marvelous season.

The Lady Cavaliers won the championship for the first time since 2010, which is a delight to the seniors in particular as they get to graduate from their high school experience with the district championship title to look back on.

Nuñez found his passion for soccer when he was around four years old, having been heavily influenced by his dad’s side of the family. When he entered high school, he decided to join the soccer team so that he could mean something to the school aside from just being a standout student.

In his final season, Nuñez was looking forward to winning the district championship. Lucky for Nuñez, he was able to lead the Cavalier soccer team to victory during the 2020 winter soccer season.

“My favorite part of being on the team has been the opportunities that I was given as a leader during my last two years. To influence incoming freshmen and sophomore players on and off the field has been a gift,” senior Manuel Nuñez said.

Although Nuñez missed a pair of games due to injury, he was able to bounce back and assist the team in several goals that eventually helped to pave their way to District Championship Finals and Regional Championship Semi-finals.

During their regional competition, Nuñez scored a goal within the last 18 seconds of the game, pushing the game into overtime. Unfortunately, the team lost that competition 2-1 points to Cypress Bay.

As captain, Nuñez has learned the importance of maintaining focus during practice and making sure that all of the players are on the same page in order to perform better as a whole team, and win as a team.

Senior Sebastian Rodriguez had an impressive outing during the district wrestling tournament. On his first day, he was able to pin his opponent in just three quarters. His second match also went well, where he managed to pin his component  in under 47 seconds, allowing him to move onto the second day of the tournament.

During the second day, Rodriguez won the match that earned him third place, as well as a spot at the state championship competition alongside his teammate junior Jose Cardenas.

Cardenas made his way into the fourth and third place matches and he was able to take down Cypress Bay’s participant to earn third place for the regional tournament, where he watched his hard work and perseverance lead him and his teammates to victory.

Clarance Eldor was one of the four Cavalier athletes to qualify for the district matches. Unfortunately, he was eliminated in the third round of the tournament and his wrestling season ended.

William Evelyn also qualified for the District matches, but he, too, was disqualified in the second round of the tournament.

Although it was disappointing for the two, Eldor and Evelyn were proud of each other and understand that they are capable of returning to the mat even stronger next year.

Even though it can be extremely difficult to be a student-athlete, many of these athletes have gone above and beyond to show their heart and resilience, whether it be on the field, the mat or the court. If you see them around campus, be sure to congratulate them all for their exceptional accomplishments