Balling Out and Showing Up: Lady Cavalier Basketball 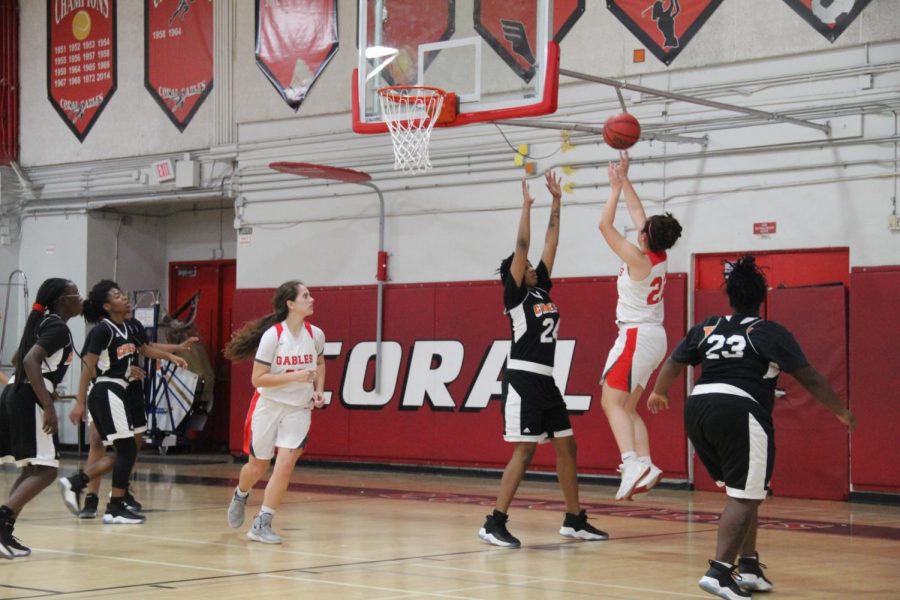 After a refreshing winter break, the Lady Cavalier Basketball team has returned and is ready to continue dominating the basketball court. The Lady Cavs continue to practice every day after school in the Gables gym in hopes that they will be well-prepared to take down anyone that stands in their way and become this year’s 2020 district champions.

The girls’ varsity team’s first game of the new year went down on Jan. 6, the first day back from winter break, against the Ronald W. Reagan Doral Senior High School Bisons on the Bisons’ home court. The Bisons were no match for the Lady Cavs as they kept the Bisons at bay throughout most of the game. At times, it seemed like the Bisons had what it took to take down the Cavs. However, they were on a determined path and kept the Bisons in check, winning by a decisive score of 57-37.

Later that week, on Jan. 10, the varsity squad competed against the Miami Beach Senior High School Hi-Tides on their home court. They started the game off on a high note and never toned it down, finishing with a total score of 62-24 in the Cavaliers’ favor. Fans were roaring throughout the whole game, clapping and screaming as the Lady Cavaliers scored basket after basket in a dominant outing.

The Lady Cavalier varsity team hoped to continue their hot streak, but on Jan. 13, they were unfortunately defeated by the Miami Senior High School Stingarees. This game took place on the Stingarees’ home court and ended with a total of 84-22. Although this was a tough loss for the team, they worked to learn from this loss and improve their passing skills and endurance to ensure that their team was in pristine condition.

The junior varsity team had their first game of the new year as well, also taking on the Miami Senior High School Stingarees. Unfortunately, the Lady Cavaliers took a devastating loss, scoring just 15 points while allowing their opponent to net 68 points. Even though the loss was a frustrating one, they brushed off the frustrating game and practiced to improve their skills and build good habits.

On Jan. 15, the varsity team suffered another tough loss against the Southwest Miami Senior High School Eagles. The crowd was on the edge of their seats throughout the whole game, eagerly watching to see who would end up victorious. By the end of the fourth quarter, the game was tied, and the Lady Cavs found themselves playing in overtime. Unfortunately, they were no match for the Eagles in crunch time as they lost 50-46.

“Although it has been a tough season we continue to keep on pushing and we are definitely going to beat Southwest when we play them again at districts,” said Coach Mena.

The junior varsity squad also competed that same night against the Southwest Miami Senior High School Eagles. The game was a complete blowout as the Lady Cavs  handed the Eagles a 52-11 loss. The crowd was cheering nonstop for the Lady Cavs, who drained shot after shot and forced turnovers left and right. Freshman Audrey Simon led the game with a total of 19 points, a season-high for her. Sophomore Nicole Martinez followed up with a total of 14 points, and never missed a single one of her shots.

It has been a roller coaster of emotions for the Lady Cavaliers, with highs and lows that seem to crush them and build them right back up again. With only a few games left in the winter sports season, the Lady Cavaliers are looking to finish strong. As for the seniors on the team, they look to continue leaving their mark on the basketball court as their time on the team is quickly running out. Until then, be sure to root for your Lady Cavalier Basketball team as they look to finish their season strong with a potential district championship awaiting them