The Future is Bright in the 305 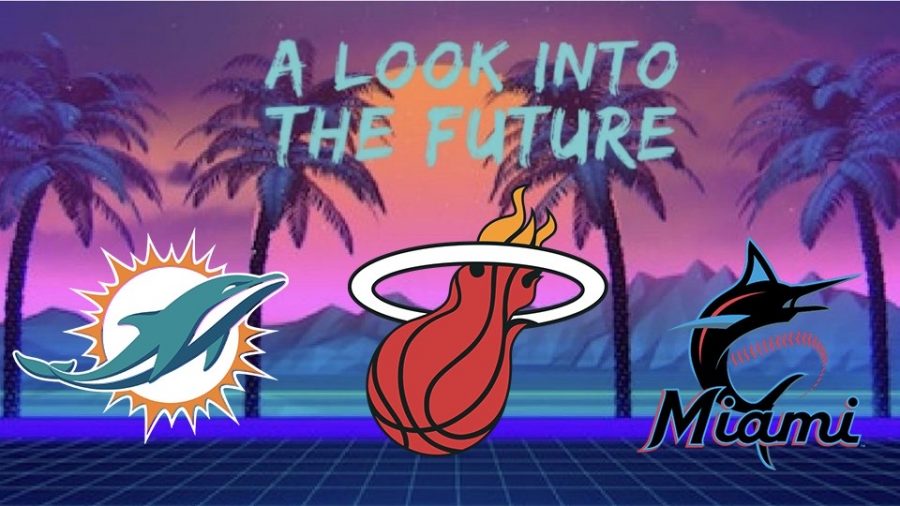 With the new decade beginning, the Miami Heat, Marlins and Dolphins have an abundance of young, elite prospects, in combination with multiple draft picks and salary cap space. This leaves Miami sports in an extremely fortunate situation which will likely result in them contending for years to come.

After a decade-long tenure of success, Miami sports are still in a position of success, entering the 2020s with arguably the brightest future for all three of their major sports, including basketball, baseball and football. These claims can easily be backed up with just the absurd amount of young talent, financial flexibility and overall roster potential that each of these teams possess. As sunny South Florida awaits its time of glory, let me explain how Miami sports will dominate the 2020’s.

The Miami Heat were nothing special in the National Basketball Association (NBA) in 2019, as they had the fourth largest payroll in the entire league and had just missed the postseason for the third time in five seasons. Understanding that changes had to be made, President Pat Riley made a number of moves, which included drafting a promising 19-year-old guard out of Kentucky, Tyler Herro, with their 13th overall pick in the 2019 NBA draft.

Miami also shipped promising two-guard Josh Richardson in a deal that would see the Heat obtain superstar Jimmy Butler. Riley would not stop there as he also scouted a 24-year-old prospect in the Golden State Warriors’ Gatorade-League affiliate by the name of Kendrick Nunn. Closing off the off-season, one last deal was made sending big-man Hassan Whiteside to the Portland Trailblazers for Meyers Leonard, leaving the starting center spot open for 22-year-old Bam Adebayo.

In the midst of the 2019-2020 NBA season, in their first 36 games the Miami Heat are 26-10 and stand third in the heavily competitive Eastern Conference. Every new addition is flourishing with the stellar play of the two young guards, Herro, Nunn and, not to mention, the Most Improved Player (MIP) candidate himself, Bam Adebayo. The Miami Heat have put themselves in a position to compete while remaining incredibly young.

Since most of the Heat’s key assets are either on reasonable salaries or still on their rookie contracts, the Miami Heat are expected to have max level salary cap in the 2022 offseason to potentially secure another big-name star to play alongside their incredible core. In just one offseason, Pat Riley managed to set up the Heat for another potential dynasty lasting until the middle-to-late 2020s.

“I believe our city is in a great position to make great runs for a title in the near future. I am excited for what the future holds,” sophomore Pablo Velazquez said.

The Miami Marlins have been at the helm of mediocrity for the last two decades. After the passing of their superstar pitcher, Jose Fernandez, in 2016, the team decided it would be best to finally commit to a complete rebuild.

The first change came at the top, which saw Jeffrey Loria sell the team to current owner Bruce Sherman and give Derek Jeter the Chief Executive Officer (CEO) Position.

Under new management, Jeter first acts as an executive consisted of  trading away star players, such as Giancarlos Stanton, Christian Yelich and Marcell Ozuna, along with other notable players. In return they received 12 prospects, with some being young pitchers like Sandy Alcantara, Jordan Yamamoto and Zac Gallen, along with promising bats such as Isan Diaz and Monte Harrison.

Skip forward two seasons into the rebuild and the Marlins just finished the 2019 season with the third worst record in Major League Baseball (MLB). However, they have one of the most promising abundances of young talent.

After recently being given the title “most improved farm system” by Major League Baseball, it is not hard to see where they are coming from as the Marlins have five Top 100 prospects and a youthful, potent team at the Major League level. Not to mention, the Marlins have one of the lowest payrolls in the entire league, opening the door to many free agent possibilities in the near future. Needless to say, the future of the Marlins looks incredibly bright and lined up for many future playoff runs.

“I feel like our teams are extremely underrated. Although it may not seem like Miami’s teams are elite when looking from the outside in, Miami fans can truly see just how bright these teams’ futures really are,” sophomore Jacob Diaz said.

Just like the Marlins, the Miami Dolphins have been searching for their identity for nearly an entire decade. With one of the most shifting coaching staffs and lowest attendance rates, a restart to the franchise was a necessity.

After trading away most core pieces to the roster before the 2019 season, which included offensive tackle Laremy Tunsil and wide receiver Kenny Stills to the Houston Texans, the Dolphins were able to get a jump-start on the rebuilding process as they received two first-round draft picks for the 2020 National Football League (NFL) draft.

The Dolphins just ended their 2019 campaign with a 5-11 record: the worst in their division. With three first-round and two second-round draft picks at their disposal, the intention of adding young, future stars is evident. The Dolphins will also be serious free agent threats to add either star power or some much needed depth as they will boast upwards of $120 million this upcoming off season.

Although the hardest part of the rebuild is complete and with still so much uncertainty, one thing is for sure. The Miami Dolphins are in a position to succeed within the next season or two and will be serious threats in the NFL for years to come.

It is clear that each professional Miami sports team is in a position to succeed. With each team boasting elite young talent, roster flexibility and an immense amount of salary cap, it is not hard to see why the future of Miami sports is as bright as the Florida sun. 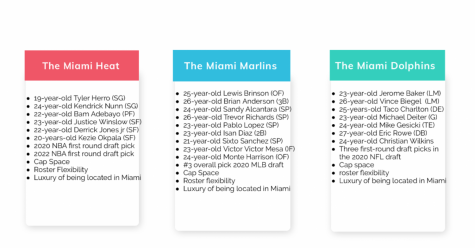 Here are each of Miami’s major sports teams and their most valuable assets going into the year 2020. With very attractive profiles, all three teams are hoping to attract big-name free agents during their respective off-seasons.