The Best Miami Sports Moments of the Decade 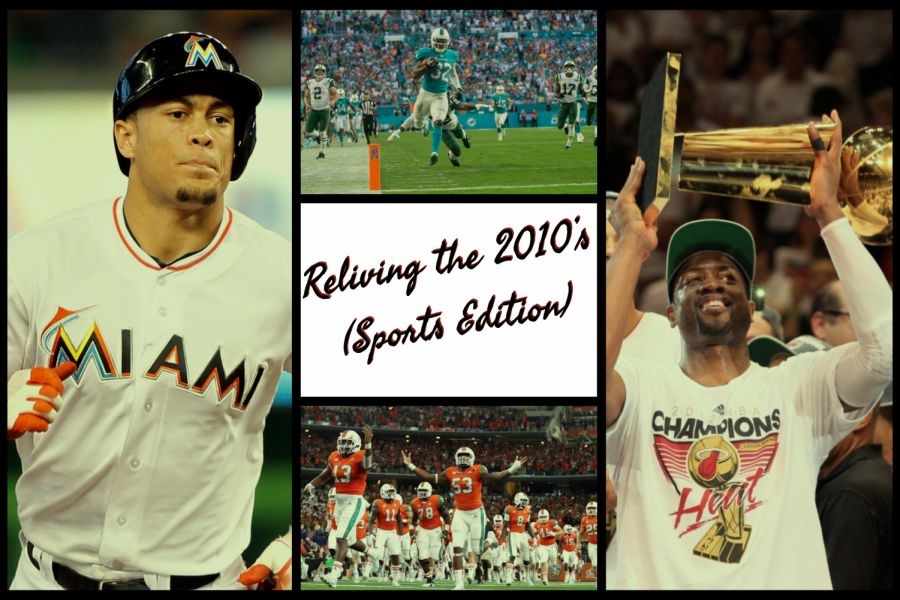 The 2010's were an eventful ten years for Miami sports. Full of passion, grit, and pure emotion, every sport had something to offer. As we close out 2019, it is time to relive every single one of them.

Looking back at all of the Miami sports moments throughout the decade, Miami sports teams have had quite the stretch. The 305 has watched Most Valuable Players (MVPs) suit up to play, legendary dynasties being established and brand new stadiums being created. Not to mention, Miami has seen some of the loudest sports stadiums ever recorded. As we count down the ten greatest sports moments of the decade, let us relive the moments that made this decade unforgettable.

Heading into the football game, the Miami Dolphins had a record of 6-6 as they took on the dominant New England Patriots, who were 9-3 at the time. There were nine total lead changes throughout the game as the Dolphins managed to keep the score close against the defending Super Bowl champions. Despite the Dolphins stellar play throughout the game, they still found themselves down 28-33 with no more than seven seconds on the clock.

On the final drive of the game, receiver Kenny Stills caught a pass from quarterback Ryan Tannehill, who then tossed a lateral to DeVante Parker. Parker was then able to pass a lateral to Kenyan Parker who was able to evade the entire Patriot defense for the game-winning touchdown as time expired, marking that day in history as the “Miami Miracle”.

In one of the most highly-anticipated college football games of the year, the Miami Hurricanes went head-to-head against the Notre Dame Fighting Irish. The Hurricanes were undefeated up to that point, starting their season off with an incredible 8-0 record, while the Fighting Irish held an impressive record of 8-1 themselves.

The game itself was a demolition for Notre Dame, finding themselves down by 27 points at the halfway point of the game, and they would be held scoreless until the early third quarter. This marquee matchup showcased the fighting spirit of the Hurricanes as they intercepted the ball three times before closing the half. In addition, Miami scored 14 more points to end the game, defeating Notre Dame definitively by a score of 41-8.

“I remember thinking that the U was back. It was the real University of Miami. It was the team that invented swagger. Unfortunately, they did not end the season well, but that memory of winning will always be remembered,” sophomore Alan Morffi said.

The summer of 2016 was a rough one for the Miami Heat as they had just lost one of their star players in Chris Bosh due to blood clots. Worsening the matter, the Heat was forced to part ways with franchise cornerstone Dwyane Wade, who ended up with his hometown team, the Chicago Bulls, in free agency.

The Miami Heat got off to a horrendous 11-30 start, but just when the entire league counted out the spirited Miami Heat, they showed up big time. With what started out as an innocent three-game win streak, Miami’s basketball team turned up the heat and, before you knew it, they threatened teams with a 13-game winning streak. Just as quickly as everything seemed to have gone wrong, the Heat were able to reverse the damage and finish the season on a 30-11 run, ending their season with a record of 41-41 led by rising players Dion Waiters, James Johnson and Tyler Johnson.

7. The Miami Dolphins Break into The Postseason (2016)

After eight long seasons of going home early, the 2016 Miami Dolphins reached the National Football League (NFL) postseason. After a lackluster 1-4 start to the season, the Dolphins would quickly claim six straight wins, finishing the season on a 9-2 run. With a Week 15 win over the New York Jets, the Dolphins managed to clinch a winning record for the first time since 2008.

What would a Top 10 Miami Sports Moments list be without America’s national sport? Miami Marlins star Giancarlo Stanton entered the 2017 campaign as a man on a mission. Despite a slow start to the 2017 Major League Baseball (MLB) season, Stanton was on fire in the second half. Stanton was hitting a homerun in what seemed to be every other game as his home run total kept rising as the season progressed. Stanton’s historic campaign ended up earning him the 2017 National League MVP award, in addition to the Hank Aaron award. His efforts also let him be first in home-run totals, total runs batted in (RBI’s) with 138, and slugging percentage with 631 in the National League.

Throughout the entire 2009-2010 NBA season, all eyes were on upcoming free agents LeBron James and Chris Bosh. The Miami Heat ended the 2009-2010 campaign with a record of 47-35  and, heading into the 2010 offseason, the Miami Heat were not expected to make any significant moves to improve their roster. But as free agency neared, executive Pat Riley worked his magic and was able to clear enough salary to become the only team able to sign three max-level free agents. Dwyane Wade and LeBron James were in constant communication with each other during this time and they considered many places to sign with, such as the Chicago Bulls and the New York Knicks. Despite those bigger markets having enough cap space to sign both of them, Miami ultimately was able to outbid them simply because they were able to bring in a big three consisting of LeBron, Wade and Bosh. The rest was history.

“This was the best possible way to start out the decade. Looking back at all the great moments over the last ten years, this was easily the most rewarding and fun team to watch, possibly ever, for me,” sophomore Kimberly Garcia said.

The Miami Heat would kick off their new era of dominance in a not-so-dominant fashion by losing to the Dallas Mavericks in six games during the 2011 National Basketball Association (NBA) Finals. This setback would be short lived as Miami was out for revenge in the upcoming season. The Heat would finish the 2012 campaign with a record of 46-20 as it was a lockdown year that season. This record earned them the second seed in the Eastern Conference, allowing them to steamroll past the Knicks and the Pacers in the first two rounds of the postseason. This left them to face off against the Boston Celtics, who would push the Heat to seven games. The Celtics were on the verge of sending the Heat home once again without a ring, but thanks to the efforts of the “Big Three”, who combined for  73 points, they triumphed over the Boston by a score of 101-83. The Heat were now off to face against the Oklahoma City Thunder. The Heat would dominate the Thunder, beating them in just five games and capturing a championship in South Beach for the first time since 2006 .

After claiming basketball royalty, the Miami Heat were determined to do it again the following year. The 2013 campaign for the Miami Heat was filled with multiple memorable moments, such as when the entire team participated in the notorious “Harlem Shake”, or when the Heat went on a 27-game win streak, trailing only the 1971-1972 Lakers’ record of 33. The Heat would finish their season with a record of 66-16 which earned them the first seed in the East. The Heat would completely tear the East apart in the postseason, easily blowing out every team, leaving them with a Finals matchup against the San Antonio Spurs. This series was one of the more memorable series of the decade as it pushed both teams to their limit, trading games back and forth until a game seven was to be played at American Airlines Arena. It was a sold out crowd, and fans were waving their “White Hot” spirit towels in support. The game came down to the final two minutes where a couple of defensive stops and clutch shots from the Heat would put the game out of reach, rising above the Spurs by a score of 95-88. After the buzzer sounded, confetti rained from the sky and fans roared as the Heat captured back to back titles.

The entire baseball world was devastated to find out that Marlin ace pitcher Jose Fernandez had passed away in a boating accident in the early morning of Sep. 25, 2016. Fernandez was a young pitching phenomenon who was taken by the Marlins as the 14th overall pick in 2011, and he quickly set the league ablaze in his rookie season where he would eventually be awarded the National League Rookie of the Year award in 2013. The Marlins commemorated Jose’s death in a game against the New York Mets where all Marlin players wore a jersey with Fernandez’s name and number At the start of the game,Dee Gordon, a left-handed hitter, was tasked with being the first Marlins batter to step up to the plate. Gordon began the at-bat hitting from the right side, however, as a tribute to Jose Fernandez. After taking a pitch, he switched back to the left. Gordon then saw a pitch he liked and turned on a 2-0 fastball, sending it into the upper deck and soaring it over Jose Fernandez’s #16 image displayed on a scoreboard. With less than six games to go that season, that marked the first homerun of the season for Dee Gordon. As he rounded the bases in tears, the entire stadium was in awe at what they had just witnessed.

“James catches, puts up a three, will not go. Rebound to Bosh, back out to Allen, his three pointer: bang!” Never has an NBA championship turned so significantly in a four second sequence. The Spurs, up until that moment, led by five points with just thirty seconds left. They held the series advantage over Miami 3-2. NBA officials already began putting up the yellow tape around the court preparing for the championship celebration. Then, it all came crashing down down in a sequence that culminated in not just one of the biggest shots of the decade, but in NBA history.

The 2010’s were certainly a spectacle for Miami sports. While the Heat consistently shined throughout the entire decade, the Dolphins, Marlins and Hurricanes each had their moments in the spotlight, and they were arguably some of the best sports moments ever experienced. As we dive straight into the 20s, there will surely be many more to come.