UEFA Euro 2020: Drawing Up a Thriller 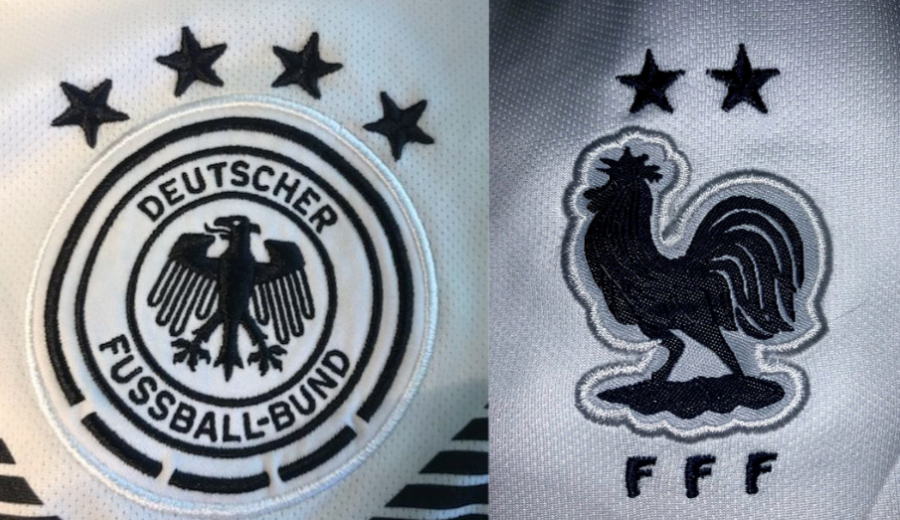 The German and French badges will be a common sight at the 2020 Union of European Football Associations (UEFA) soccer tournament.

The Union of European Football Associations (UEFA) Euro is a soccer tournament that takes place every year between 24 of Europe’s best national soccer teams. The last edition of this tournament was held in France, where Portugal became the 2019 champion. In 2020, the tournament kicks off again all across Europe.

To determine the structure of the team groups and each of their matchups, a draw was held on Nov. 30 in Bucharest, Romania.

The draw itself had its own system. The 24 teams participating were split into six groups, identified by the letters A through F, with four teams in each group. 20 of the 24 teams have already qualified for the tournament. The final four teams will be the winners of a set of playoffs that will take place in March of 2020. The teams are arranged in “Pots” based on their record in the UEFA Euro 2020 qualifying matches.

The soccer teams in the highest pots qualified with the best records. That is, they won more of their qualifying matches than they lost. Below is the order that continued for the next three Pots. The four ‘To Be Determined” teams were placed in the fourth Pot in each group.

Group A resulted with tournament veteran Italy matching up against Turkey, and Wales versus Switzerland. Italy is expected to comfortably win this group with their experienced defenders such as Leonardo Bonnucci and Giorgio Cheillini, along with their creative midfielders such as Marco Verratti and Jorginho.

With this talent, the Italians may be tested by the heroics of Swiss right-winger Xheridan Shaquiri and Welsh attacker Gareth Bale. Group A is filled with creative players, and fans will get to watch them face off as the tournament kicks off on Jun. 12 when Turkey faces Italy.

“Don’t sleep on Italy. They might surprise everyone,” sophomore Diego Moran said.

Group B is where it gets interesting. Current world No.1 Belgium has a bevy of extraordinary players on their roster. Kevin de Bruyne, arguably the best central midfielder in the game, commands their midfield. In addition, Belgian striker Romelu Lukaku has been on fire recently for his club team, Inter Milan.

With their strong defense and world-class goalkeeper, the Belgians seem to be the favorite to outlast the group. They will have competition, however, as Danish Premier League attacking midfielder Christian Eriksen backs down from no challenge and excels at leading the charge for Denmark.

Eriksen is nothing short of remarkable, often saving his Great Danes from defeat time and time again. When these two teams meet on Jun. 18, anything could happen.

With that said, the resurgence of the Russian national soccer team, sparked by their results in the 2018 Fédération Internationale de Football Association (FIFA) World Cup, may leave every country in Group B keeping close tabs on the Russians.

The resurgent Dutch are the favorites to top the very talented Group C . After failing to qualify for the 2018 World Cup, the Dutch youth has rekindled the orange fire. With creative midfielders such as Frenkie de Jong and Donny Van de Beek, and a defensive force led by Matthijs de Ligt, the Dutch have become a fierce contender in the tournament.

“I think that the Netherlands might win the tournament because of their solidity in attack and defense,” freshman Nathaniel Leiva said.

In Group D, a hopeful and youthful English team is looking to win the tournament. After earning fourth place in the 2018 World Cup, the Englishmen are looking to revive and redeem the hype gained during their previous run. However, they must face the team that knocked them out of the 2018 World Cup. Will the Croatian midfield duo of Luka Modric and Ivan Rakitic stand up to the attacking prowess of England’s Harry Kane and Raheem Sterling? Fans anticipate this highly intense rivalry match.

Group E sees 2010 World Cup champion Spain and 2012 Euro winner Poland in search of redemption. The Spanish attack has not been as extraordinary as their former roster was when they won in 2010. However, the Spanish can still make headlines as they seem to be the favorite in Group E.

On the other hand, the Polish golden boy, Robert Lewandowski, is looking to continue his dominant scoring form in the 2020 tournament, making headlines of his own.

Group F: The Group of Death

Possibly the group with the most anticipated matches, Group F holds the most intense rivalries in the tournament.

In one corner, Cristiano Ronaldo and the defending Euro League champion Portugal stand with one of the best offenses in the game. Portugal has some of the most valuable assets in the league in world class striker Ronaldo, who plays for Juventus, along with a young and skilled attacker with an eye for the goal in Joao Felix.

The World Champions lurk in the opposite corner, representing France through their passion for soccer. The French roster contains several creative players such as the quick Kylian Mbappe, the hard-working Paul Pogba and the strong Samuel Umtititi. Pair that with the exceptional goalkeeping of Hugo Lloris, and France has a reliable recipe for repeated success.

Finally, there are the Germans, who, despite having displayed disappointing performances in recent years, seem to be finding their winning stride once again.

With all of these teams vying for Europe’s most coveted prize during the summer of 2020, no one knows what to expect. Every team has a great chance to win it all. One thing is for sure,though; the stars will shine bright in Europe during one of the most intense tournaments in the world of sports.