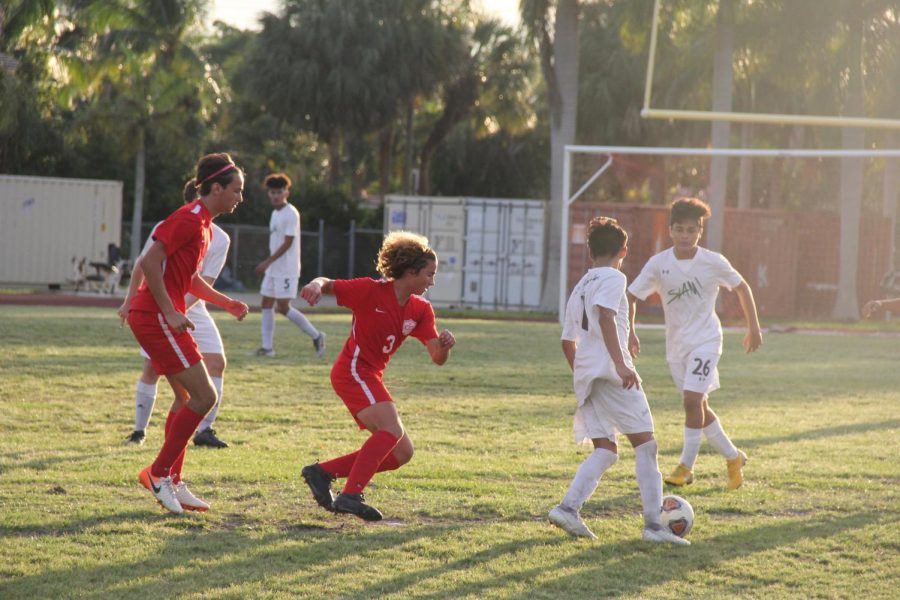 The Coral Gables Cavaliers fighting to regain possession of the soccer ball from SLAM, where the Cavaliers showed their offensive prowess with a 5-1 victory.

The Cavalier Soccer team is starting off their season on a strong wave of victories. After months of conditioning and hard work during the preseason, the boys’ soccer team has won their first six games of the season, starting off undefeated. The Cavaliers have taken down Miami High School 6-0, SLAM 5-1, Southwest 1-0, Felix Varela 3-0 and TERRA 3-0.

In the 2018-2019 winter soccer season, the Cavaliers were on a roll throughout the entire season, winning games left and right on their home field and away from it. Their torrid pace unfortunately ended with a district finals championship loss to Christopher Columbus High School.

This year, the Cavaliers had a chip on their shoulders and have come back better than ever. To start their 2019-2020 campaign, on Nov. 13, they claimed victory against their arch rival, Christopher Columbus, emerging victorious by a score of four goals to none, with credit to senior Kevin Espinoza and sophomore Etienne Montigny, who scored a pair of goals each. Columbus was threatening on the attack but Gables was able to stay strong as a team and keep a clean sheet.

Leading by only one goal at halftime, the Cavaliers knew that if they wanted to win the game, they needed to expand their lead, so they intensified their efforts in the second half and tallied three goals.

With the relentless mentality they exemplified during their Columbus rematch, the Cavaliers hope to continue their winning ways and rise up against any challenge this season.

Communication within the team and familiarity with each player’s respective roles are the keys to success for the Cavaliers. Having a strong sense of unity is the most important factor when it comes to playing as a team and, not only do the players focus on improving themselves, but they also focus on improving those around them as well.

“Even from my point of view, I can tell they have strong teamwork skills. They play at an advanced level, which makes for a competitive game, and I hope they get to where they want to be,” senior Maha Essakali said.

Many of the seniors on the Cavalier Soccer team, having played three previous seasons on the soccer field in a Cavalier uniform, emphasize that without their winning mentality, they would never be able to get over the hump. With the combined efforts of their players, they can beat any team if they set their minds to it.

“We are going to work hard and continue working in the same way so we can stay undefeated. We will not stop until we reach all of our objectives,” senior Kevin Espinoza said.

To keep their undefeated streak alive, the boys plan to maintain the rigorousness of their practices in order to be ready for their games. They will continue to work on their personal weaknesses and collaborative one in order to move forward and reach all of the goals they are shooting for this year. Now, more than ever, the odds of the Cavalier Soccer team winning a district championship seems to be increasingly trending in their favor.