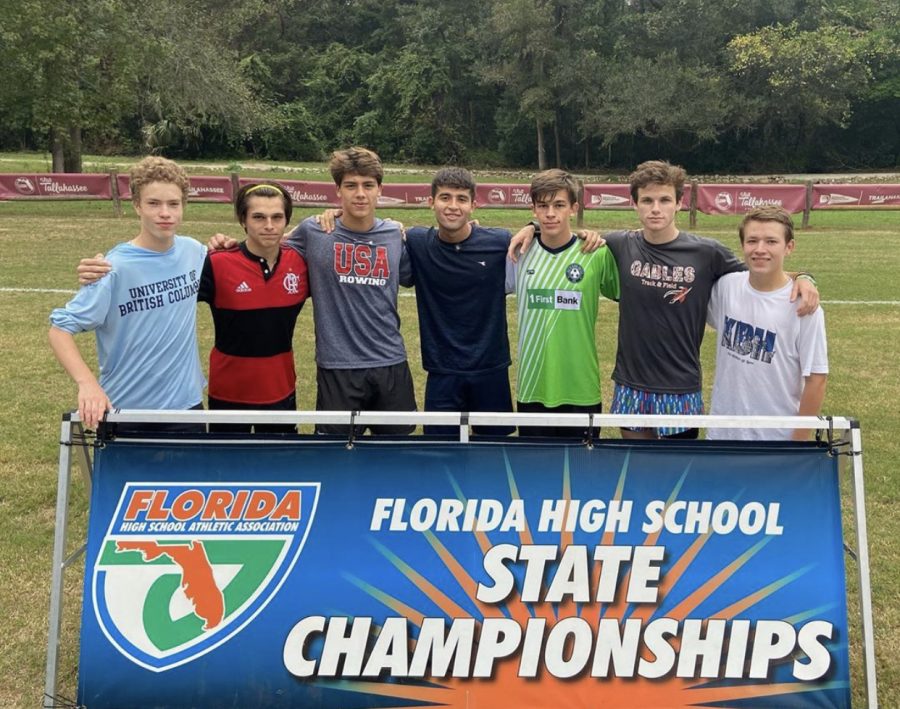 The runners at the cross-country State Championships, ready to run their personal bests.

In order to qualify for the state competition, teams were required to compete in a regional competition. Additionally, a school must make it into the top fifteen and seven Cavalier runners propelled Gables to this prestigious ranking.

“We have a very tough region, so to see the boys qualify for the state championship tournament makes me very happy,” Coach Nelson said.

Having the state competition situated in Florida’s capital, the top runners in the state struggled. The lower temperatures and the cold air were factors that were unfamiliar to the runners and made running significantly more difficult. Under these conditions, the body has difficulty giving much needed oxygen to the functioning muscles during vigorous exercise. Moreover, breathing can become incredibly painful when running as the cold air can irritate the throat and lungs. Despite this, six of the seven runners that were representing the Cavaliers recorded personal best running times.

Unsurprisingly, senior captain Colin Wilson was one of these six, running the 5,000 meter run in sixteen minutes and three seconds. Wilson’s new personal best time placed him among the top six scorers at the 2019 state tournament, but it also positioned him in the top five percent of all Floridian runners participating in the event.

“Being in the top twenty for the 5,000 meter run in my last year at Gables makes me really proud. This was the last time I could really make my impact, and I am so happy that I did,” senior Colin Wilson said.

Overall, the Florida High School Cross Country State Championship tournament was a huge success for the Cavalier Cross Country team. In a competitive event under unfamiliar weather conditions, many of the Cavaliers performed better than they could have ever hoped to.

As the excitement for fall sports dwindles with the arrival of winter sports, the Cavalier Cross Country team and Coach Nelson can rest assured, knowing that they put everything they had into each of their runs. Evidently, their accomplishments throughout the season capture that essence.