Lady Cavalier Golf Goes Out with a Bang at Regionals 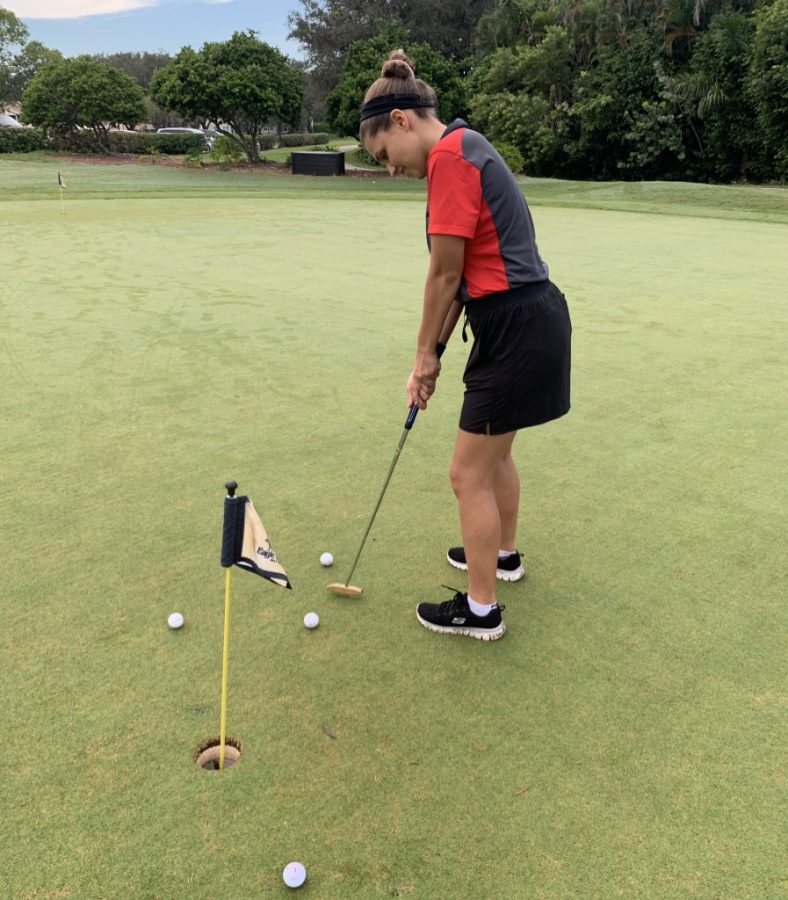 After a lengthy season of exhausting practices, competitive games and a successful performance at the district golf competition, the Lady Cavalier Golf team advanced and participated in the regional golf competition. On Tuesday, Oct. 22, the Lady Cavaliers competed against other female high school teams for a chance to advance to the state competition, playing on an extremely demanding 18-hole course at the Eagle Trace Golf Club in Coral Springs. The four-girl team did a spectacular job despite all of the obstacles they faced and with their technique and experience, they showed what Cavalier determination is really like.

On the morning of the match, the girls took advantage of their early start to the day to practice for a few hours on the range and putting green. Once the game started, each girl teed off separately with their own group of competitors. It was an exhausting game, lasting a total of six hours.

The course was like something out of a movie; not only was it full of water hazards and sand traps, but it was also designed for the Honda Classic, a Professional Golfers’ Association Tour competition, meaning that high school girls had to play at the level of professional golfers in order to excel. Despite this, this is exactly what the Lady Cavaliers were determined to do.

“We played well against a competitive field of ladies on a very tough golf course, I’m nothing except proud of the girls,” Coach Nelson Villegas said.

A major challenge that the girls faced was having to play with a different set of rules in this game. So far throughout this season, players have been using the double par rule. This is where a ball can be picked up if the player already made enough strokes on that hole to have double the par. However, during Regionals, competitors had to keep the ball in play even if their score exceeded double par.

Adding to the difficult regional rules, the officials mandated the out-of-bounds rule, demanding a two-stroke penalty if the golf ball landed outside of the established boundaries. The Lady Cavaliers were also accustomed to teeing off from the red markers. In this match, officials decided that the girls had to hit the ball from the white markers instead, widening the distance between a player and the hole.

The Lady Cavaliers took on the challenge and hustled until the very end. Thais Forbes finished with a total of 98 strokes. Although Forbes and her teammates performed very well, it was unfortunately not enough to take them to the next level.

With 43 team players and ten individual qualifiers for a total of 53 girls participating in the contest, the competition was stiff. Exactly 20 schools showed up to vie for the chance to move on to state competitions.

Although the Lady Cavaliers did not advance to States, they truly proved themselves as talented golfers. Just the fact that they were able to compete in the regional golf competition was a testament to the skills that they possess. Undeniably so, these Lady Cavaliers exceeded all possible expectations through all of the ups and downs during the 2019 fall season.