On Par With the Pros: Cavalier Golfers Take on Districts 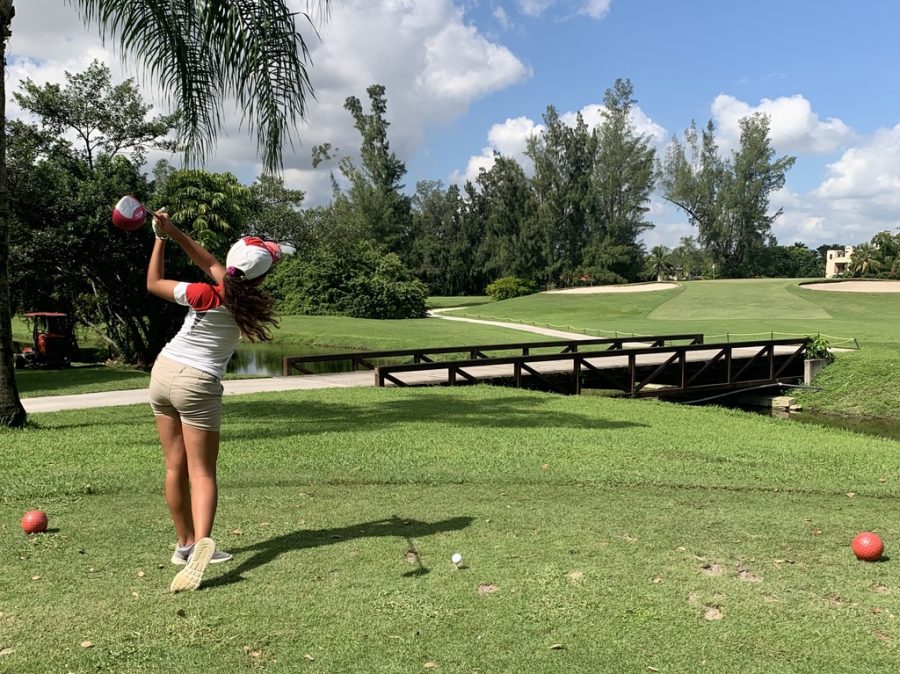 Cavalier golfers practice their swings before striking the golf ball to correct their form and aim.

After many months of practicing under the sun and competing among the best teams in the district, the Cavalier golfers finally competed in their district championship competition. The boys’ competition was held on Monday, Oct. 14, followed by the girls’ match on Tuesday, Oct. 15.

Determined to keep their season alive and participate in the state championship competition and the postseason games, the Cavaliers faced an immense amount of pressure going in to one of the most important matches of their season.

The boys’ squad arrived at Redland Golf and Country Club early Monday morning with one goal: to get the job done. The golfers practiced on the putting green and the driving range to prepare for the intense competition. Unfortunately, two Cavaliers were forced to withdraw from the match at the hands of injuries and illnesses. With added pressure, the three remaining Cavaliers had no choice but to step it up.

A ‘shot gun start’ initiated the match. Each group of golfers began from the first hole of the course and all of the players had to wait for their turn, following those in front of them.

Usually, the boys’ team tees off from the white markers, which are at a relatively short distance. However, for the district championship match, the golfers started from the blue markers, meaning that the golfers had to hit the ball even farther to reach the hole, adding yet another obstacle that they had to overcome.

“I personally thought that the competition was very difficult. It was my first time playing on that course. It was also somewhat stressful because of how many teams and competitors there were,” freshman Austin Yagoda said.

Six boys’ golf teams competed in the district competition including those from Ronald Reagan Senior High and Miami Beach Senior High. The golfers played for five grueling hours while the unforgiving Miami sun beat down on them. The tournament ended at the peak of noon. Despite the setbacks and the pressure, the Cavalier golfers persevered and individually performed exceptionally well.

Following the boys’ match, the girls’ team played at Miami Springs Golf and Country Club the next day. At the break of dawn, the Lady Cavaliers were practicing on the driving range and the putting green. The tournament began shortly after and the girls set out to swing. Unlike the boys’ match, each group of golfers started individually at separate holes, allowing for a much more efficient and quicker match.

The girls’ district competition was much smaller than the boys’ match. Only two full teams and a few groups of two or three individuals competed in the match. However, the Lady Cavaliers faced tough opponents from Doral Senior High and had to work hard to try and outscore them.

Against all the odds, the Lady Cavaliers earned the second place spot as a group, showcasing the talent of their team members.

“While we practice all the time and try to perfect our game, there is still room for improvement. We mess up all the time, so we always have an open mindset and always try our best to learn from our mistakes,” sophomore Kaylah Clethen said.

Both of these golf matches were twice as long as traditional regular season matches. Still, the Cavaliers gave everything they had on the golf course. For some Cavalier golfers, this district competition was their last game of the season, and a select few will be advancing to the regional championship competition, playing at Eagle Trace Golf Club on Tuesday, Oct. 21 where they will radiate Cavalier sportsmanship and effort.