The Miami Heat Torch the Spurs in Their First Preseason Game 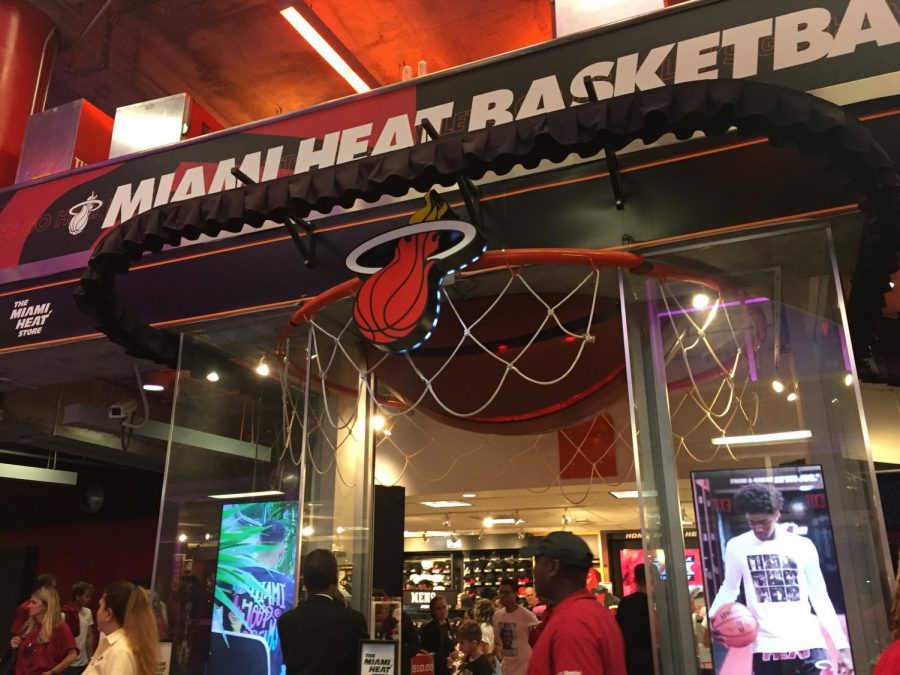 An inside look into the Miami Heat's team store inside of the American Airlines Arena.

Returning from what was considered a disappointing season, the Miami Heat went into their first National Basketball Association (NBA) preseason game going head-to-head against the San Antonio Spurs. The game was played on their home court at American Airlines Arena.

Coaches from both sides entered the contest with legendary resumes. Heat head coach Eric Spoelstra has garnered himself a 484-320 regular season record, eight postseason appearances, six division titles and a pair of NBA championships—one of which came from the hands of the Spurs. As for the Spurs’ Greg Popovich, he has led the Spurs to 22 consecutive winning seasons and five NBA championships within the last two decades.

Once the game began, both teams came out battling. The Heat fell behind quickly, trailing 18-12 due to Dejounte Murray’s playmaking ability. The Heat would quickly come back, thanks to rookie Tyler Herro’s five point spurt which allowed them to close out the first quarter at a 23-22 deficit.

Within the opening seconds of the second quarter, Goran Dragić threw a lob to Miami’s high-flyer Derrick Jones Jr. for an emphatic dunk, quickly shifting the momentum in Miami’s favor. Right after that, the Heat were able to force a turnover and made quick work of it, easily scoring in transition.

With just under ten minutes to play in the second quarter, Herro continued to show out during his debut. The rookie was making great work of off-ball screens and using his shot-creating ability to his advantage, nailing back-to back jumpers and right-handed runners to the basket. 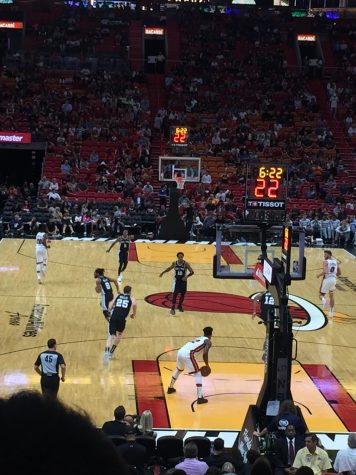 Forward Jimmy Butler joined in on the fun late in the second quarter, scoring his first field goal in a Miami Heat uniform. The Spurs made a quick run within the last two minutes of the second quarter, but still trailed the Heat 53-46 entering half time.

“The Miami Heat went all in and showed great defensive effort, clamping and restricting the Spurs to not do much on offense, allowing us to take advantage,” sophomore Andrew Garcia said.

At the start of the second half, the Heat began to completely assert their dominance over the Spurs. Butler opened the third with a quick pull-up three-pointer in transition and then caught an alley-oop from former Duke star Justise Winslow.

Patrick Mills and Rudy Gay from the Spurs were doing everything in their power to keep the Spurs in the contest. The score was kept close up until the final three minutes of the third quarter where the Heat began to run away with a definitive lead, and they closed out the third period on a 16-2 run, making the score 81-64 entering the final quarter of play.

With the win easily secured, the Heat put in players who are fighting for a roster spot, including big man Chris Silva. Silva is currently competing for a two-way contract on the roster. Silva impressed fans with a 16 point, 9 rebound, two steal and two block performance in only 14 minutes of action.

“The Heat outplayed the Spurs in every aspect last night. This is just a taste of what is to come this season,” sophomore Katerina Hernandez said

The rivalry between the Miami Heat and the San Antonio Spurs has always been quite the spectacle to watch and this game proved no different. Despite the score difference, both teams gave fans a taste of how well their teams will perform heading into the 2019-2020 NBA season and, fortunately, the narrative for the Heat projects to be a good one yet again.