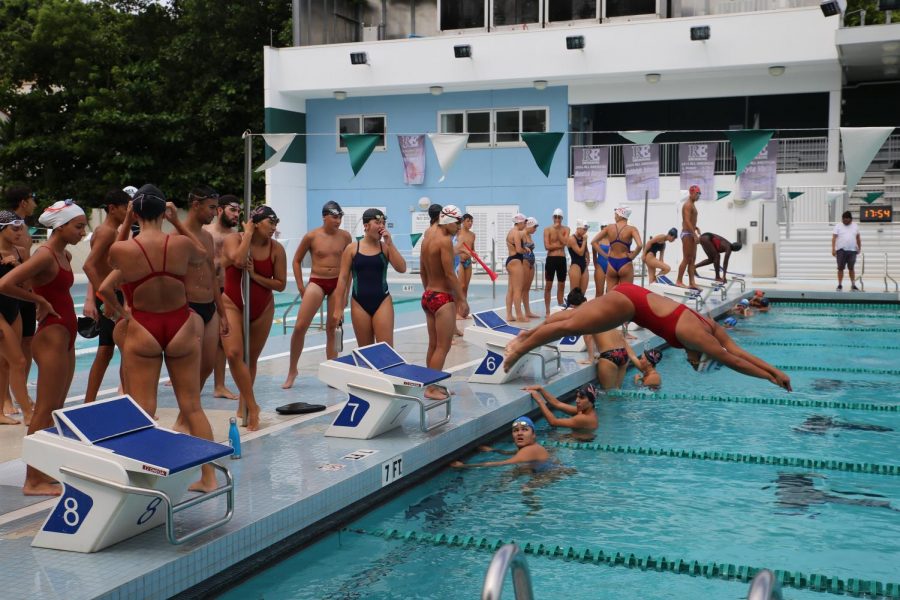 Several members of the Cavalier Swimming team stand beside Ransom Everglades High School's pool as others plunge into the water.

The summer of 2019 has come and gone, and the 2019 fall sports season is finally upon us. Coral Gables Senior High’s very own swimming team has been practicing since July 29 to prepare for the upcoming season. As always, the team has been working hard with a goal in mind: to compete for a shot at a district championship.

The Cavalier Swimming team has always been strong, competing amongst the best boys’ swimming teams in the district. However, the boys’ team took a significant hit this summer. Once last year’s seniors graduated, there was a significant void of talent within the team. Despite this, the new influx of swimmers have displayed a lot of potential and have been great additions to the team thus far. With hard work, the team should be able to come back stronger than ever.

As of this year, the Lady Cavalier Swimming team has a new team captain—junior Nora Gonzalez—who is excited to swim with her senior friends, work with her new teammates, and unify the team to the best of her ability in hopes of reaching new milestones throughout meets.

Both Nora Gonzalez and head coach Gerry Couzo’s expectations for the swimmers this season remain the same: show up to practice and work hard. As always, the team will be training competitively as it had been in previous years, aiming to get as many swimmers as possible to the district championship competition and perhaps even the state competition.

One key aspect of the team’s culture that Coach Couzo believes will enhance the team’s performance is making sure that there are no negative attitudes from the athletes on the swimming team.

“I want kids who want to be at the pool working hard every day to get better and faster. I will not be keeping any negative-minded athletes who are not helping us get better,” Coach Couzo said.

This year, the district has added new teams which will significantly increase the competition. The boys’ team is looking to bring home their first district championship while the girls’ team is looking to end a three-year drought of finishing as district runner-ups. Keeping each other’s spirits up and coming together as a team will help the Gables swimmers excel during the upcoming fall season, one that is destined to be a successful one for our Cavaliers.