Athletes of the Week: September Edition 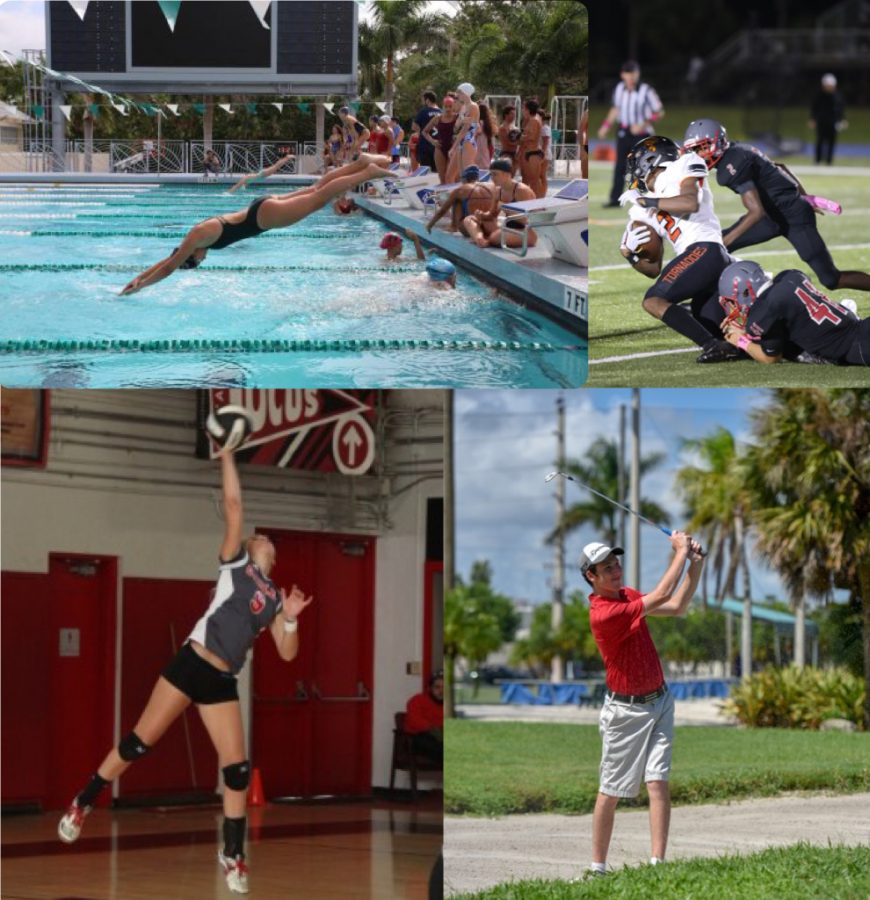 The month of September's Athletes of the Week feature talent from many of our fall sports.

As school has finally sprung back into session over the past month, so have the fall sports that many of the talented athletes at Gables participate in. Whether through football, cross country, volleyball or any of the various other sports played during the fall season, our Cavaliers are always trying to make a name for themselves and stand out among the crowd at Gables, as well as throughout the local, state and even national level. As a result of this drive for success and recognition, many of the athletes put in countless hours of hard work and dedication in order to get a shot at achieving their dreams. Looking to support our athletes on their journey to stardom while recognizing and congratulating them on their achievements, the Gables community sets apart one student every week that has proven worthy of recognition on the local stage. These students are referred to as Athletes of the Week, and each has either made a significant contribution to their own team or has accomplished a remarkable task individually within their own sport. Below, the athletes recognized within the month of September will be featured and highlighted as a way to further give recognition to their accomplishments.

Week of Aug. 26, 2018 – Sept. 2, 2018: Isabella Morina. Morina was recognized during this week for her outstanding performances against both Miami High and South Miami, boosting the Lady Cavaliers’ Volleyball team to victory with her 14 kills, 12 aces and 5 digs across both matches. She helped the Cavs win 3-0 in both matches and has been a pivotal player for the Girls’ Volleyball team this year.

Week of Sept. 2, 2018 – Sept. 9, 2018: D’Angelo Paul. This senior defensive tackle was recognized for his performance in the Cavaliers’ 14-8 victory over Miami Edison High School. Paul managed to rack up six tackles, three assists, two tackles, one sack, one forced fumble and one fumble recovery all within the same four quarters. Paul, over the course of his four years at Gables, has been known for his commitment to the team and his dedication to the sport. When asked about how he felt to have been named Athlete of the Week, Paul stated that “It was great to know that [he’d] been recognized and that his hard work was paying off.” He also stated that he hopes the team is able to win a district championship and that he plans on continuing playing football through college.

Week of Sept. 9, 2018 – Sept. 16, 2018: Roger Moore. Recognized for his outstanding performance in the Cavaliers’ football game against Miami Killian Senior High, Moore was named Athlete of the Week for the week of Sept. 9, 2018. In the game, Moore was able to reel in three receptions for a total of 67 yards and two touchdowns, leading the Cavaliers to a 28-14 victory over the Cougars. As a result of the time and effort Moore puts into working on his game, he has become one of the team’s lead receivers and says that he wishes to play in college and beyond. Furthermore, upon being asked what it was like to have contributed in such a way to the Cavs’ victory, Moore stated that “it means the world to me to know I was such a big help in taking my team to the win against Killian.”

Week of Sept. 16, 2018 – Sept. 23, 2018: Stephanie Monroy. During this week in September, sophomore Stephanie Monroy was recognized for her performance in the swim meet against Braddock Senior High where she won the 100m breast event. She clocked in a time of 1:14:28, placing her first in the event, boosting the team’s score and ultimately contributing to a Cavalier victory. “When I won my event at the swim meet, I felt ecstatic knowing that I was able to score some points for my team so that we were able to come out with a win,” said Monroy upon being asked how she felt after the win.

Week of Sept. 23, 2018 – Sept. 30, 2018: Max Rego. Over the span of this week, senior Max Rego was able to secure his spot as Athlete of the Week as he golfed a 40 against TERRA and a 41 against Miami Beach. Dedicated to the sport and with his hard-working spirit, Rego has the potential to play at a higher level, stating that “[his] current plans are to try and play on the club team in college, and later attempt to walk on to the actual team.” When asked what his goals were for this season specifically, Rego stated that he hopes to make a return to states and is hopeful he will after improving his scores from last year.

As a collective school and community, Coral Gables Senior High would like to congratulate all of these talented athletes on their most recent accomplishments and wish them the best of luck in the future. In addition, these athletes, who embody the hard-working and talented Gables spirit, are further recognized and congratulated for representing the school in the way they do. Go Cavs!