A Battle for Miami: UM vs FIU 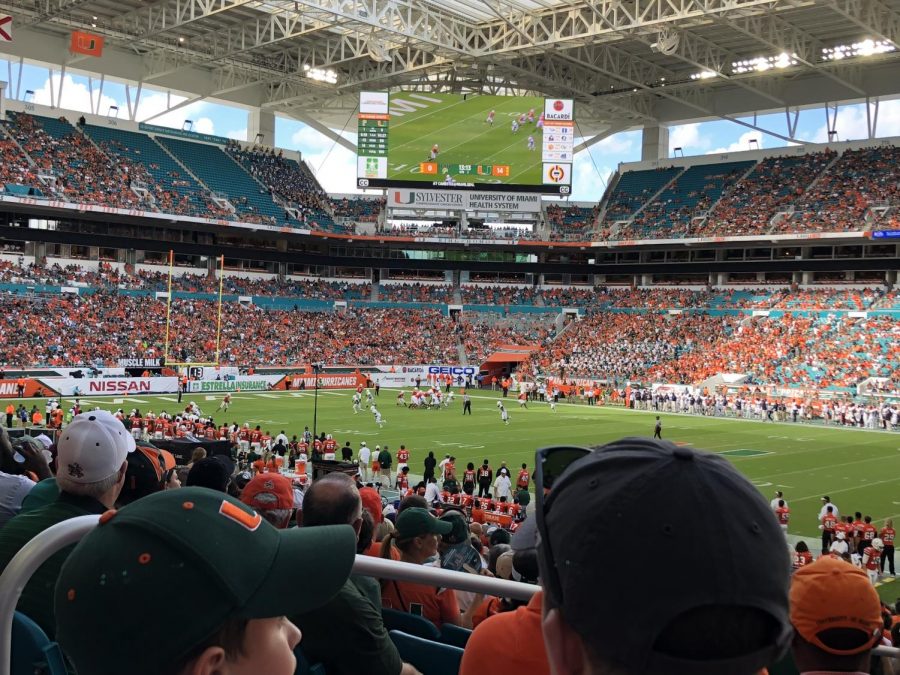 For the first time in eleven years, the battle for local dominance between the University of Miami (UM) Hurricanes and the Florida International University (FIU) Golden Panthers experienced a resurgence on Saturday, Sep. 22, when the two competitors went head-to-head at Hard Rock Stadium. Despite the game being considered a “scrimmage” on both sides, college football fans saw all their wishes realized, as the Canes walked away with a dominating victory over the Panthers by a score of 31-17. In doing so, they improved their record to 3-1 on the season and are comfortably in the midst of a 3-game win streak after having seen their season come to an abrupt end in 2017, in which they lost 4 games in a row.

Since the game was not considered to be one of much value, the head coaches on both ends experimented with their several assets on the field and gave many an opportunity to prove themselves on the roster. Freshman quarterback N’Kosi Perry had a remarkable performance and, as a result of his dazzling effort, has staked a serious claim to be in the running for the starting quarterback job. Coming in at the 7:35 mark in the first quarter to replace Malik Rosier, Perry’s display of talent was nothing short of a masterpiece on the field. By halftime, he had completed 12 passes on 13 attempts and scored two touchdowns to receiver Lawrence Cager and tight end Brevin Jordan.

“N’Kosi Perry really did a great job out there. He kept his cool and did what he knows he could do. It is safe to say he impressed everybody with the way he played,” sophomore Jose Gonzalez said.

Despite the impressive offensive onslaught handed to the Panthers by the Canes, the defense they displayed is not to be undermined. During the first quarter, the Canes’ defense restrained every single play by the Panthers and kept them from gaining a single yard on their offensive opportunities. At the end of the second quarter, in which the Canes extended their lead to 24-0, the Panthers had only gained a total of 15 yards on offense.

It would not be until the fourth quarter that the Panthers would finally break through, scoring their first touchdown on a 35-yard pass from quarterback James Morgan to receiver CJ Worton with just under seven minutes remaining in the game. Although a full comeback was unattainable, the Panthers did put forth a valiant effort and scored another touchdown, also by Worton, and a 3-point field goal.

“For a long time, the game was pretty one-sided. The Panthers made a late comeback, despite the deficit, and it really allowed for a great finish to the game,” junior Kluivert Suquino said.

Despite the utter dominance exhibited by the Canes in the first half, the comeback spearheaded by the Panthers certainly showed determination and grit in the final minutes of the game. Although the two local rivals will not be facing each other again during this college football season, there is still a lot of football to be played and a lot to prove on both sides. The University of Miami will look to continue their winning ways when they play the University of North Carolina on Sep. 27, and FIU aims to bounce back from a tough loss on Sep.29 when they play Arkansas Pine Bluff. Whether you are a Cane or a Panther, there is no doubt that Miami college football will be a spectacle to watch!