Heat Eliminated by 76ers in Game 5 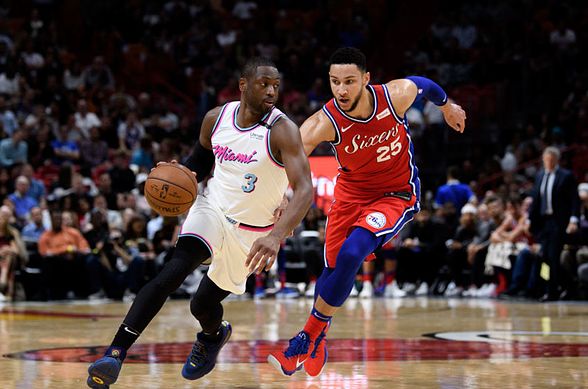 Heat guard Dwayne Wade drives to the basket during the Heat's defeat by the 76ers in Game 5.

On the night of Apr. 24, the Miami Heat’s season, in addition to their playoff hopes, came to an end with a tough, double-digit loss to the Philadelphia 76ers in Philly. The game, ending with a score of 104-91 in favor of the 76ers, sends the 76ers to the Eastern Conference Semi-Finals, where they will play the victor of the Milwaukee Bucks and the Boston Celtics series.

Game 5, and the series in its entirety, indisputably served as a challenge for the Miami Heat as they lost the series 4-1. Led by the formidable duo of Joel Embiid and the “LeBron-esque” abilities of Ben Simmons at the small forward position, the 76ers proved to be a dominant force on both the offensive and defensive ends of the court. The dynamic 76ers duo combined for 44 points and 22 rebounds. However, the standout performance that firmly slammed the door on the Heat’s playoff hopes was held by guard J. J. Reddick, whose 25 points and 50% field goal percentage from beyond the arc made the difference in a closeout game.

“This game was played well by both sides, but it’s impossible to not mention the offensive efficiency and effectiveness of the Philadelphia 76ers,” sophomore Jaime Perez said.

Although the Heat did showcase some strong player performances, in addition to a last-ditch effort to spark some momentum, the deficit they had to overcome proved far too difficult to recover from. Kelly Olynyk tallied a team-high 18 points to go along with 8 rebounds and 7 assists off the bench, and Tyler Johnson stacked 16 points before being fouled out with less than 5 minutes on the clock in the fourth quarter.

Throughout the first half of the game, neither team could gain a significant competitive edge on the other, with a score of 23-21 in favor of Philadelphia at the end of the first quarter and a score of 46-46 at halftime. After halftime, however, all the momentum Miami had used to remain within a few possessions of the 76ers was soon lost. By the time six minutes remained in the third quarter, the Heat had gotten outscored 20-8 in the second half and were facing a 12-point deficit with the score being 66-54. What was once a very close game had turned into a blowout and the demise of the Heat, repeating a story that had become common during this particular series.

“Things were looking pretty good going into halftime, but the energy obviously wasn’t there in the second half against the 76ers,” freshman Jose Gonzalez said.

At the third quarter’s end, the 76ers erupted for 34 points and held a lead of 14 points against the Heat. They continued to stack up the points in the fourth quarter and ultimately walked out triumphantly winning their first playoff series since 2012.

Although the Miami Heat’s playoff berth is over, there is still plenty of basketball to be played as the Eastern and Western Conference Semi-Finals are just underway! Click here to stay tuned and updated with playoff basketball!