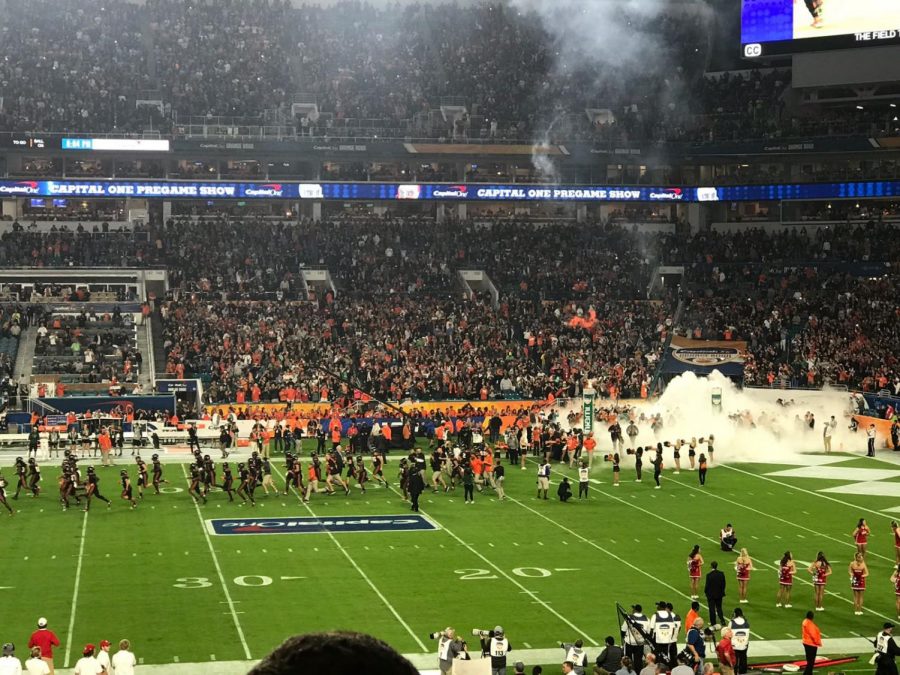 Following one of their most successful seasons in recent years, the University of Miami (UM) Hurricanes were set to play in their own Hard Rock Stadium one more time for the Capital One Orange Bowl against the University of Wisconsin. With all preparations made, the game was set to take place at 8:00 P.M. on Dec. 30 in Miami Gardens, Florida. UM fans were particularly anxious for this game as they were unsure which Miami team would show up to play: the team that had started with 10 straight wins, or the team that had lost to an unranked University of Pittsburgh and suffered a huge, 35-point defeat to Clemson in the ACC Championship game. The Wisconsin Badgers were picked to win in most predictions due to their higher ranking and questions surrounding the Canes’ abilities after two bad losses. However, many Canes fans argued that the home field advantage would give them the edge they needed to power past Wisconsin.

UM played tough early as they recovered a fumble on the Badgers’ very first drive. The Canes failed to take advantage of this opportunity as they were forced to resort to a long field goal, which the kicker was unable to convert into points as the ball sailed wide of the uprights. Keeping their momentum, the Canes put their offense back on the field quickly to add a second touchdown, ending the first quarter with UM in the lead 14-3. Wisconsin would quickly turn the tables in the second quarter. The Badgers received excellent field position after an interception and quickly put the ball in the end zone to get their first touchdown of the game. Wisconsin would continue to control the remainder of the half by getting UM’s offense off the field quickly and scoring two more touchdowns. Miami head coach, Mark Richt, would  go into the locker rooms heated after being given a personal foul for arguing with the referees. Meanwhile, the Hurricanes finished the second quarter disheartened as the Badgers took control of the score board with a 24-14 lead.

Miami was able to overcome their second quarter woes by being the first to score in the second half, getting a touchdown to narrow Wisconsin’s lead. UM’s next possession was not as successful as Wisconsin would intercept a ball in the end zone to preserve their lead. Wisconsin would get in one more field goal before the third quarter ended, but UM responded with a field goal of their own early in the fourth quarter to keep the Badgers at a narrow 3-point lead with the score at 27-24 with ten minutes left to play. Wisconsin would score one more touchdown, and a missed field goal by UM almost assured their fate. The Badgers played a strong last three quarters to overcome an early deficit and take the win with a final score of 34-24.

“UM was the underdog, so they did well by keeping the score close between them and Wisconsin the whole game,” junior Jordan Morejon said.

Although the Hurricanes had a disappointing end to their season, they still had one of their best seasons in recent memory. It has been over ten years since Miami had ten or more wins in a season and they had their first appearance in the ACC Championship this year as well. Many have stated that this season has shown that UM football is back, and with Mark Richt in only his second year as head coach, many believe he will continue to guide the team on an upward path. UM may have lost this year’s Orange Bowl due to costly turnovers that gave away their momentum, but watch out for them to come back even stronger next year.