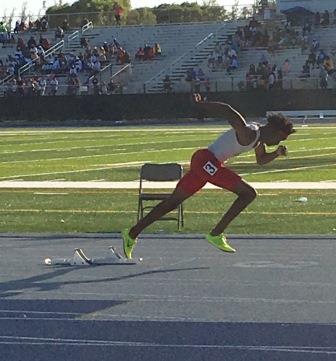 Walker takes off during his 200-meter dash.

The Gables Track and Field team performed incredibly at the Regional meet and managed to get a few athletes to advance to the state meet that will take place in May. Numerous athletes made it to Regionals this year and they all performed very well in their individual events. Nearly all of Gables’ relay teams qualified for Regionals as well and had some great results. At the end of the day, the athletes were tired, but very satisfied by their results. It was a great meet all around and hopefully some athletes will return next year to produce even stronger results.

“I am really sad this season is over because it was my last year, but I achieved all my goals and it was a great season,” senior Kathryn Boylan said.

The girls’ 4×100-meter and 4×400-meter relays both qualified for Regionals and both missed out on improving their season best by less than a second. Unfortunately, the girls’ 4×800-meter and boys’ 4×100-meter relay dropped the baton and were disqualified from the race. Gables’ fortune turned around, however, when the 4×400-meter team took to the track, improved upon their season best and set a new school record. The boys’ 4×400-meter team finished in the top eight for Regionals and provided a great finish to the meet for Gables. During the individual events, senior Amir Rasul finished third in the 100-meter dash and qualified for the State meet. The other state qualifier is senior Antwaun Walker, who finished second in the boys’ 200-meter dash and fourth in the boys’ long jump. Both of these athletes had great performances in order to make it to their last race as a Cavalier.

“I aim to get top three in the 200-meter run and the long jump at State Finals. It was a good season, but I still have a lot to work on before states,” senior Antwaun Walker said.

The Cavaliers had some truly great performances during the Regionals meet. Be sure to congratulate them on their great performances during the whole season if you see them. Many of the track and field team members were also seniors and have now finished their running days at Gables. It will be sad to see these Cavaliers go, but hopefully new blood will rise up to fill the gaps left behind.