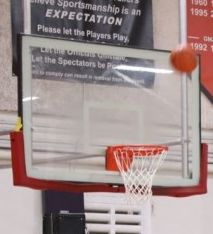 The NCAA Basketball Tournament brings the top 64 collegiate teams of the year together to crown one as the champion.

It sure is sweet to be a part of the final 16 teams in the NCAA Basketball Tournament. All of these teams have made it past two rounds already and only have four games between them and the title of collegiate basketball champions. While each team would like to be crowned champion, right now they are focused on winning the next game and advancing to the Elite Eight. All of the teams that made the NCAA Tournament this year worked extremely hard to get into the tournament and have had great seasons. However, the tournament is winding down now and the games are getting tougher. Each team left still has the dream to become the new champ, but they will have to fight the other 15 to earn it.

Each region for the NCAA Tournament has had its own twists and turns during the past two rounds. In the South, the games have mostly gone as predicted, but are going to become much more difficult now because of the strength of the four remaining teams. The No. 1 ranked Kansas Jayhawks will be facing off against the No. 5 ranked Maryland Terrapins as the No. 3 ranked University of Miami Hurricanes take on No. 2 ranked Villanova Wildcats. These teams were considered the top 5 in their region when the tournament started and are sure to bring some intense matchups you will not want to miss.  The East region has been a little more unexpected as 2 top teams were ranked outside of the top 5. However, the No. 1 ranked team for the East region, the North Carolina Tar Heels, has remained in the tournament and will battle the Indiana Hoosiers in their next game. It is the other Sweet Sixteen match in the East that has people guessing a little as the No. 6 ranked Fighting Irish of Notre Dame take on the No. 7 ranked Wisconsin Badgers. Neither of these two teams were expected to come this far. The fact that they have defied expectation, along with their still very high rankings, means they could definitely be a threat in the rest of the tournament. The West region has been nearly a perfect example of what is supposed to happen in the tournament as only the top 4 ranked teams in the West remain; it’s going to be the No. 1 ranked Oregon Ducks versus the No. 4 ranked Duke Blue Devils and the No. 2 Oklahoma Sooners against the No. 3 Texas A&M Aggies. Although this part of the bracket has remained almost picture perfect so far, it may not remain that way because Duke is ranked lower than Oregon, but the Blue Devils are actually predicted to win and move on to the Elite Eight. The Midwest region has been the most unexpected. The No. 1 ranked Virginia Cavaliers will go up against the No. 4 ranked Iowa State Cyclones as expected. The other part of this region was the unexpected part as the No. 10 ranked Syracuse Orange will take on the No. 11 ranked Gonzaga Bulldogs. Of all the remaining sixteen teams, these two were the least expected to still be in the tournament, but do not count them out, as they have already proved that they are better than expected.

This year’s bracket has been mostly expected and there were not very many radical wins. All four No. 1 teams from each region remain in the Sweet Sixteen, and the lowest ranked team remaining is Gonzaga, who was still ranked pretty high as the 11th best in their region. The lowest ranked team to advance past the first round was the 15th ranked Blue Raiders of Middle Tennessee. They were in the Midwest region and were unable to advance beyond the second round after they were defeated by Syracuse. It seems unlikely that there will be any Cinderella stories this year, as the only two teams remaining in the bottom half of the bracket will face each other in the Sweet Sixteen, allowing only one to remain. The remainder of the tournament is still sure to be interesting, as the high rank of the remaining teams ensures some great matchups. The games to advance to the Elite Eight will take place  Mar. 24-25. To find out more about this year’s bracket, click here.